I have asked the same question at the Dhamma Wheel topic: Sakkaya Ditthi is not self-view!!

1. At one time the Blessed One lived in Jīvaka's mango orchard in Rajagaha.

2. Then a certain monk approached the Blessed One, worshipped and sat on a side.

3. Sitting on a side that monk said to the Blessed One: “Venerable sir, knowing how and seeing how does the self view get dispelled?”

10. “Monk, knowing and seeing thus self view gets dispelled.”

In my view or opinion, taking:

They are just the synonym.

Your 3 suttas, which near by each other, describing each other like this:

Diṭṭhi means misunderstanding of causes and effects, clinging-aggregates which is anattā as attā.

Anu is prefix which means often.

Micchā is prefix which means mistake.

These clinging-aggregates are the Sakkāya described by the Blessed One.

So, sakkāya-micchā-anu-diṭṭhi means often mis-understanding, micchā-anu-diṭṭhi (verb act as noun), of sakkāya (object), causes and effects, clinging-aggregates, which is anattā, as attā. See note0 below for more information.

Note0: (I have to use image, because I can not make underline in stackexchange. The same format are relating to the same format. )

Above pāli appear in these suttas: 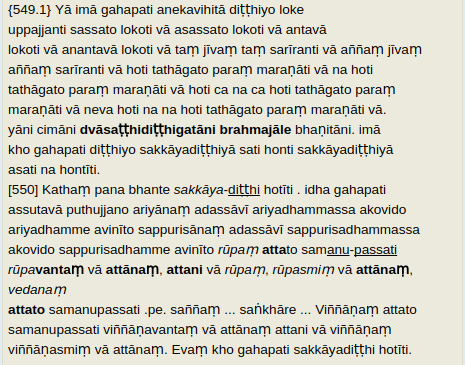 It is completely from pāli.

they meditate by observing an aspect of the principle inside and outside.

Note3: Your 3 suttas, which near by each other, describing each other. Mostly words of them can use in the other sutta, such as anicca, dukkha, anatta, of these 3 sutta contexts all refering to saṅkhata (clinging-aggregates), which means arisen by causes. So, it can use to explain each other like appeared in Vinaya. Mahā (1) Anattalakkhaṇasutta:

‘It is perishable (anicca), Lord.’

‘And that which is perishable, does that cause pain or joy?’

‘And that which is perishable, painful, subject to change, is it possible to regard that in this way. ‘This is mine, this am I, this is my self (atta)?’ ‘That is impossible, Lord.’

So, those 3 suttas is synonym of each other. For the example:

A: I often understand of you as permanent person.

B: I misunderstand of you as permanent person.

C: I understand of you as my dear forever (misunderstanding sakkāya as attā).

It looks like when I said หนึ่งคูณสองเท่ากับสอง, you cannot enlighten what I said. But if I said "1x2=2", you can get it.

For these 3 sutta, buddha taught 3 characterizes of 6 inner-āyatana depend on the enlightening-possibility of each listening-bhikkhu.

For more information, you can see naya in netti. 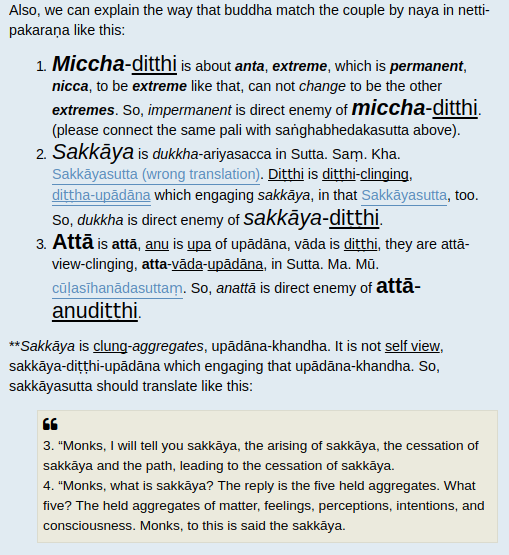 So, mostly english version, which I random checked, translated wrong as "self view (sakkāya-diṭṭhi)", but it should be just "sakkāya".

I think the commonly-accepted definition of sakkāyadiṭṭhi comes from passages like this in MN 44:

I think, in summary, that is saying that it is wrong view to identify the five aggregates with the atta -- the "self" (or, soul).

So maybe it is no surprise, and not wrong, that sakkāyadiṭṭhi is called "self-view" or "identity-view".

"But, lady, how does self-identification come about?"

"He assumes feeling to be the self...

"He assumes perception to be the self...

"He assumes (mental) fabrications to be the self...

But it might be easy to read an English translation like "self-view" or "self-identification", and assume it's talking all about the self.

Perhaps it ought to be called "a wrong view of aggregates".

1
Does Nibbana mean not self?
0
If Nirvana is unconditional then why is it not happening now?