In the temple where I am going to ordain, they often sit on their heals with toes bent forward (which I am working on) and they also sit with their legs to the side in what they call "mermaid style" which is very difficult for me. I am looking for suggestions on stretches and exercises to help me. I am 60 so these old bones and ligaments are telling me that they don't like these positions...they are very stubborn !!!

Just try little by little, Nyom Wilkes Alexander, there is no fault if not possible now. Just give not up and bear as much pain, if arising, as possible 2 to five years later it will be no problem at all and you might "laught" at western or modern claiming "it's not possible". It's likely with Dana, Sila and meditation. It may need a time, don't forget 60 years was totally in the other direction: how to serve my feelings? How to gain more of what my feeling what? Having followed Maras (defilments cries) a long it's great to hear that Nyom Wilkes Alexander is willing to go into the real battle. Best wishes and much strengh for your most blessed undertaking.

Usual positions in gatherings, especially for lay people (sitting gross legged infront of venerable ones, is very impolite. Even monks would not do on all occations, eg. if not teaching Dhamma or take their meal in public): 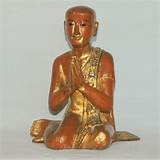 "Sit on their heals" (crouch), while the whole ball of the feet touches the ground, might be not possible since western Achilles-sinew is simply to short, never used to. (But it's also a balance matter: putting the knees outside the body and arms is needed) 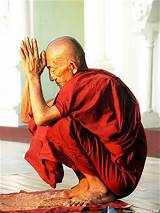 (required for asking and confession)

There is no problem usually, if "normal" kneeing like this: 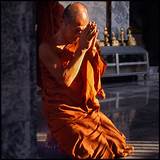 (It's not wished here to give to much encouragement and access here, nor to give advices which give release, so my person end here)

[Note: this is a gift of Dhamma and not meant for commercial use and other low exchange and trading purposes with wordly outcome.]

Not the answer you're looking for? Browse other questions tagged meditation-posture or ask your own question.