What makes someone take rebirth with non heterosexual inclinations?

I think the question is unimportant because Buddhism does not provide an answer for this question & because in Buddhism there is a path for laypeople that can be practised by both heterosexual & homosexual people. I personally know gay people who are very spiritual, very moral, very faithful to their partners & extremely compassionate. In short, there is no inherent correlation between casual sex, infidelity & homosexuality.

My first teacher taught how different types of attachments lead to certain karmic situations. According to that system, homosexuality comes from attachment to high ideals and high standards.

Different types and levels of attachment to high ideals lead to different scenarios, some lead to cancer, some to immune system problems, some to mental illness, while some end up growing into positive achievements. There all kinds of karmic scenarios, in one life or spread over multiple lives, so it's hard to be more specific, but generally speaking there's connection between attachment to high ideals and high standards, and homosexuality.

People say, and I suspect it's true, that there's nothing on that topic in the suttas.

And given that the workings of karma are difficult to explain, to predict, to know (i.e. perhaps only the Buddha is able to do it), I mistrust non-canonical opinions on that subject.

For what it's worth, here for example is a quote from a book Sexuality in Classical South Asian Buddhism by José Ignacio Cabezón: 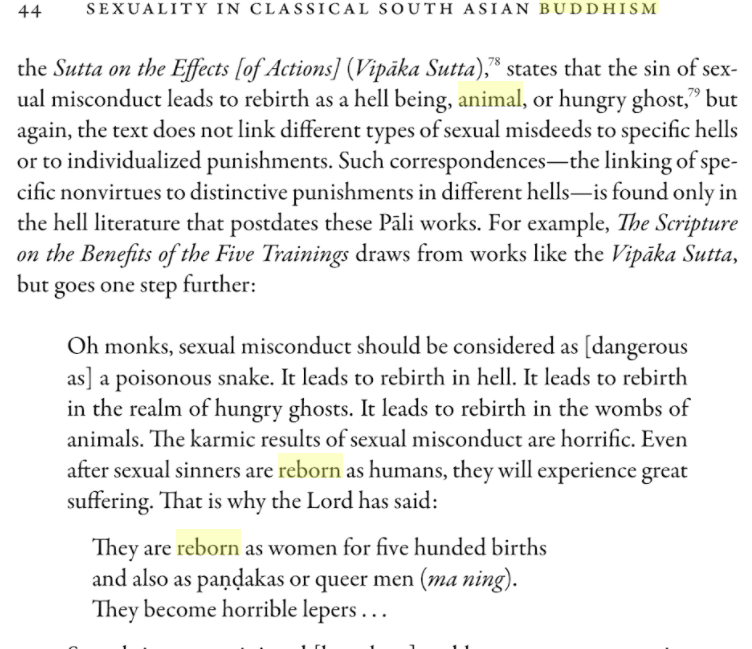 I post that as evidence that people do find (and/or have written) that kind of attitude or explanation in some scriptures.

I'm unable to identify exactly what he's quoting, though (The Scripture on the Benefits of the Five Trainings), or to find that translation elsewhere.

I looked for 'homosexual' and 'gay' in more than six hundred Dharma e-books I have, and found no more than three mentions on the topic:

Attachment is to be abandoned, whether it occurs in a heterosexual or homosexual person.

However, is it the case that gay people are born gay? Is it not that due to circumstances later on during someone’s life that he or she becomes homosexual? I myself am not sure how this happens.

And being a geshe, he studied for at least twenty years.

This being said, one of the issues of my approach here is that 'homosexual' and 'gay' are fairly recent terms. However, I could imagine contemporary translators using it in translating even traditional texts. It is shorter than "men who are attracted to men" and the like. Still, my finding or lack of it thereof is partial.

Human society as a whole has a deep and abiding attachment to the concepts of masculinity and femininity. We see it in every culture, every time period, every place and nation. Nothing creates tanhā and dukkha as quickly or effectively as thoughts about one's place in the sexual pecking order. If we rid ourselves of those attachments, then the world is no longer divided into gay people and straight people; there's just people, who love as they see fit.

There's no sense trying to suss out how the karmic world brought us to where we are. All we need to do is release ourselves from the attachments we are subject to.

Well, how we are born is due to past Kamma (among other natural laws as well).

While that is said, Buddhism goes much deeper than the physical appearance, ones sexual orientation, political preferences etc.

Buddhism is about ending suffering. Its about cultivating and purifying the mind and eventually becoming free from Samsara.

One can practice the Path no matter what ones sexual orientation is. These things are not important. What is important, is the quality of mind in an individual.

Not all gay people are alike and there is no definitive designation for gayness.

In a qualified sense, id say there can be many causes for with or without difficulty developing same sex attraction or having a strong inclination; like being another sex not too long ago, developing an unbalanced fascination with masculine or feminine faculties, perhaps looking down on feminity altogether & extolling masculinity much, or acting in femine or masculine ways much with thoughts & action for some reason.

Sutta say that one who is successful in emulating a dog or an ox is born in their company and has their sexuality.

It's a matter of conditioning and nobody remains unchanged over time.

Association is the first outwardly condition to tend toward something and it's by not associating that one does not cling toward something. With who or what one goes into relation, tends toward it, there one arrives and it might also explain why more global trends work like-a-like. The more touched by pattern and possible not knowing backwards, the more inclination toward such.

So may one take care with what and whom one goes into relation, falls step by step into debts and good to maintain always moral and shame, at least if addicted, to do prevent others from dangerous touch.

The Mahanaradakassapa-Jataka, btw., gives some view on effects of sexual missconduct, counting such as main cause of sexual stranger and other miseries.

Not the answer you're looking for? Browse other questions tagged karma sexuality or ask your own question.

0
What's the karmic cause for homosexuality?
2
Can this cause a rebirth as a homosexual?

14
Why not kill animals to hasten their rebirth?
7
If karma is objective, how come it's cause for "good" rebirth?
7
What is a pandaka?
3
Do you have to have certain pastlife karma to use a computer?
4
Complexities of karma accounting
1
Helping Others Who Still Need to Suffer due to karma
2
If someone steals my goods/harms me then is it ok to take revenge on him/her?
3
If there be no soul or transmigrating entity that takes rebirth, who or what bears or enjoys the consequences or fruits of karma?
0
What arguments are there for "karma" -- that the agent inevitably experiences the result of their actions?
0
How do Buddhists that think of karma figuratively do so about rebirth?