Should Buddhists drive a car or a motorcycle?

Could this also imply that driving a car is unwholesome and not good for a practitioner.

Would not one agree that by choosing to walk is considered kinder as it would have less chance of accidentally killing animals than driving or riding? The same could go that riding is kinder than driving. By taking these kindfull approaches, one would commit less killing and right intention, which would bring better meditation. Please be careful here, I do not imply that driving is wrong, but it can reduce peace in our mind.

When you walk you might accidentally step on ants or other small insects. Does that mean you should stop walking?

On one occasion, blind Thera Cakkhupala came to pay homage to the Buddha at the Jetavana monastery. One night, while pacing up and down in meditation, the thera accidentally stepped on some insects. In the morning, some bhikkhus visiting the thera found the dead insects. They thought ill of the thera and reported the matter to the Buddha. The Buddha asked them whether they had seen the thera killing the insects. When they answered in the negative, the Buddha said, "Just as you had not seen him killing, so also he had not seen those living insects. Besides, as the thera had already attained arahatship he could have no intention of killing and so was quite innocent."

Then the Buddha spoke in verse as follows:

All mental phenomena have mind as their forerunner; they have mind as their chief; they are mind-made. If one speaks or acts with an evil mind, 'dukkha' follows him just as the wheel follows the hoofprint of the ox that draws the cart.

Driving a car does not break the first precept unless you intentionally run over someone.

I notice that this kind of restriction might be practised by monks.

These Frequently Asked Questions include:

FAQ 12: "Are monks allowed to own and/or drive vehicles? Is this allowed by the Vinaya? If it does not go against the Vinaya, would it still be socially acceptable, given the monk's spiritual status in society?" A: There is a specific rule against bhikkhus owning vehicles. Obviously, 'motor vehicles' were not available in the Buddha's time and most travel would have been on foot. However, there was the case:

"...when the group-of-six bhikkhus went in a vehicle yoked with cows and bulls, they were criticized by the lay people. The Buddha then established a fault of Wrong-doing for a bhikkhu to travel in a vehicle; later illness was exempted from this guideline...

"Traveling in a vehicle in the Buddha's time was an extravagance. A strict application of this training in Thailand is not allowing bhikkhus to drive or own vehicles, and (officially) not to ride on motorcycles." (HS ch.17)

Bhikkhus were allowed to use ferry boats, etc. (In Thailand, bhikkhus from riverside monasteries will go on alms round by boat.)

Some (perhaps most) monks sometimes do travel in vehicles -- cars (and even airplanes) -- but, I gather, usually driven by a layperson.

I think you'll find that in general there's a difference in custom between laypeople, and ordained monks and nuns: what you said, i.e. "it would have less chance of accidentally killing animals than driving or riding", also applies to agriculture (digging in earth), for example -- which again is forbidden to monks but not to laypeople.

I note too that the reason given for not driving, in the FAQ above, is not so much kindness as to avoid being criticised by the lay people.

Different kamma vipaka have different weights. This is an area of incorrect thinking that many people have. The critical problem is that they try hard to avoid actions with relatively small kammic consequences, while unknowingly doing things that have stronger kammic consequences. Kammic consequences are the greatest for killing your mother or father, killing an Arahant, injuring a Buddha, knowingly causing schism in Sangha or having micca ditthi (wrong views). These will send you to the apayas (lower 4 realms) in an upcoming life.

You can learn more in the following posts:

So, stop worrying about the small insignificant actions and start looking at not only your bodily actions (kaya sankhara), but your speech (vaci sankhara, internal talk as well as out loud talk) which continue your predestined gathi and defiled mind (mano sankhara).

Sadhu for feeling responsible and go after thoughts of right shame!

There was once an answer on "mindful walking" and my person shared a little of practice in this regard here, but not remember where.

Once driving the bigges car in town, the thought after insects smashed on the window accures: "why not driving more slow" later "why why driving at all and not just care about the near", later "why driving at all?" later "why wearing shoes?" and since wakling toward a battle line for peace, thinking "it's not proper if wishing to encourage to peace to harm others and to wear "weapons and protections"" my person did not even took any ride since probably eight years (just saw it must be 10 already) and people asking why not are asways wondering if telling them that my person in this way is much faster than any aeroplane ever could be.

People, just having some merits in reach or access to take are not capable to calculate and the bet, aside of all the merits, is always up: no one can be faster then my person, in using vehicles, if starting at the same point, with the same conditions and counting possible debts at the destination for right calculation afterwards.

Walk! (Note heavy lyrics and not for those already on the way) And train yourself in being mindful and in letting go of greedy hypocritical ideas, step by step.

Tires are often to patch, after many thousand kilometers just step by step, there was just one accident, and this was in the near dark having fever over 40º for more than 3 weeks in remote forest area. "Devas" found my person and took care that it healed.

There is nothing more of benefit then modesty and freedom of remorse and while the Bodhisattvas rushing accross you may find lot of reason for compassion for thse killing each other again and again for their "compassioned" attachements and greed.

One is sure not only to be health at mind but also have bodily good health, not to speak of easy gaining insight and what ever powers one might be after if doing it mindful and with the right direction objected.

Be faster and smarter and let others win outwardly for as far they can see...

Ohh... btw, one my person wrote some words for those up to lighten themselves and do good:

Who is the winner in the traffic of life? 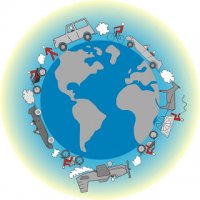 To say driving does not kill... how much do / would you cheat your self...? Follish people who step into such arguments to defend their incapabillity and greed, but certain teachers and the linegare of Jains give them food to think that they are on the right trace, yet causing neither possitive effects for themselves nor for all others in their ways and actions.

A Sense That Your Arm is Short

The Buddha's teachings are direct, straightforward, and simple, but hard for someone who's starting to practice them because his knowledge can't reach them. It's like a hole: People by the hundreds and thousands complain that the hole is deep because they can't reach to its bottom. There's hardly anybody who will say that the problem is that his arm is short.

The Buddha taught us to abandon evil of every kind. We skip over this part and go straight to making merit without abandoning evil. It's the same as saying the hole is deep. Those who say their arms are short are rare.

The Buddha and all Arahats, as well as their good and formost disciples, never took a ride and there is actually no reason to do so.

When ever you see way and reason to follow the Noble Ones, go after right resolve and right effort, since if it would not be possible, the Buddha would not have taught.

And someone blind, even by law, would not get a licence to drive... no intention incl. "put up with" or tolerate certain sure effects. Kamma by thoughts of approve and taking deliberately on account is not diverent from doing, not to speak on act-ualy doing on such account. So if actually knowing, ignoring and hypocrisy is no protection at all but called heedless or alajji and it's good to avoid people of alajji.

Some possible useful words on doing unknownly can be found here: Unwholesome done knowingly and unknowingly

Many of those self-called Bodhisatvas today, thinking by imitating the father they can be smarter as the father adviced, yet not even able to take on his outwardly standards but more eager in misinterpretating him and the ways of the Noble Ones and their follower.

Be careful and trust in regard of remorse your heart not the "brain" and the opposing group of defilements.

There is also a nice simile in a sutta about a man running, then starting to think "why do I run?"... and so on.

As long as you may have certain control of what is given to you, your feets, use them for a good.

Monks, there are these five benefits of walking up & down.1 What five?

One is fit for long journeys; one is fit for striving; one has little disease; that which is eaten, drunk, chewed, tasted, goes through proper digestion; the composure attained by walking up & down is long-lasting.

These, monks, are the five benefits of walking up & down.

Start to train your self to take care of yourself in keeping precepts where ever possible and bend away from the greed of looking around for short gains, watch out you current step. If you think to much about others welfare you might fall on your mouth, like my person did today, not taking care on that what is near and in range... it may happen fast if you forget your prime own protection letting the mind wander of, nor to speak if many might be after you waiting for moments you leave the place of work (frames of references).

Not the answer you're looking for? Browse other questions tagged five-precepts buddhist or ask your own question.

5
Is meat eating a possibility?
3
How to be mindful while doing routine activites like walking on a street known for years?

15
How concerned should Buddhists be with the actions of others?
22
How should Buddhists handle prayer requests?
13
Do all Buddhists abstain from alcohol?
31
Are all Buddhists vegetarian?
14
Are Buddhists against abortion?
22
Can or should a Buddhist defend themselves physically?
36
If a buddhist should not kill a mouse living in their home, what justification do they have to rid themselves of a parasite such tapeworms
2
How worried should one be about the lay precepts?
1
How do I prevent non-buddhists from going against fourth precept?
2
Are there any exceptions to the first precept?