The first anthropomorphic representations of the Buddha appeared centuries after his death (see this related question). Buddhist art then was "aniconic", insofar as the Buddha was only represented through symbols such as the Buddha's footprint or the Dharma wheel. In the Wikipedia article on Greco-Buddhism, there is a hint as to why this might be so:

[The] reluctance towards anthropomorphic representations of the Buddha, and the sophisticated development of aniconic symbols to avoid it (even in narrative scenes where other human figures would appear), seem to be connected to one of the Buddha’s sayings, reported in the Digha Nikaya, that discouraged representations of himself after the extinction of his body.

This assertion isn't, however, accompanied by a reference to the relevant portion of the Digha Nikaya, and it is contradicted in Donald Lopez's latest book, From Stone to Flesh: A Short History of the Buddha (University of Chicago Press, 2013):

[N]o proscriptions against making images of the Buddha have been located in what scholars would regard as an early Buddhist text, nor have any prescriptions for his representation been found.

Is there actual textual basis for the claim that the Buddha discouraged antropomorphic representations of himself (in the Digha Nikaya or other early Buddhist texts)?

A direct quote from the Digha Nikaya that explicitly expresses a prohibition or even a discouragement concerning his antropomorphic representations has not been found yet, as far as I know.

In Religions of the Silk Road (Munshiram Manoharlal Publishers, 1996), Yuvraj Krishan maintains that the aniconic period is due to a Vedic heritage: Vedism was aniconic because it considered the highest gods as ultimately transcendent and formless. His contention is that when Buddhism was in its infancy, those who were faithful to the growing tradition were careful to act within to the Vedic tradition to avoid any normative displacement. So it should not surprise us that the earliest representational art appears at the geographical fringes of the Indian subcontinent (Sri Lanka and Gandhara). The earliest source for this thesis that I know is John C. Huntington's 1977 paper titled "The origin of the Buddha image".

Although there seems to be no known explicit doctrinal injunctions against the representation of the Buddha in anthropomorphic form, there is an oblique statement in the Vinaya of the Sarvastivadins (first called attention to by Arthur Waley) which may be interpreted as a prohibition and consists the only textual source I have found to this effect. In this passage, which deals with the decoration of monasteries, Anathapindika asks:

World-honoured one, if images of yours are not allowed to be made, pray may we not at least make images of Bodhisattvas in attendance upon you? (apud Waley, 1931/2)

You may want to refer to this sutta from Pali Canon

Buddha said to him, "The sight of my foul body is useless; he who sees the Dhamma, he it is that seeth me"

Idols and Suptas are representing the teaching of Buddha, the Dhamma. 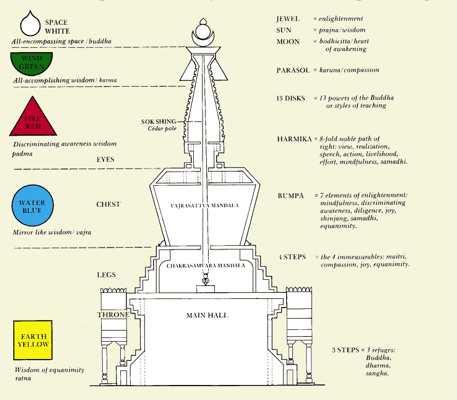 "The disciplines of austerity and contemplation Gautama had taught were now increasingly confined to a minority of orthodox .., the followers of Mahayana winning conversions among the masses. One sign of this was the proliferation in the first and second centuries AD of statues and representations of the Buddha, a practice hitherto restrained by the Buddha's prohibition of idol-worship." (Roberts 1995: 417)

Not so explicite, but tendency to encouragements on reminders... image of him?

Ven. Ananda Thera once desired to keep a reminder of the Buddha at the monastery, while the Lord Buddha went into the lands, for encouragement of all in his absence, and asked the Buddha in relation of this. While the Buddha remarked that certain memorials of a Buddha while alive are not proper, he allowed to plant a Bodhi-tree one that occation.

"Not proper when alive..." does easy allow the thought that an image (after death) as encouragement and to increase faith, is approved by the Buddha. Now what kinds are there?

..."This monastery, Sir, is left unprovided while the Tathāgata goes on pilgrimage, and there is no place for the people to do reverence by offering fragrant wreaths and garlands. Will you be so kind, Sir, as to tell the Tathāgata of this matter, and learn from him whether or no it is possible to find a place for this purpose." The other, nothing loth, did so, asking, "How many shrines are there?" —"Three, Ānanda." —"Which are they?" —"Shrines for a relic of the body, a relic of use or wear, a relic of memorial [202]" —"Can a shrine be made, Sir, during your life?" —"No, Ānanda, not a body-shrine; that kind is made when a Buddha enters Nirvāna. A shrine of memorial is improper because the connection depends on the imagination only.(?) But the great bo-tree used by the Buddhas is fit for a shrine, be they alive or be they dead." —"Sir, while you are away on pilgrimage the great monastery of Jetavana °° is unprotected, and the people have no place where they can show their reverence. Shall I plant a seed of the great bo-tree before the gateway of Jetavana?" —"By all means so do, Ānanda, and that shall be as it were an abiding place for me."...

202: See Hardy, Eastern Monachism, 216 f. The last class is said to be images of the Buddha. (similar in German translations)

My person also remembers, that in regard of not allowed to carry and draw pictures, images of humans, for monks, the commentary, at least, report that aside of samvega increasing, images of the Buddha are allowed.

The often ignored commentary, "historical" reports at least, of serious source, whould surely give much detail. There are even guidlines how and where to put (direction...).

Shrine should be understood as memorial image.

I revere every stupa established in every place, every Relic of the Buddha's body, every Great Bodhi tree, every Buddha image that is an object of veneration.

The tendencies in Vinaya are generally strong against subha, but allow asuhba images. See also general comments on Buddhist Art here. The strong attachment to form, by humans, would also explain the Dhammic reason behind the rules.

Further additions, edits and discussion on it can be found here: [Q&A] Buddha-images are allowed by the Buddha (at least by monks)?, in the Open-Vihara.

Early artists did not make statues of Buddha so as not to make mistakes in representing the features and characteristics of the Buddha.

The statues came later as a tool of worship to develop faith in the Buddha.

There is not encouragement or discouragement of this from the Buddha or in the ancient texts.

8
Theravada Buddhism and Art
6
Why did physical representations of the Buddha only start to appear a few centuries after his death?
-2
Didn't Buddha Say The Biggest Fault Of Humanity Was Idol Worship