How can the term “spirit” be translated into Buddhist doctrine?

How can the term "spirit" be translated into Buddhist doctrine? If I may just copy paste the definition: 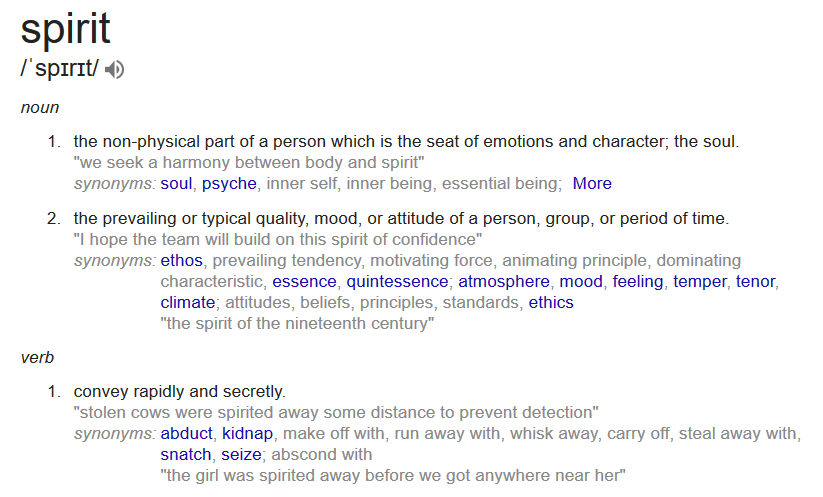 Moreover, could be mean anything unconditioned, permanent, or in some way separate from the rest of 'us'? The tags are clues, but I'm not being facetious.

It is citta (mind), which have cetasika (citta+nika;mind factors), such as feeling, emotions, etc. See more information in cittanupassanasatipatthana in mahasatipatthanasutta.

Abhidhamma describe this topic as tons.

Trying to translate "the seat of emotions", and looking at Ayatana, I guess the answer might be "mana" or mind -- because the "mind" is to "mental objects" what the "eye" is to "visible objects" -- in that way the "mind" might be called the "seat" of "mental objects" (which I think include "emotions").

Or the answer might be "citta" (according to this extract from the definition of mano):

As regards the relation of manas to citta, it may be stated that citta is more substantial (as indicated by translation “heart”), more elemental as the seat of emotion, whereas manas is the finer element, a subtler feeling or thinking as such.

Asking for a translation of "the soul" though, into Buddhist terminology, is difficult: because in Christianity the "soul" (or "spirit") is understood to be eternal, whereas Buddhism denies there is such a thing. I think that the word for the "permanent soul" denied by Buddhism is atta (Pali) or atman (Sanskrit) -- which I think that just means "self". In Hinduism that word is imbued with extra meaning ("the Self"), in Buddhism it's used as a simple, conventional or grammatical reflexive pronoun.

Instead of atta another possibility is "satta".

a living being, creature, a sentient & rational being, a person

A disadvantage of this translation is that "a being" isn't exclusively non-physical -- also, that in suttas like Vajira Sutta (SN 5.10) the view that there even is "a being" is condemned ... instead there are only "the aggregates".

So the "aggregates" ("khandhas") might be a good translation -- except that there are four non-form aggregates where perhaps you were looking for a single word -- and except that I'm not sure that "perception" ("sanna") for example is the "seat of emotion", and I think instead it's the various transient emotions themselves (perhaps without positing the existence of "a seat").

Incidentally the etymological origin of the word "spirit" comes from a Latin word related to "breath" or "breathing" -- that's a bit of an interesting connection, given the Buddhist practice of "watching the breath" ("anapanasati"), partly to understand how breath is connected to emotion. It's said that a meditator 'should watch the breath, in the same way that a hunter might watch an animal's lair' ... i.e. knowing that sooner or later the animal will return to its lair. In that way maybe "the breath" might be regarded as "the seat" -- I'm not sure though whether you'd count that (the breath) as "physical" or "non-physical".

With some reservation, I think the term 'mind/Cittavagga' will fit for what you looking.

> 37. Dwelling in the cave (of the heart), the mind, without form, wanders far and alone. Those who subdue this mind are liberated from the bonds of Mara.

If it is a phenomenon, then it is either:

One could say there is a nonphysical part of a person, the continuum of consciousnesses (that part is obviously not the person but a basis of designation).

As Andrei suggests we might see the alaya-vijnana such as posited by Yogacara (mind-basis-of-all or store-consciousness) as the seat of the seeds that manifest as (1) apprehending consciousnesses and (2) apprehended object.

This is not posited by other schools, though. From a Prasangika viewpoint, qualifying the mind of "seat of emotions", regarding it as a container or a field, would be strange. For instance, fear itself is a mind that is not "grounded" on any other factor (although it depends on them), from this point of view.

Your definition of spirit is "The non-physical part of a person which is the seat of emotions and character."

The "spirit" from your definition is therefore the "self" (atta). But in Buddhism, there is no standalone absolute or permanent entity called self or spirit or soul. It exists, but it arises out of the inter-working of the five aggregates.

According to what I have heard, Buddha has explained four types of lives...

Therefore, the spirit comes under the fourth group.

10
What is the difference between Vijñāna, Manas and Citta?