What do different schools of Buddhism say about Mara

Does the concept of "Mara Devaputta" (The being called Mara) exist in all schools of Buddhism?

What is mentioned about that concept?

Mara , according to the specific Buddhist and Hindu Cosmology, is the leader of the heaven above Sakra, prince of the Devas (see The Thirty-one Planes of Existence).

According to Wikipedia's Mara (demon) article:

In Mahayana Buddhism. There are traditionally these four types of Mara In traditional Buddhism, four metaphorical forms of "māra" are given:

This Devaputra Mara is, according to Buddhists, a real sentient being. He is destined to become a Pratyeka Buddha. His followers might not be so fortunate. 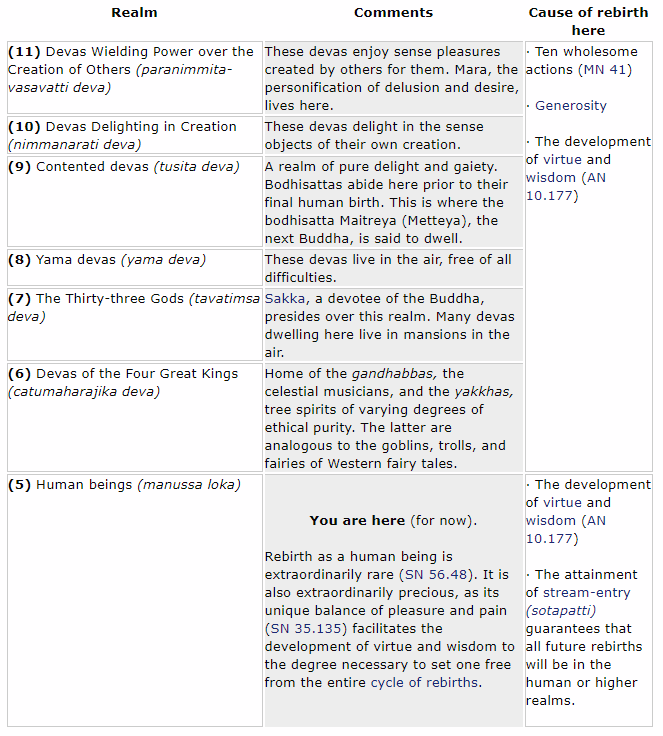 The above image quoted from The Thirty-one Planes of Existence. Note especially:

You should consider reading S. Bachelor's book, Living with the Devil, where he explains how different Buddhist schools define Mara.

There is a short interview with the author: Living With The Devil -- A Buddhist take on good and evil.

In fact, Batchelor considers "Mara" - the seductive allure of doctrine that offer the false consolation of an explanation of the meaning of life and "I". There is even an opera about Mara (Mara the Opera).

Batchelor is clear. "Buddha and Mara are figurative ways of portraying a fundamental opposition within human natures." The idea that Mara "comes down to earth, has a little chat with the Buddha, then goes off again" is for children. Mara would not be a 'being'.

As Mara describes a natural function of the mind it will appear in all schools of Buddhism and all doctrines of the Unity of Self. It just won't always be called Mara. Jesus met Mara in the desert under a different name and awarded him the same treatment.

Mara is said to have sent dancing girls to distract the Buddha from his purpose and he simply turns them into cherry blossom. I feel this is a useful story to remember for the ease with which the Buddha, like Jesus, dispatches Mara. Once the ego and the distinct self is dealt with Mara becomes toothless because there is nobody to tempt.

This is my view and as such may be incorrect.

"Mara" is the enemy of enlightenment. "Mara" can be so cunning that this morning a "Mara" visited this forum disguised with the user-name "Nibbana". This shows how sneaky & cunning Mara is. This Mara tried to stop the enlightenment my Holy Guru Volkov transmitted today.

In the Pali suttas, "Mara" is found in many places, such as:

In summary, Mara believes the "birth" ("jati") of "a being" ("satta") is a physical organism emerging from a physical womb rather than merely the arising of a "view", as described in SN 5.10:

Why now do you assume 'a being'? Mara, have you grasped a view? This is a heap of sheer constructions: Here no being is found.

Just as, with an assemblage of parts, The word 'chariot' is used, So, when the aggregates are present, There's the convention 'a being.'

Not the answer you're looking for? Browse other questions tagged mara or ask your own question.

13
Do Buddhism and Atheism contradict each other?
15
How compatible are the beliefs of atheists and Buddhism?
12
What/Who is 'Mara' in Buddhism?
8
Is going for refuge central to all Buddhist traditions?

5
Do modern-day Buddhists take "Mara The Evil One" literally?
3
Did Mara win over Buddha?
4
Laying down for the benefit of all sentient beings
4
How does one become a "Māra"?
1
Why is nirvana not mara?
3
Is society the follower of Mara?
1
Can bodhisatta reborn as mara
1
What is the meaning of the Datthabba Sutta?