How this quote by Mahathma Ghandi is compatable with non-violence teaching of Buddhism?

Here is the famous quote by Mahathma Ghani the great leader from India;

"It is better to be violent, if there is violence in our hearts, than to put on the cloak of non-violence to cover impotence. Violence is any day preferable to impotence. There is hope for a violent man to become non-violent. There is no such hope for the impotent."

My simple question is; Is this acceptable? How can it be compatible with non-violence teaching of Buddhism?

It's a common missinterpretation that Ghandi-like approaches, Mahātmā (Maha Atma, "great Ego, great selfishness"), of kind of passive aggressivism goes allong with the good teachings of the Buddha.

For a large he used affliction to "force" people, like with his well known extortion by hunger strike. It's merely unattentive to put exortions and alike under non-violent. Non-violence has it's root in the mind, has being impotent (for becoming and desire) as case. When one acts with big desire, big potence, yet cover one self with the cloak of non-violence one might become the hero of fools, playing with their affections.

Another outwardly indication, as a result if one has rightly developed metta one might prove:

One sleeps easily, wakes easily, dreams no evil dreams. One is dear to human beings, dear to non-human beings. The devas protect one. Neither fire, poison, nor weapons can touch one. One's mind gains concentration quickly. One's complexion is bright. One dies unconfused and — if penetrating no higher — is headed for the Brahma worlds.

Those common views, that "non-violent" aggression and actions of politic and "manipulation", yet most for an opinion, one side, and in opposition, are merely a notion of secular approaches and in Mahayana spheres often accepted "doing evil for a good", which is common tolerated by normal people, given the titel "hero" to one taking side.

There are NO of such "heros" who had not caused a mass on suffering, and if we think on what Maha-Atmas approach caused on wars and death in the following, to what has been giving rise to ripe, it's merely the observation of blind to gratify such as good.

Virtue which is not based on right view can not be real virtue but falls for the most into the frame of just another hypocrisy.

So in this regard it's possible better (althought aggressive as well) to listen more on such as Oshos statements on heros, like Ghandi (not, it's merely vulgar speech or better provoking)

As for the Buddha and his Dhamma, uprooting the flag, the potence, as well as giving up holding to being, becoming and birth (and its effect death) clearly contradicts not only the words but also the conduct of what ever might cover himself with non-violence, yet still on a fight and after win in the world and outwardly.

In somehow it seems in this way merely like a selfreflection, this quote, by him.

Opposing ones leader, father and mother, contemplatives, disrespect toward them, even if covert in "non-violence", leads to violence and to the other extrem on the same coin.

It shows the four kind of tools to win fools in politic in detail:

and the notions in levels of having become really non-violent, with the attributs of the Arahat at last:

"And how does a monk not burn? There is the case where a monk's conceit of 'I am' is abandoned, its root destroyed, made like a palmyra stump, deprived of the conditions of development, not destined for future arising. This is how a monk doesn't burn."

To be outardly potent and give birth and becoming, is not the noble intent seen within the Noble Ones, but to uproot and destry the Linga at its root, cut it of, for oneself.

Jesus-like self-sacrify, martyr of all kind, the wise and the Dhamma does not see as prais worthy but merely as "impotence" to be winner over one self and have failed to even trace the cause of suffering in ones own heart.

Understanding the quote in this way in regard of potence, than it fits to the Dhamma, for one who ignores the real enemy within one self, fighting outwardly, has put a cloak of ignorance, with favoring colors above ones ability (potence) to get a real hero.

"It is better to accept anatta, if there is mahatma in our hearts, than to put on the cloak of anatta to cover incapacity (to uproot it). Mahatma is any day preferable to incapacity. There is hope for a Mahatma man to realice Anatta. There is no such hope for those incapable to see, those without faith in the path, those not after cutting of Mahatma."

[Note: This is a gift of Dhamma, not meant for commercial use or other lower wordily gains by ways of exchange or trade]

I think Buddhism teaches that we are responsible for our actions, our reactions, perhaps our current situation too, and our future, and that we should (and can) behave ourselves accordingly.

So thoughts like, "I'm angry, I can't do anything about it, and that's his fault" are kind of anti-Buddhist, and I assume is what the Mahathma was talking about in that quote about "impotence".

If a quote sounds strange I like to read it in context. Unfortunately I can't find the context within which the above quote was written. It is recorded in a book of quotes, Gandhi on Non-Violence: 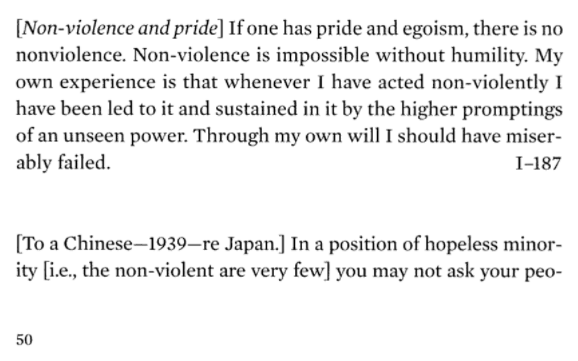 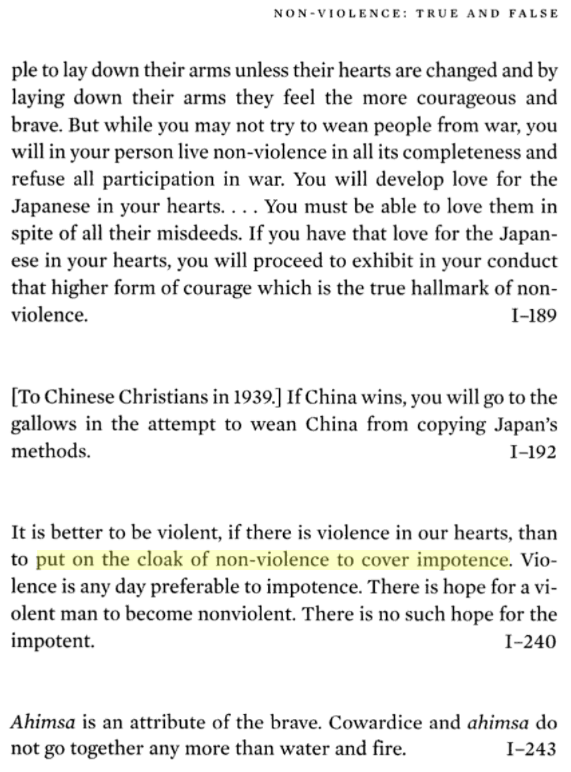 Perhaps what he means is that a violent man whose violence is held in check by fear of reprisal has the will to be violent but lacks the means - and that he therefore shouldn't hypocritically claim to be a man of peace. He is not. He is a man of limited means. And it is easier to cure his violence than to give him the means he desires to exercise it.

I think Buddha would agree. Frustrated desire is not the opposite of desire.

All mental phenomena are preceded by mind,
Mind is their master, they are produced by mind.
If somebody speaks or acts
With a corrupted mind,
Hence suffering follows him,
Like the wheel the foot of the bearing animal.

A monarch or ruler should not be violent, but he should not be "impotent" either. He should be competent enough to protect and take care of his people.

Gandhi was in his own way, a "wheel-turning monarch" who brought independence to his people and founded a nation, with little or no violence.

The following comes from DN 26:

But what, sire, is this Ariyan (noble) duty of a Wheel-turning Monarch?

This, dear son, that thou, leaning on the Norm [the Law of truth and righteousness] honouring, respecting and revering it, doing homage to it, hallowing it, being thyself a Norm-banner, a Norm-signal, having the Norm as thy master, shouldst provide the right watch, ward, and protection for thine own folk, for the army, for the nobles, for vassals, for brahmins, and householders, for town and country dwellers, for the religious world, and for beasts and birds.

Throughout thy kingdom let no wrongdoing prevail.

Not the answer you're looking for? Browse other questions tagged teaching or ask your own question.

3
Does this statement by Buddhadasa Bhikkhu conflict with traditional mettā meditation?