If buddha never got angry, why do so many buddhist teachers say anger is inescapable?

Some buddhist teachers say anger is inescapable, or even necessary and healthy, are they not enlightened ?

Because teachers, or even if they are arahats, are not Buddha. They often err or have some imperfection in their teachings. They may have destroyed all or some of the fetters but they are not perfect as Buddha in Dhamma (both in seeing and how to articulate it). In Ani Sutta, Buddha said not to lend ear to new teachings. I have not seen "anger is inescapable, or even necessary and healthy" in any sutta that could be credited to Buddha's original teachings. As for myself, I disregard it.

PS. I certainly not to be disrespectful to your teachers. They may be imperfect in their teachings but it is still a good idea to hangout with people who are virtuous in their precepts. IMO.

PS2. wanting to be near, approach those with virtuous actions, keeping precepts is a sign of Saddha.

Why do so many buddhist teachers say anger is inescapable?

There are a total of 10 fetters that has to be broken in order to attain Nibbana. Anger/ill-will is the 5th fetter.

The destruction of those fetters comes in stages;

When a fetter has been broken it does not come back. It is done away with for good. It is permanently destroyed, meaning that one has "escaped" from it.

As seen in the illustration below, the Arahant is free from the 5 lower fetters and the 5 higher fetters.

The Non-returner is also free from anger/ill-will.

Only the Stream-enterer and Once-returner has not yet broken the fetter of ill-will.

That of course goes for Worldlings as well, i.e. beings that have not yet reached any stages of Enlightenment. 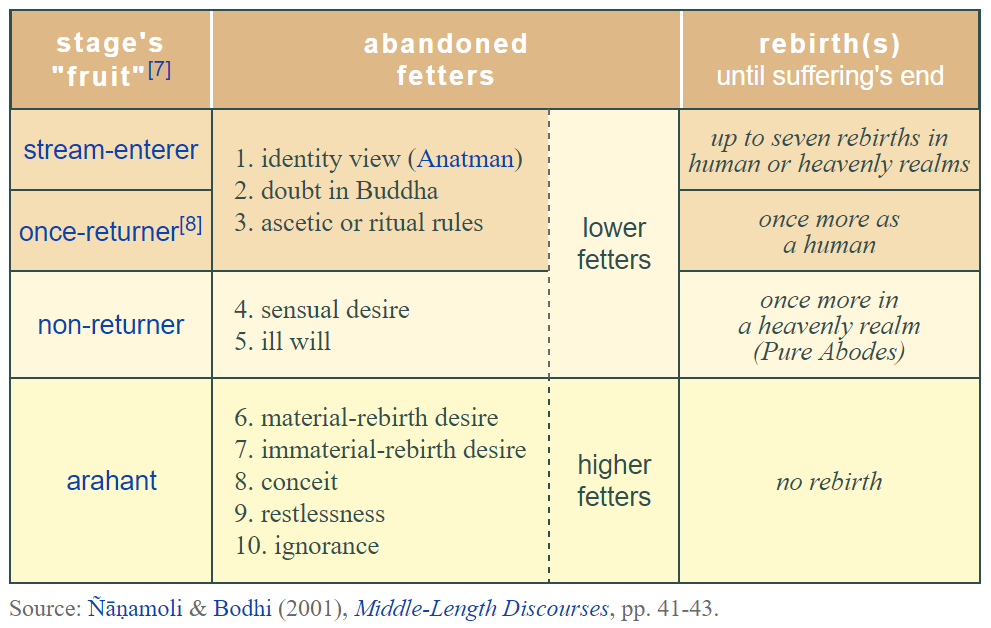 Not the answer you're looking for? Browse other questions tagged fetters or ask your own question.

2
Silabatta Parāmāsa
5
Sakkāya-Ditthi and Self-View
4
In which ways do anagamis still experience ignorance?
2
Is it demerit to give donations to sick non-Buddhists?
0
Understanding Rūparāgo and Arūparāgo
2
What is the "sensual desire" fetter?
2
What does "becoming" mean in the phrase "the 10 fetters of becoming"?
2
Confusion about Stream Entry