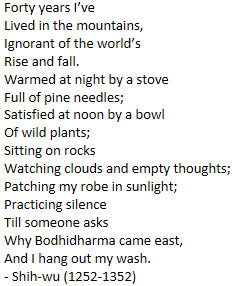 ... I think of how long-lived such mountain monks tended to be on such a minimal diet (and of course whatever spiritual cultivation they gained) and focused they were on their own cultivation. Are there any records of diets of these mountain monks? I know many of them practiced Taoist teachings in addition to core Buddhist teachings, like the many monks that wrote the poems on Cold Mountain.

They were almost always brought alms food, generally in the form of rice and other cultural staples. They'd also go to the marketplace to beg. Han Shan (i.e. Cold Mountain himself) and his buddy Shide would also mooch off some of the local monasteries when they got especially peckish - much to annoyance of some of the abbots who often gave Han Shan an ultimatum to formally ordain at their temple if he wanted to keep his meal ticket. Check out Bill Porter's book Road to Heaven. It profiles a number of contemporary Chinese recluses and charts their place in a lineage that has remained relatively consistent over at least a thousand years. There's almost always a tension between their ethereal life in the mountains and the world of red dust that provided their meals.

Perhaps this answer will be too personal and seem unrelated to Buddhism, and my answers are a bit simple-minded, but...

I can tell you that the diets that do not add to your karma are those that take from that which gives itself freely.

That means: grains, fruits, and nuts. Water, air, and sunlight, of course, are free as well. Anything else and you can't be sure that you are not taking from the path of those organisms and the contribution that they may contribute.

It should be said, that if you take from fruits and nuts and grains, you give back by planting their seeds, too. With nuts, perhaps 10% of your harvest should go to planting new trees.

This is how I see living the dharma.

That's really quite a nice poem and not bad a translation... if I could find the original. Some effort.

This is interesting. I read about Ven. Xūyún (虛雲和尚 1840-1959CE), there were years he lived and ate only taros in his retreat. He planted once every year, then dug out one each day and ate; if that's bad that day, he didn't eat. It reported that a time he entered into Dhyana, later he emerged found his taro in the bowl got moldy, until then he realized he's in the Dhyana for months. It was until he broken a teacup, that moment he got enlightened - Míng xīn jiàn xìng (明心見性). Another record reported that there were many people died (war or famine?) in late Qing during reign of Dowager Cíxǐ, she begged Xūyún to do something so that the piled corpses wouldn't cause epidemic. He set the alter and abiding in Dharma for 7 days, then it snowed in the high summer of June, the snow covered the bodies. He was the most respectable monk in modern time, imo.

Then there's the Tibetan monk Milarepa (1052-1135CE), he ate only the nettle leaves when dwelling in the cave.

There's another monk he ate only fruit all his life. I'm in favour of this practice. The only food that could be the fair exchange and non-violent to eat is fruit. The plants made them to be eaten so that they got their seeds propagated. However, there comes in GMO, and seedless oranges, grapes...

And of course Prince Siddhartha was the most outstanding recluse living on one sesame each day for six years before enlightened to be the Buddha.

Rddhi power is an inevitable condition when one can abide in 3rd Dhyana truly, even the 2nd. Usually a recluse can have greatest achievement in this respectful search. Any endeavour one invested all his effort and life, fortune will smile back with the reward. It's a lost when one dedicated all life into monk-hood but lives just like an ordinary, even with bad health, what's the benefit? For oneself or the world? Can these monks teach the truth? They don't even have their "third-vision/ divine-eyes" opened, how could they know what is true? Except maybe parroting the Sutra/Sutta phrases, or pretending venerable, or being dogmatic scorning the world, or chorusing with the scholars being one of the "world famous" scholastic monk with essays/books cosplaying Buddha-Dhamma cited in equally "world famous" academic publications? The Dharma is not on the paper; none in the oral memorizing. The Buddha never condemned Rddhi power, but condemned those faking it, or showing off it or using for bad deed.

It is not uncommon to practice abstain from eating in Chinese tradition. Bìgǔ (辟谷) is very easy to achieve, means not eating at all, maybe only water, or slice of fruit. I knew a Dharma sister of 70+ she did it for 100+ days, only drinking a bit of mineral water. She had health problem with her excess weight. After she was much healthier, and lost those unwanted extras.

The traditional Chinese Taoist has this practice: Bìgǔ fúqì (辟谷服氣), means abstain from eating but consuming the Qi. It's very advance. However, the Buddhist has the ultimate. It is in the Surangama Sutra that the Buddha said eating what grown from the earth your feet can't leave the earth... Vimalakirti Sutra, in the Fragrant Pureland (香積佛國) food is scent, so the Dharma also transmitted in scent, no language used. In Agama Sutra it said the earliest Beings (ancestors of humans) falling down from the Realm of Sound Brilliance were living on bliss only (喜樂為食)... But these are all too advance for conventional practitioners to even contemplate, not to mention many of those lesser ones enjoy dental-drilling the higher teaching of the Buddha, defaming also disparaging the authentic Sutras but having low taste in favour of the minor inaccurate lineage. They don't have the capacity of mind nor deserve to hear.

This doesn't answer your question but -- even if there are (written) records I guess it may be difficult to identify plants from written records: for example even if they record the common (local) name of the plant and where to find it, that historical information may not be useful in modern times.

So instead of historical Buddhist records, you might be interested modern scientific studies like (to pick one at random) Wild food plants and wild edible fungi in two valleys of the Qinling Mountains (Shaanxi, central China).

There are many ways how recluses of other sects might dwell isolated, how ever, the Buddha did not want his disciples to do such, and such rules not to cook, not to store food, not to pick up fruits from trees, not to damage plant live, not to live in improper dependency of some... do not allow such a kind of dwelling: isolated.

The poem does btw. not indicate such, since the teller used obiviously an alms bowl. Une finds very similar poems in the Theragatha. Being better, currently doing, such a dweller, as well as suggestions in the records: one should not stay much more fare then 2 or 3 km from settlements, longer distances for alms round are neither conductive for the practice nor for health.

There are people, recluses, even Monks ordained proper, who live isolated, have either relation to certain lay supporter, or store food, cook for themselves, even walk for gathering fruits, roots, mushrooms... but all that (mostly even accept money and use it, to manage their needs) is neither Buddhas wish nor in accordiance with the Dhamma-Vinaya, often connected with heavy offences.

From the view of personal benefit, one is reminded that one depends on others, every day and one is independent at the same time, not engaging in any kind of trade or unskilfull actions.

Furthermore, if monks would live isolated "independend" people would not come in touch, never be reminded on the fourth heavenly messenger, hardly ever hear teachings. Furthermore the tradition would be very fast extinguished. Not to speak that the world would be void to the great field of merits.

So if one seeks for the Dhamma and way of the Buddha, really no need to seach for remote recluses.

From experience, recluse on montains, living other the rightly, certain "independend, are for the most brahmanic colored, often seek to develop iddhis (special) powers, or simply make themselves more interesting for certain gains, and yes, there are also the angry ones, those who bear aversion torward other people an sociaty in an unhealthy way. For all this cases, at least one, not secure, is always very in need of correcting admirable friends, the Buddha did not encouraged to dwell in forests and isolated.

Not the answer you're looking for? Browse other questions tagged monk or ask your own question.

3
What are the benefits of solitary practice?

3
Is a monk allowed to receive money?
4
How to know who is a good monk?
6
How does a monk address parents and relatives?
1
Buddhist Monk - Travel by air
3
Sign of respect to Sr Monk?
9
Buddhist monk education level
2
Can one be a part-time monk?
0
Why do Buddhism monk hits people in the head?
4
can I become a monk with schizophrenia?
3
How to disconnect family life & become monk?