Wise reflection on Dhamma with momentary concentration, without meditation

In the essay entitled "The Five Mental Hindrances and Their Conquest" by Ven. Nyanaponika, he wrote:

This widespread harmful influence of the five hindrances shows the urgent necessity of breaking down their power by constant effort. One should not believe it sufficient to turn one's attention to the hindrances only at the moment when one sits down for meditation. Such last-minute effort in suppressing the hindrances will rarely be successful unless helped by previous endeavor during one's ordinary life.

The above excerpt and this video featuring a talk by Ven. Dhammavuddho, implies that the Five Hindrances (panca nivaranani) not just affect meditation. They could also habitually obsess one's mind and prevent progress even outside meditation. I also see that they are among the ten fetters (samyojana).

What is momentary concentration (khanikasamadhi)? Is it the kind of concentration that was found in those listening attentively to the Buddha who attained stream entry at the end of the discourse (although they did not have any meditation experience)?

I have not studied much about khanikasamadhi apart from one book which states it is not a genuine samadhi, which I would agree with. 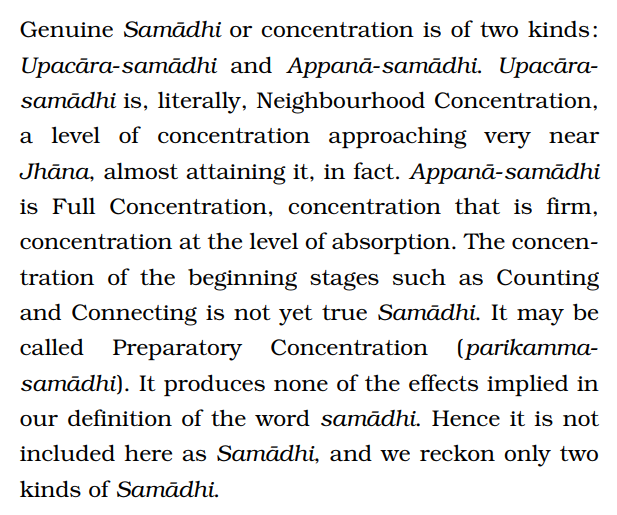 My research finds the idea about three kinds of samadhi are those of Buddhaghosa; found in his Visuddhimagga & commentary on the DN (Sumangala-vilasini); rather than of the Buddha. I do not see the point of trying to understand the teachings of the Buddha by taking refuge in questionable teachers, such as Buddhaghosa & his disciples, such as Nyanaponika.

Khanikasamadhi sounds like a worldly concentration, such as when self or ego tries to focus on a meditation object. To experience stream-entry, I think neighbourhood/access concentration is required; which is probably why it is called "access" concentration.

Personally, I would disagree with Nyanaponika's ideas. If the concentration was not impaired by hindrances, why would it be called "momentary" concentration?

What is wise reflection (yoniso manasikara)? Is this the kind of reflection that was found in those listening attentively to the Buddha who attained stream entry at the end of the discourse (although they did not have any meditation experience)? This is implied in Ven. Dhammavuddho's talk.

No. Wise reflection means to think or ponder. It is wisdom faculty rather than concentration faculty. Stream-entry obviously occurs via direct seeing or vipassana rather than via wise refection.

Imo, there is no relationship. Wise reflection can cut through hindrances and can lead directly to be able to develop access concentration; as is described in MN 19. Where as momentary concentration is the clumsy efforts of the puthujjana that meditates with craving & ego.

*What is the relationship between mindfulness (sati) and the other two - wise reflection (yoniso manasikara) and momentary concentration (khanikasamadhi)?

Mindfulness remembers to engage wise reflection. Where as momentary concentration is generally the result of wrong mindfulness, i.e., meditating with craving & ego.

Do these factors make it possible for one to understand the Dhamma and attain stream entry without meditation, simply by wisely reflecting on the Dhamma with momentary concentration (which could only occur when the five hindrances are not present)? This is implied in Ven. Dhammavuddho's talk.*

Stream-entry must taste liberation, which is why stream-entry extinguishes doubt about the teachings. Therefore, wise reflection alone probably cannot lead to stream-entry because the taste of liberation includes the absence of thinking.

The Buddha taught the five hindrances cannot be removed when hearing the wrong teachings given by unworthy people (AN 10.61). These matters cannot be understood by taking monks seriously who cannot speak one sentence without say "uh", "ha", many times in one sentence. A monk with right mindfulness is at least aware of the quality of his speech when he talks.

2.: "overcome the five hindrances" is prereqisite for samma samadhi. "How does one cultivate momentary concentration", it's a product of the prerequisites, a kammic effect.

4.+ 5.: attention, the view direction; sati, keeping this and sequence in mind; samadhi the product, effect. If there is the "disturbance" of thinking in between, it will be not "direct perceived" but stays to certain amount a blurred perception.

[Note: This is a gift of Dhamma, and not meant for trade for worlds possible gainings]

Not the answer you're looking for? Browse other questions tagged personal-practice five-hindrances right-concentration or ask your own question.

16
Can you attain stream entry without meditation?

4
Is Practicing Tantric/Wrathful Meditation Dangerous Without a Guru?
16
Can you attain stream entry without meditation?
6
Working with hallucinogenic images during meditation
7
Working with cycles in meditation
3
problems with meditation in the morning
5
Should I decrease the amount of time I practice concentration meditation?
1
How to deal with post meditation frustration?
3
How does Emotional Intelligence go along with Dhamma practice?
3
Concentration with no object?