What does “safeguard cognitive process” mean?

The term seems to be defined in the referenced answer itself:

It helps for you to know that your mind cannot understand something unless it makes sense to you and your mind cannot do something unless it makes sense to you. You have a very sophisticated intelligent function or mental process that constantly makes sure that what you think, do, or decide actually makes sense. This process can be viewed as a safeguard against errors in learning or against errors in the application of what you have learned.

It's also mentioned in one of the OP's books (How Mindfulness Meditation Works: A Modern Buddhist View): 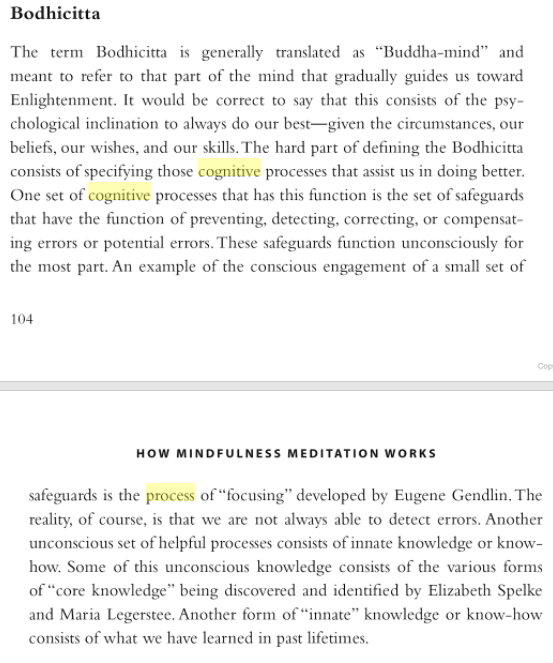 Bodhicitta is, I think, mostly a Mahayana term.

Amazon's About the Author says,

Ronald Cowen has practiced mindfulness meditation for 50 years under the direction of the late Venerable Namgyal Rinpoche.

Namgyal Rinpoche is mentioned on Wikipedia (which may concur with Dhammadhatu's assessment: that the teaching may be expressed in terms related to Western psychology).

What was written in the answer was not Buddhist mindfulness but sounded like Western self-administered psychotherapy.

What the answer appeared to say is when you sit in meditation regularly, whatever emotional intelligence & wisdom your mind has developed will be safeguarded.

For example, you have an argument with a friend. Then you sit in meditation and, because of the stress & regret arising in your mind when meditating, the emotional intelligence arises: "It is bad that I argued with my friend. I should apologise to them". This is an example of safeguarding whatever emotional intelligence & wisdom the mind has developed.

Similarly, if the mind views any conditioned thing as permanent, satisfactory & self, mindfulness remembers these are wrong views and applies right view to end those wrong views.

Buddhist right mindfulness is described in the Pali suttas & is different to the answer in that book.

One is mindful to abandon wrong view & to enter & remain in right view: This is one's right mindfulness.

Not the answer you're looking for? Browse other questions tagged meditation or ask your own question.

13
What could I say to someone when they ask me “why do you meditate?”
4
Momentum Within Meditation
2
Technique for Concentrative Meditation
2
What does Buddhism teach about healing others through the mind
3
What is 'letting go' and 'detachment' actually?
0
Critique of interview with secular Buddhist author of “Why Buddhism is True”
2
Does skillful means include meditation?
0
Understanding Saṅkhāra in dependent origination as *choices* of body, speech and mind?
1
How does an ordinary person adopt Right View concerning the the hardships of the Buddha's earthly life?
1
Sequece of Meditation and Side Effects