Is causation (hetu) in SN 22.82 different to conditions (paccaya) in Dependent Origination?

The four great elements, bhikkhu, are the cause (hetu) and condition (paccayo) for the manifestation (paññāpanāya) of the form (rupa) aggregate.

Contact is the cause and condition for the manifestation of the feeling aggregate.

Contact is the cause and condition for the manifestation of the perception aggregate.

Contact is the cause and condition for the manifestation of the formations (sankhara) aggregate.

Nāmarūpaṃ is the cause and condition for the manifestation of the consciousness aggregate.

Paññāpanāya: This might have been rendered "for the description of the form aggregate". Paññāpanā is literally "making known" and something is "made known" either by becoming manifest or by being described. Footnote: Bhikkhu Bodi

Obviously, there appear to many contradictions between SN 22.82 and Dependant Origination, which include:

Is there a contradiction here? Why is this so? How is this resolved?

It's a sublime Dharma, hard to understand, so let's examine some analogies.

Modern physics says that there are electromagnetic waves, such as radio waves and visible light. We can imagine them as some surface where waves spread from the center: 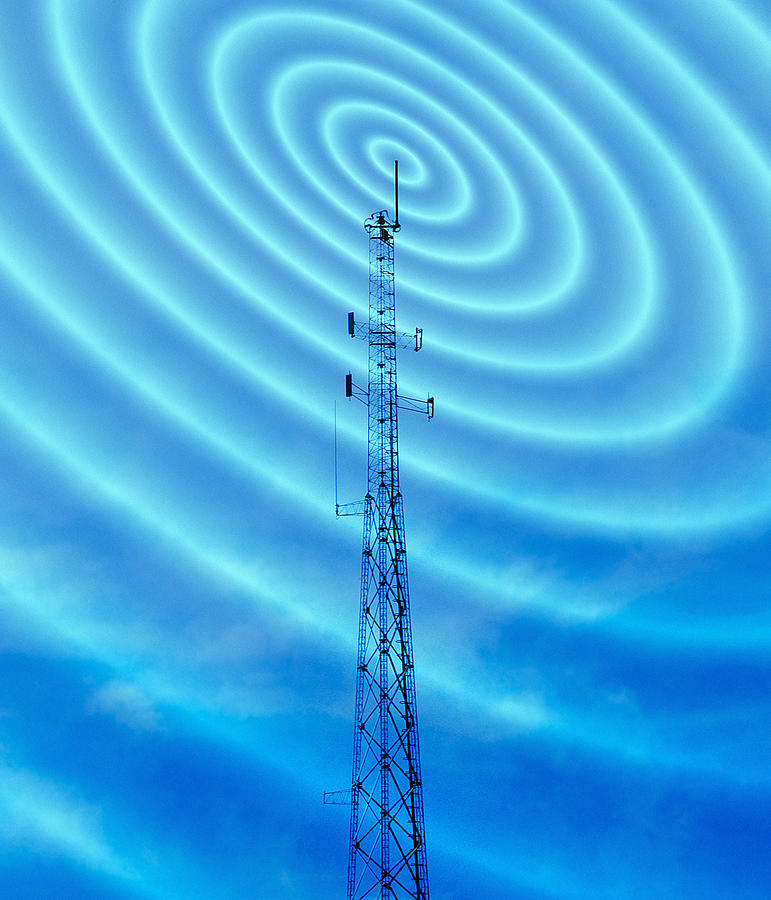 We can understand them by analogy with ocean waves: 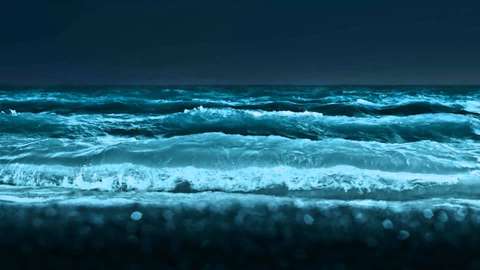 But there is a big difference: waves in the ocean have water beneath and wind above. So the surface is "material".

Electromagnetic waves, however, don't have anything beneath and anything above. It's an imaginary surface.

Now let us examine what is consciousness. We often imagine it as a result of contact of two things:

Thus we can say that consciousness is a result of contact.

It looks like ocean waves: there is something beneath (water, an organ of perception) and something above (wind, perceived object).

We can say that consciousness doesn't exist if there is no contact of organ of perception and object of perception.

Usually we imagine consciousness as some space that exists independently of everything else; when things appear in that space, they become perceived.

But Dharma asks us: are we sure that there is that immutable, metaphysical space called Consciousness?

We only know directly that consciousness appears when there is contact of organ and object. Does consciousness really exist apart from that?

If we examine that question, we can conclude that there is no actual reason to claim that consciousness exists constantly and independently; it's just our mental model.

Though we can speak about the reality as Only Consciousness (and sometimes it's useful), that is just our modeling; in direct perception Consciousness doesn't really exist (as something absolute or independent).

That helps to realize emptiness - no self - of all things and objects.

Actually all objects are our mental models we create from fluid momentary appearances.

Objects do not exist in themselves. They are only our way to associate individual sense data.

The primary phenomena are momentary appearances. "Waves of consciousness".

It's like there are waves, like electromagnetic waves, but we imagine them as ocean waves, with something beneath and something above. In fact, for direct observation something appears. And then we build some mental models on top of that - adding there dualities, like "object" and "organ", or "mind" and "matter".

Consider this: looking at sea, we see waves, and we conclude that there is water beneath and wind above.

Likewise, from "consciousness" we conclude there are forms and mentations of them (rupa & nama).

In both cases we talk about the process of creation of mental models.

Awakening and liberation from delusion means we drop thinking of mental models as real things.

When you have questions of this kind, it is good to refer to the next two levels of Dhamma. One can always find the correct meanings to the key words that come up in reading the Sutta Pitaka in other two levels of Dhamma. They are the Vibhanga (The Book of Divisions) of the Abhidamma Pitaka, and the Pattäna Dhamma.

In the Suttas what you normally find is the most basic of the given key word, or theme, or concept. It is only in the other two levels that we get to find the deeper meaning. In reading these, one will see that what is meant by hetu is the root causes, and not just other superficial causes.

Since PS describes the “cause and effect” in Buddha Dhamma, most people think “avijja paccaya sankhara” means “avijja causes sankhara”, or that “sankhara paccaya vinnana” means “sankhara causes vinnana”. Any effect must have a cause. But there can be possible causes without leading to any effects.

The causes for bringing up a new tree are embedded in a seed. But just because a seed is there, a tree is not going to appear. If the seed is kept in a cool, dry place, one could keep it that way for a long time. Or one could burn or crush the seed, and it will not bring up a tree.

In the above example, if one plants that seed (cause) in a the ground and provides water, nutrients, and sun light (suitable conditions), then the seed could germinate and grow to a tree (effect or the result).

Buddha taught just some aspect or some paccaya of an effect, because of the ability of listener. It doesn't mean an effect has just that paccaya in that sutta. Buddha can not teach everything to low ability people. Buddha choose some part of reality and sammuti, that proper for specific listener, then author each sutta to make that listener access to insight 4 noble truths to enlighten. If too much the listener may bored, but if too less the listener may doubt.

But in the full ability such as sāriputta, buddha teach him full causes and effects. So commentary said that abhidhamma, that is very advance in detail of realities (causes and effect), was learned by sāriputta.

This topic is the reason that why buddha taught abhidhamma to sāriputta, and why commentaries often said that abhidhamma is vipassanā's object. Also, the answer that why Mun Bhuridatta often carries abhidhammatthasaṅgaha pocket book with himself.

4 great matters, 24 matters' elements and some consciousnesses are causes for each other in the same time by sahajātapaccaya.

You must recite tipitaka to understand this answers. Also, you must notice the real life, too. This topic is about life, not just alphabet. For the example "can phassa arise without vedanā?", "Has or not self cakkhu-samphassajāvedanā, without color&consciousness?", etc.

I have a 2nd answer to my wonderful, insightful & important question.

In his SN, Bhikkhu Bodhi has made the footnote:

Paññāpanāya: This might have been rendered "for the description of the form aggregate". Paññāpanā is literally "making known" and something is "made known" either by becoming manifest or by being described.

This word 'paññāpanāya' is found in many suttas in relation to the teaching activity of the Buddha as 'declaration'. The Pali dictionaries say:

These are the ten questions The bhikkhu came to ask: Two about the aggregates, Whether the same, can there be, Designation and the cause, Two about identity, One each on gratification And this body with consciousness.

It was the questioner who used the term "what is the cause for paññāpanāya" (ko hetu ko paccayo paññāpanāya).

Thanissaro explanation is non-sense, illogical & without conviction, as follows:

Delineation (paññapana) literally means, "making discernible." This apparently refers to the intentional aspect of perception, which takes the objective side of experience and fabricates it into discernible objects. In the case of the aggregates, the four great existents, contact, and name-&-form provide the objective basis for discerning them, while the process of fabrication takes the raw material provided by the objective basis and turns it into discernible instances of the aggregates. This process is described in slightly different terms in SN 22.79.

This is the same causality as SN 22.56, although SN 22.56 is about aggregates subject to clinging, which states:

I have come to the conclusion the term 'paññāpanāya' in SN 22.82 and MN 109 is idiosyncratic to the questioner rather than a term the Buddha would ideally use because the term is not used in SN 22.56, which is an unprompted discourse.

It seems the questioner asked about the cause of 'paññāpanāya' & the Buddha has given a slightly different answer about the mere cause (hetu) of the mere aggregates.

In conclusion, SN 22.82 is only about what causes the aggregates existentially. It is not about how the aggregates are affected by the Dependent Origination of ignorance.

SN 22.82 appears to be about 'paññāpanāya', namely, how the aggregates manifest or come to be known. Therefore it uses the word 'hetu', which means preceding 'cause'.

SN 12.2 (dependent origination) is about 'samudhaya', namely, the origination of suffering, which is about how the aggregates found multiples times within the multiple conditions (paccaya) are tainted by ignorance leading to suffering.

Therefore, the two teachings (SN 22.82 & SN 12.2) appear completely different & unrelated to each other.

SN 22.82, in particular, shows how dependent origination (SN 12.2) is not about the reincarnation, come into existence &/or knowing (paññāpanāya) of the aggregates but about how the aggregates are tainted by ignorance & leading to suffering.

0
Are the Pali words "cause" ("hetu'), "condition" ("paccaya"), "nutriment" ("ahara") and "root" ("mula") synonyms?
0
Dependent Origination: causes vs conditions?
1
Once ignorance is removed ,is the cessation of suffering automatic?
-1
Does viewing consciousness as "real thing" bring suffering?

1
Why is 'attention' ('manasikara') included within 'nama-rupa'?
1
How can consciousness arise without the fuel?
4
How can Name-and-form be the cause and condition for the manifestation of the consciousness aggregate?
2
Why is the Pali word 'saṅkhārā' in Dependent Origination plural?
0
DN 15: Whose or which consciousness enters the mother's womb?
1
Dependent origination and the living arahat
3
Is dependent co-arising an "IF AND ONLY IF A THEN B" relation?
1
Why is it called "Nama" as in namarupam?'