How important is javana to the jhanas?

What role if any do javana play in learning and entering the jhanas? I'm reading a book on jhana and javana was brought up but i couldn't really understand the role it play in the jhanas.

I would say that this word has been conflated and in my experience unnecessary for entering jhana. please refer to the instructions on how to enter jhana found in the Sutta Pitaka.

This is picture that show consciousness's arising one by one (consciousness can arise just one per time per person.)

Javana is Pr to Jh in the below picture.

Parikamma is practicing consciousness. Upacāra is up level of parikamma. If Upacāra can up level enough to change to be appanā-jhāna, then gotrabhū will arise to prepare for jhāna. The arising step of consciousness will be as alike as the below picture.

But if Upacāra can not upgrade to jhāna level, 1 parikamma javana arise then 6 Upacāra javana arise, step by step. Then bhavaṅga arise, infinity. Then loop again. In pali canon, teachers just called them the same as "javana", because no arising of jhāna-consciousness, equal to nothing. 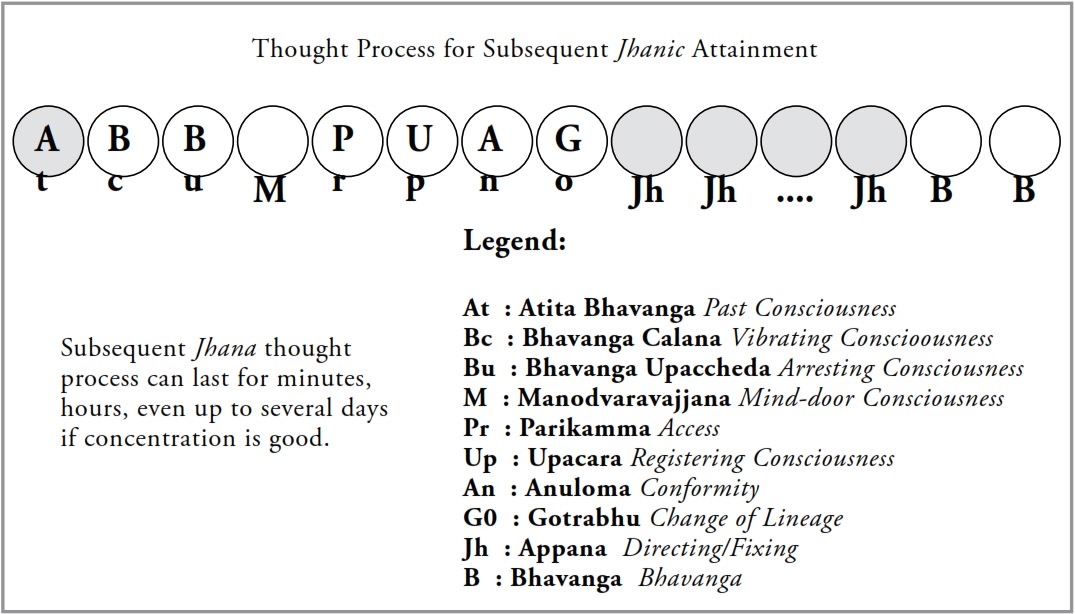 Not the answer you're looking for? Browse other questions tagged jhana or ask your own question.

7
Did the Buddha discover jhana by himself?
4
What to make of Jhanas as explained in the pragmatic dharma movement?
4
Is there any school or institution dedicated to teaching Jhana?
6
What is initial thought and discursive thought
1
What is the learning sign "uggahanimitta"?
2
Are learning signs and counterpart signs a must to enter jhana?
2
How to extend the counter-part sign? What even is this?
2
Buddhist Jhanas, how best to describe them?
3
Describe all the Jhanas in everyday language
4
Are the higher arupa jhanas supernatural states expanding beyond the physical body?