Was Anuruddha, one of the ten Great Disciples of the Buddha, born in Sri Lanka?

When I was searching for the translated name from Chinese 阿那律 to Sanskrit while attempting a comment on one post, I entered 阿那律 or Anuruddha to Google it came up with the list and the usual short brief at the right corner of the screen, to my amusement the brief said: 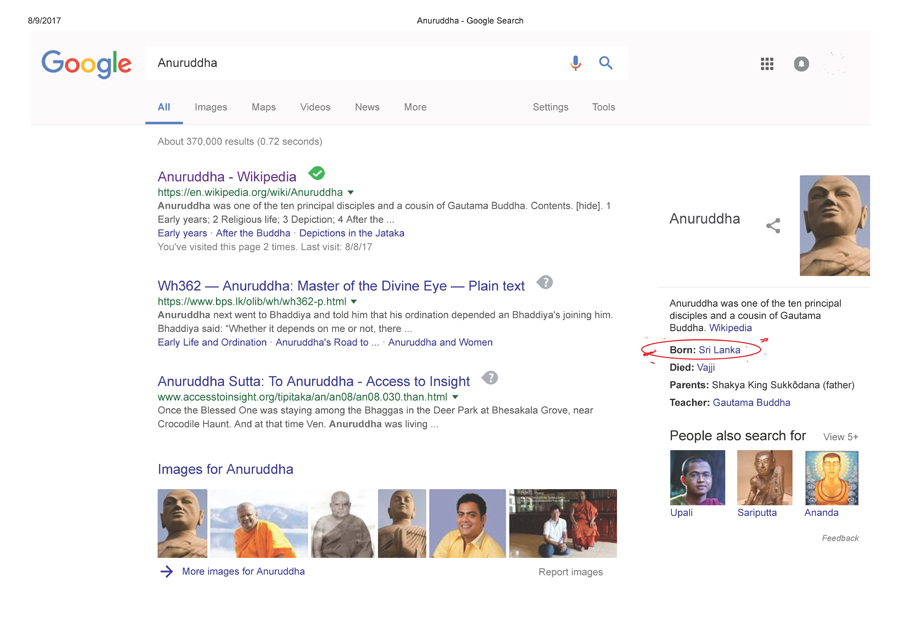 Though I open the brief the Wikipedia full page is Born: Kapilavastu, India

Is there a movement to relocate Buddhism (not just relocate, but part of the grand scheme to invent in the sense of re-invent Buddha's teachings) to be originated from Sri Lanka since the Sri Lankan Pali Canon is splendidly adored as the only authentic plus the most early Buddhism's teaching? - As the first step. Now here comes the next step to relocate Buddha gradually first by migrating :D !! one of his ten major disciples? I'm diligently waiting to be enlightened in this context.

I've no previous experience with how Google creates this kind of summary.

I'm not sure I understand where Google got that data from, to put in its summary -- "Sri Lanka" isn't given in any version of the history of the Wikipedia article.

There are modern Anuruddhas born in Sri Lanka (e.g. a cricketer) but that (mixing different people with the same name) seems like an unlikely or silly mistake for Google to make.

The image (of a statue) in the Google summary does comes from a different web site (not Wikipedia) though, so maybe Google does aggregate data from different sites somehow.

Based on this page I wonder if it's possible that Google prefers to scrape its data from Wikidata instead of from Wikipedia -- the Wikidata entry for Anuruddha doesn't include a birth place (it was in the Wikipedia article but not in the Persondata template when the Persondata template was migrated to Wikidata) so perhaps Google is aggregating from several sites, getting its information mixed up, or confusing it with a modern Anaruddha?

If you want to report a correction to Google's summary, perhaps you could try editing the Wikidata entry, and/or pressing the Feedback link on the Google summary.

Not the answer you're looking for? Browse other questions tagged pali-canon early-buddhism or ask your own question.

3
Is it true that Lord Buddha was born in Sri Lanka?
3
Unclarity on Sati-Sampajañña

14
How was the Buddha Jayanti edition of the Tripitaka derived?
7
Where is the story that Buddha was worried about a monk who meditated with a straight back?
1
Was Buddhism during the life of the Buddha unique in the history of religion per Huston Smith?
1
Was the Abhidhamma taught by the Buddha?