Why did physical representations of the Buddha only start to appear a few centuries after his death?

Prior to around the 1st century CE, Buddhist art tended not to depict the Buddha himself, instead preferring to depict relics/symbols of the Buddha, such as his footprints, or the Bodhi tree. That period (the so-called "aniconic" period) yielded works like these: 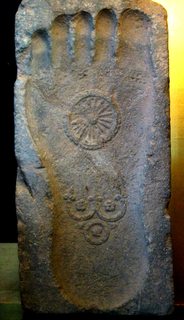 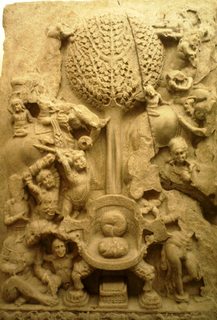 However, after around the 1st century CE, we have depictions of the Buddha in human form from all over the Buddhosphere (so to speak).

(This question is sect-agnostic, as far as I know, since I am not aware of any sect-specific differences in the way art was produced c. the 1st century CE.)

It seems that recent scholarship on Buddhism, at least outside the field of art history, has tended to downplay this change. Donald Lopez has written, in a chapter called “The Idol” in his From Stone to Flesh: A Short History of the Buddha (pp.37-8):

Art historians have observed this absence [of early Buddha images] and inferred that the Buddha, or his immediate followers, had forbidden the making or worship of his image. And they have speculated that the practice of representing the Buddha in human form – which, depending on one’s perspective, might be termed the making of images or the making of idols – had, in fact, been introduced from abroad – from the West, specifically by Greeks in the region of Gandhara (in what is now Pakistan and Afghanistan).

This view that the Buddha prohibited the worship of his form is consistent with the later nineteenth- and early twentieth-century view of the Buddha as a rationalist who never would have condoned idol worship; the practice could have entered his tradition only from abroad as a concession to the masses in the centuries after his passage into nirvana. We might note as well that a century after this aniconism theory was proposed, no proscriptions against making images of the Buddha have been located in what scholars would regard as an early Buddhist text, nor have any prescriptions for his representation been found; such prescriptions become prevalent in some of the Mahāyana sutras that date from the first centuries of the Common Era. The so-called aniconism debate has persisted, though[.]

And in the introduction to an edited volume on a related issue, Embodying the Dharma: Buddhist Relic Veneration in Asia (pp. 10-11), Kevin Trainor writes:

In some respects, we can see a parallel between the theory that sangha members were explicitly prohibited from participation in the relic cult and the widely accepted hypothesis that there was for centuries a prohibition against representing the body of the Buddha in paintings and images, what is generally called the “aniconic” period in early Buddhism. Here again part of the evidence is negative: no images survive from the first several centuries of the Buddhist movement. This, coupled with early representations that depict the Buddha’s physical presence through symbols such as a royal umbrella or his throne of enlightenment, led to the widely accepted assertion that early Buddhist were prohibited from representing his bodily form out of respect for his nirvanic status. As with the dubious assertion that early Buddhist monks and nuns were initially prohibited from participating in relic veneration, however, the theory of an aniconic period is driven more by presumed doctrinal ideals than by compelling material evidence. Indeed, when the centrality of the practice of relic veneration during this period is taken into account, the existence of a prohibition against representing his physical body seems even less likely.

The portion of Lopez’s text that I have highlighted suggests that the answer to the second question is no: the making of images was neither forbidden nor explicitly called for at first. Trainor (in the highlighted sections) implies that “negative evidence” and assumptions colored by an implicit bias against “superstition” and “idolatry” are a weak foundation for any theory. Still, it seems to me that that since we don’t have any early images, no definitive refutation of the aniconic view is possible.

Both Lopez and Trainor cite another study which would be worth consulting: Klemens Karlsson, Face to Face with the Absent Buddha: The Formation of Buddhist Aniconic Art (Uppsala, Sweden: Uppsala University Library, 1999).

It was the arrival of the Greeks with Alexander, that caused the making of statues. You can see the first imagery influenced from the greeks in the Earliest sculptures. The Vinaya Pitaka and other Suttas of the Tripitaka mention often what the Buddha stated about worshipping images in his stead, or worshipping images in any sense. The Buddha also explained to Ananda about the different kind of Stupas, whicvh are also Rupa-Dhammas. he once told a monk worshipping an image instead of Buddha as his representative, that "how can the worship of a rotten impermanent stinking physical form represent me and my teachings?' he did not forbid images, but he did explain how there is nothing but unenlightenment in the looking to images as some kind of object of worship, clinging, or to beseech blessings.

During King Kanishka's period ( 78 AD to 151 AD), images of the Buddha made based on 32 physical signs. This is regarded as one of the first place where human form of Buddha appeared in art. Source {http://en.m.wikipedia.org/wiki/Kanishka}

People were afraid to depict the Buddha fearing that they might get the depictions of the 32 marks and 80 marks or any other physical characteristics wrong hence gaining demerit.

5
Did the Buddha discourage antropomorphic representations of himself?
5
Iconography in Buddhism - from the Greeks? And why isn't the Buddha bald?
4
Halo on the Buddha