A Creation Story in Buddhism?

Some major religions like Christianity, Islam, and Judaism have a Creation Story, which describes how God created the universe. These stories describe how a deity created the earth and then the first man and woman, who are regarded as the father and mother of all mankind.

Does Buddhism also have a similar Creation Story?

The creation or non-creation of the universe is among of the unanswered questions of the Buddha i.e.

Interestingly there is a creation myth in the Aggañña Sutta. But it don't think it should be taken too seriously as I believe it is a satire on the caste system.

Simply, Buddhism does not have such kind of Creation story since it rejects the concept of Creator God. Instead, in the Aganna Sutta, the Buddha tells the story of how the human beings came to dwell on Earth. The Buddha told that sooner or later, after a very long time, there would be a time when the world shrinks. As the universe shrinks, many of its inhabitants would die. Of these deceased creatures, some were born again (due to good karma) in the Heavenly realm of Abbhasara (Lucid Light). There, they floated for a very - very long time, as a bodiless, radiating extreme light. They don’t eat or drink, as they nourish themselves from pure spiritual joy.

The following is how the scholars drew a conclusion that the Buddha's Anganna Sutta corresponds very closely to the scientific view. "The Buddha seems to present a model of cosmology wherein the universe expands and contracts over extremely long periods of time, this description has been found by some to be consistent with the expanding universe model and Big Bang. The Buddha seems to be saying here that the universe expands outward, reaches a stabilising point, and then reverts its motion back toward a central point resulting in its destruction, this process again to be repeated infinitely. Throughout this expanding and contracting process, the objects found within the universe undergo periods of development and change over a long stretch of time, according to the environment in which they find themselves. Following this passage above, the Buddha goes on to say that the “beings” he described in this paragraph become attached to an earthlike planet, get reborn there, and remain there for the duration of the life. As a consequence of this, physical characteristics change and evolutionary changes takes place. This is often interpreted as a very rough theory of evolution. Furthermore, the Aggañña Sutta presents water as pre-existent to earthlike planets, with the planet forming with water and the life moving from the water onto the earth. Buddha does not talk about a specific earth, but about earthlike planets in general."

If you were to refer to a theory of Creation in the time of the Bhudda, the closest occurence of it would be the dualist cosmology of the Samkhya. For philosophy was the leading current of thought at the time (rationalization & systematization of the metaphysical, religious and ritualistic Brahmanism;) and Samkhya was its leading philosophy, before Buddhism perfected it. The Samkhya sees creation as follows:

When these two distinct principles meet, there is creation. 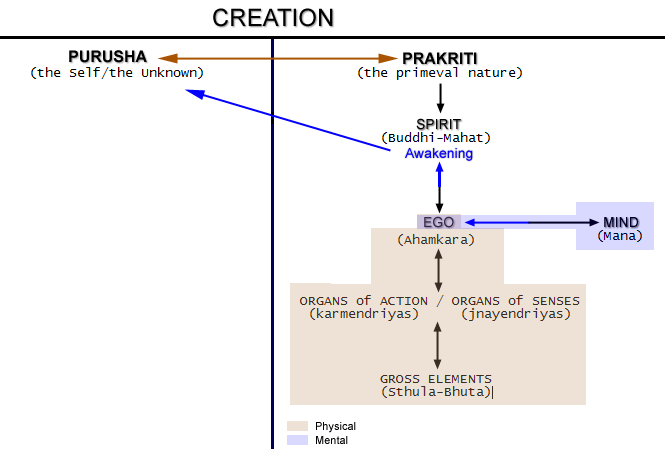 In Buddhism (as in Samkhya,) liberation consists in getting rid of the influence of the gross elements, the organs of action and senses, the mind, and the Ego; so as to reach the Awakening and enter the states of the unmanifested/avyakta (which differ slightly among the different Indian philosophies and religious beliefs, but remain, for all of them, in the phenomenal realm of Nature.)
As far as going back to the Self (Purusha,) Buddhism does not seem to be concerned with that.

Understanding the inverse process of creation (liberation) that these philosophical schools (Samkhya, Bhuddism and Yoga) teach, allows people to better understand the process of creation, that is pretty much the same for all the Indian philosophies (including Brahmanism, in its purely religious form.)

Share
Improve this answer
edited Aug 12 '14 at 11:22
answered Aug 11 '14 at 15:12
user635user635
Add a comment  |
-1
Want to improve this post? Provide detailed answers to this question, including citations and an explanation of why your answer is correct. Answers without enough detail may be edited or deleted.

12
What/Who is 'Mara' in Buddhism?
11
How does conversion work in Buddhism?
5
Does Buddhism have a concept of blasphemy?
4
Why is Buddhism less evangelical than Christianity?
4
How does Buddhism explain the creation of everything (universe)
11
How to refute the idea that Buddhism might be actually "too extreme"?
3
Is Buddhism hell falsely claimed on wikipedia?
3
Buddhism is practiced in many countries by many different peoples. How do Buddhists in America differ in their beliefs, values
2
Days related to Buddhism