Does any/every form of lying violate the precept of "not-lying"?

What if one thought it wiser to tell a lie, because the truth could potentially endanger one's own life?

For instance, someone might lie that they believe in a supreme being, in reply to a question being asked by their parents who have strong faith. This is a very sensitive topic in some cultures or countries, to the point that parents might kick their son or daughter out of the house.

This is an example where the intention is to maintain personal security.

Does this violate the precept of not-lying? Or, instead of being a lie, might this be considered like the "noble silence" that Buddha once exhibited when the listener was incapable of understanding the Dhamma?

The motivation DOES make a difference to the karma of an action. The classic discussion about karma stresses motivation.

Karma as action denotes an act of mental volition (cetanā), and the bodily and verbal actions that stem from it.

This is almost literally from Vasubandhu's Abhidharma-kośa (4th century CE).

So the mental volition (that is - motivation) is the whole point. That makes sense: everything in Buddhism is about consciousness first.

So if you lie to protect jews from the Nazis, to use a modern example - that is not necessarily negative karma. If you had taken lay vows, as a Tibetan Buddhist you would probably do some purification ritual to be sure, but since the motivation is to help someone & you are also preventing people from harming (the nazis) - on balance it is better to lie in such circumstances.

Your example is a bit less clear. I do think it is better to stay silent than to actively lie about your faith. If you have taken lay vows, you have at the very least taken on the attempt not to lie. Staying silent does not break your vow.

The vow to not-lie is also sometimes explained as follows:

Do not distort fact ... Sometimes the use of words can make something seem acceptable, when it could have been said very differently and be totally unacceptable. This is not a lie, but a distortion of fact.

(Essays on Karma, by Katinka Hesselink)

The simple answer is "Yes" However, there are different weight in each Kamma. A person who tells a lie to protect his life has the least weight. It also depends on the person. Monks are expected to follow the precepts more vigorously than a lay person.

See the current discussion on a similar subject.

Any statement meeting the following conditions is ling. 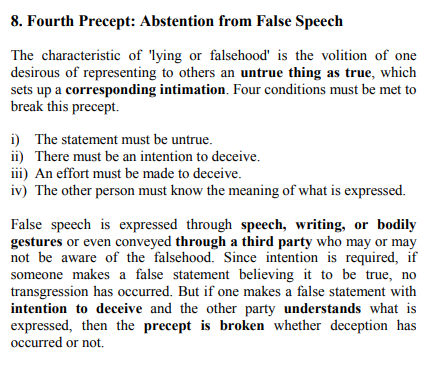 So there will be dilemmas like if you tell the truth someone may lose their life or similar situation. One must weigh one's commitment to the precepts and the consequences.

Not the answer you're looking for? Browse other questions tagged the-buddha five-precepts teaching right-intention lie or ask your own question.

5
Should a person never lie?
2
Resolving right action & intention in a white lie

4
Does not keeping a promise violate the precept on lying? What if I promised myself?
35
Does illegal downloading or viewing of copyright material violate the second precept?
3
Does the second precept only apply to theft?
5
Performing magic breaking the fourth precept(lying)?
4
Is lying at a job interview breaking a precept?
8
Does using a pdf for sale for free violate the 2nd precept?
8
Does the fifth precept ban smoking?
2
Are there any exceptions to the first precept?