If someone was an Once-returner in last life how can he know that ?

There are 4 stages in the path to nirvana. 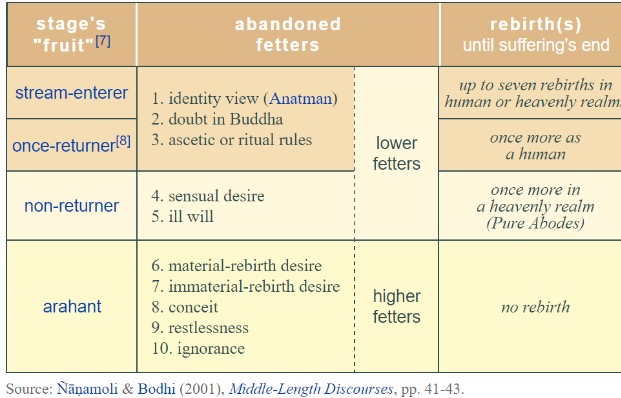 one of them is called "Once-returner" and they will be born only once as a human. So my question is , If Someone was an once-returner in last life , how can he know it in this life ? And if he does nothing in this life to attain nirvana, will he automatically be arahath and no rebirths?

theravada nirvana
Share
Improve this question
asked May 25 '17 at 15:42

"So my question is , If Someone was an once-returner in last life , how can he know it in this life ?"

When one has attained to stream entry and the higher stages such as Once-returner etc. both ones morality and spiritual faculties (indriyas) are well developed and firmly established. When they are mature and well developed we call them the Five Powers. They work in unison each balancing and strengthening each other further.

This creates a powerful momentum and that momentum might mean that a Once-returner does not have the possible to "stop" on his/her path. That being would be so inclined towards Nibbana that anything else is not possible.

"And if he does nothing in this life to attain nirvana, will he automatically be arahath and no rebirths?"

I'm not sure its possible to do nothing once one has entered into the stream.

Either way the Once-returner still needs to practice in order to remove the 5 higher fetters thereby attaining to Arahantship.

A Once-returner will be reborn one more time into the Sense-sphere Realm which contains; the Hell realm, Pretas, Animal Kingdom, Asuras, Human Realm and Deva Realm (heavenly realm).

As the 3 lower fetters has been destroyed a Once-returner can only be reborn in either the Human or Heavenly Realm.

In the Udakupama Sutta: The Water Simile is is said that there are seven types of individuals are to be found existing in the world. Of the seven, the once-returner:

is like the case where an individual comes to the surface, [seeing,] 'Conviction in skillful qualities is good, conscience is good, concern is good, persistence is good, discernment with regard to skillful qualities is good.' With the total ending of [the first] three fetters, and with the attenuation of passion, aversion, & delusion, he becomes a once-returner, who — on returning only one more time to this world — will make an ending to stress.

In coming into the world, a once-returner knows who or what s/he is because of a special ability. The ability to figure this out is called the “namarupa paricceda nana“. This basically means “rupa” are according “nama” - one’s body is according to one’s thinking. It is because he/she is likely to display qualities or “gathi” of of the previous birth.

Please see https://what-buddha-said.net/Canon/Sutta/KN/Dhammapada.Verse_18.story.htm Once returner, Sumanadevi, youngest daughter of Anathapindika, she knew what is what and even remind her father, a sottappti at her death-bed. Their Dhamma is never destroyed after-life and when it is time just by reviewing the nana already attained, they will get nibbana.

And if he does nothing in this life to attain nirvana, will he automatically be arahath and no rebirths?

He may becomes a non returner and be born in the pure abodes.

Once-returner, Sakadagami, has to remove first 3 fetters and reduce binding strength in 4 and 5 fetters. It's up for debate which world they would reappear after death. Buddha said Loka which could mean heaven or human realm. However, a case example of a sakadagami death during Buddha's time, a sakadagami appeared in heaven Dusita.

IMO, sakadagami would reappear once in heaven. In contrast with Ekpechi Stream-enterer (stream enterer who would be reborn in human world one more time). For Ekpechi, Buddha used reborn into a clan , kula, which exclusively human.

I am studying anagami according to Buddha's words and found something interesting that others may have noticed too.

It is traditionally known that anagami has to remove 5 lower fetters to be one but I found a few sutta that might not be the case. Buddha only explicitly mentioned that those in Akanittha have eliminated lower 5 fetters but not for the other 4 categories; Āviha, Ātappa, Sudassa, Sudassī.

example is from Metta Sutta ii, where Buddha said noble disciples who practice Kindness medition and see 5 sense gates as impermanent etc., upon breaking up of body, he would reappear in Suddhavasa as non-returner. There is no mentioning of 5 lower fetters here (but Noble disciples are automatically known that they have broken first 3 fetters).

I have not read in the Pali suttas of any examples of when a non-arahant noble-one was reincarnated back to earth as a human being.

For example, the idea that a stream-enterer has seven more lives has no basis in the suttas because the sutta (SN 13.1) that has the phrase "seven more times at most" does not mention "lives" but refers to seven more fetters to breakthrough.

I have not read anywhere a logical explanation of what the term "once-returner" means, apart from the fetters broken through or reduced.

Since all arahants at one time were stream-enterers, these terms obviously do not refer to lifetimes.

Not the answer you're looking for? Browse other questions tagged theravada nirvana or ask your own question.

5
Does Buddhism teach about “Parallel worlds”
3
Total number of beings in the entire space as we know is constant? Increases? Decreases?
0
Why is Buddha needed?
5
Can someone address this critique?
0
Can we say cause/causes behind the world is/are eternal?
4
What is the physics of the 'phenomena' of Nirvana?
3
Is being conscious of actions' consequences enough to attain nibbana?