Neither-pleasant-nor-unpleasant feeling vs not feeling

What's the difference? I'm having difficulty thinking of any real neutral feelings I actually experience.

For example, there's eating a food that is perceived as pleasant, and eating a food that is perceived as unpleasant. If your senses were unguarded, you would then experience respectively a pleasant or unpleasant feeling. But, when I eat something that is bland or that could not be considered pleasant or unpleasant, then even thinking back to when I didn't remain mindful and guarded, I can't remember ever feeling neutral about it. I didn't feel anything about it. I just ate it.

Is it simply a matter of how I'm using and understanding the word "feeling" itself?

Edit: It seems what I was getting hung up on was simply a translation/language/connotations issue. This page explains that it's somewhat different from the common way the word feeling is often used in English. Thank you for your responses.

This is a classic dilemma for almost every new practitioner of Buddhism. The question goes into so much depth and even lead to Nibbana if studied in proper detail. Apologies for the long answer, but there is no shorter way of explaining this.

First things first, everyone feels through their senses. Even the Arahath feels. Otherwise, we would be able to attain Nibbana, by severing the nervous connections. What matters to the Buddhist is not what you feel through the senses; rather, what value you assign for that sensation. Unless you are aware of the process of your mind assigning values to sensations Moha (inability to see things as they are) tricks you to either hold onto that sensation (Lobha) and form attachments or to desist that sensation (Dwesha) and form hatred/dislike towards it. Simply put, we translate the actual sensations into a totally different set of values in out mind.

Wait a minute, those values help me survive. So how can they be bad? Of cause, some of them will help your survival. As an example moving away from dangerous situation. So, obtaining sensory data is important. But forming attachments and pursuing them or forming hatred and dislike and trying to rid them is the path to generating both 'Sansara' habits (habits that could perpetuate from this life and next) as well as Karma. In Buddhism, all forms of likes and dislikes are attachments. You form attachment to some sensation by liking it, or disliking it.

Not all attachments are bad! If these attachments help you stop the cycle of birth and death, it will bring you positive results. In fact you need such attachments to obtain Nibbana. Be warned, there is a fine line here. At some point in the path to Nibbana you have to sever these attachments. Huh? Yes even the ones which help you attain Nibbana. This is why Budhdha taught us to take Dhamma as a vessel to cross the treacherous river of Sansara, and leave the vessel at the banks rather than carrying it along.

So everything is centered around Nibbana? Yes it is, for a Buddhist. As Buddhists the ultimate freedom from all forms of suffering is Nibbana. Buddhism teaches us that Sansara is a treacherous cycle of endless birth and death, in different forms and planes. As long as there is YOU (one capable of suffering) there will be suffering. Suffering is the way of the world. No one can escape and no one can finish suffering, through the act of suffering. The only way to stop suffering is to remove the sufferer. That is Nibbana, which makes it the most important thing to achieve. It is the solution to ALL your problems!

Why is it bad to assign values to a feeling? The process of assigning value to feelings is the primary reason for all beings to be slaves of Moha. Moha means the inability to see things as they are. Lets take an example: Say your partner brings you a piece of cake. And tell you 'I made this specially for you'. You eat the piece of cake and it tastes wonderful. Halfway through, you find lots of dead insects in the cake and get to know that it is from a bakery with some questionable hygiene. If you take the next bite from the cake would it taste as good as before? Would you eat it at all? what changed between learning about the piece of cake, before and after? did the cake change? or your mind? This is how Moha plays tricks on you. The piece of cake has a taste, a smell and a form. But what you perceive is not the reality because Moha had tricked you. That's why the initial bites before learning more information about it tasted better. You were tricked by Moha into forming Lobha or likeness. Because of that, you feel the form, smell, taste much more than the reality. Once you learn more information about the cake, Moha tricks you again, by forming Dwesha/dislike towards the cake. You feel betrayed and angry and the cake tastes terrible and you simply don't want to eat it anymore. If we plot the events on a crude graph: 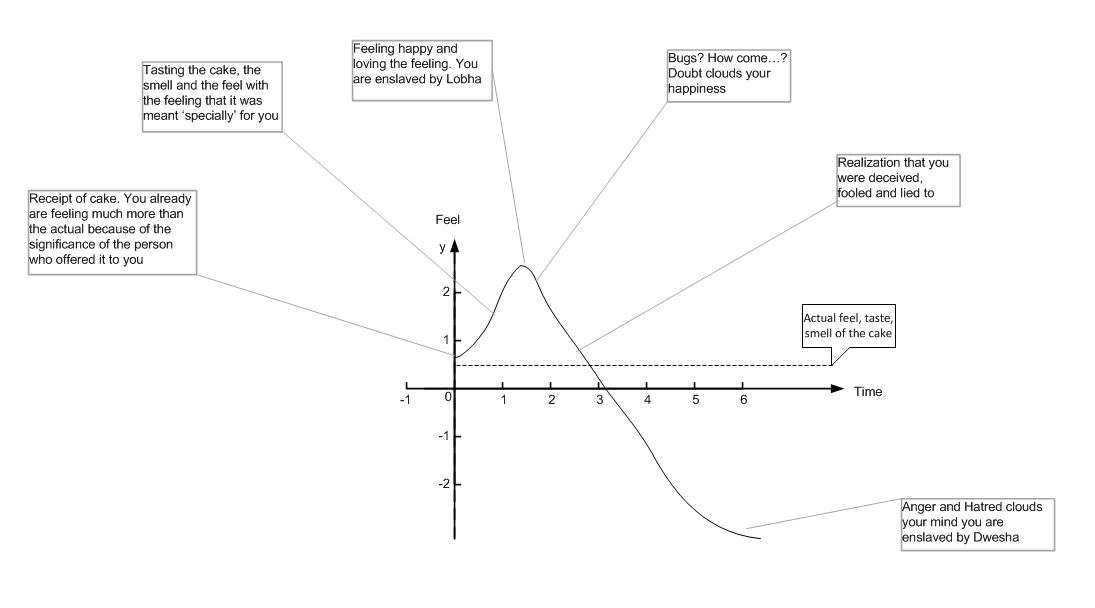 Everything above and below the dotted line which depict the actual taste, smell, feel of the cake are the effect of Moha. When Moha is not operating (at Arahath state) you would be able to feel the true taste of the cake. Nothing more, nothing less. Just the actual. This is why Arhath state is known as 'the awakened state'.

Does this mean most of the time we are perceiving more than we actually feel? Yes of cause. Until one is Arhath, they will be a slave to Moha, which means they don't see the world as it is. They see their own perception of the world as interpreted through assigned values. This is the main reason for the endless wandering in Sansara.

So how can I guard myself against it? Stop trying not to feel. That won't work. Try to see the reality of things through understanding of Dhamma. Being mindful and perceiving your thoughts is key. When you see the reality, as an effect of your effort to see things without any bias (without the effects of Moha), you will form less and less attachments, ultimately none - Arhath.

EDIT: As a person who did not study Buddhism in English, my terminology could be different. So, I have put down some explanations on how certain terms should be taken.

A pleasant feeling generates a craving, such as love, lust & greed, which wants to 'pull in' or acquire a sense object.

An unpleasant feeling generates a craving, such as irritation, hatred & anger, which wants to 'push away' or destroy a sense object.

A 'vague' neither-pleasant-nor-unpleasant feeling can generate a craving, such as confusion, delusion & ignorance (not-knowing), which 'circles around' or does not understand a sense object.

Otherwise, a neither-pleasant-nor-unpleasant feeling, such as of equanimity, can still give rise to ignorance when the true nature of the sense impression & sense object is not comprehended; such as when a person is 'spaced-out', like a zombie; or has 'oneness' in concentration.

When one is touched by a neither-painful-nor-pleasant feeling, if one does not understand as it actually is the origination, the disappearance, the gratification, the danger and the escape in regard to that feeling, then the underlying tendency to ignorance lies within one. Bhikkhus, that one shall here and now make an end of suffering... without extirpating the underlying tendency to ignorance in regard to neither-painful-nor-pleasant feeling, without abandoning ignorance and arousing true knowledge — this is impossible.

Therefore, imagine a sense impression where the mind feels impacted but in strange way.

For example, you see a person walking upside-down on the ceiling of a house. The feeling here is very strong; the mind is strongly impacted by the sense experience; but the feeling here is not pleasant; not unpleasant; but strange; uncertain; wonderment; vague. 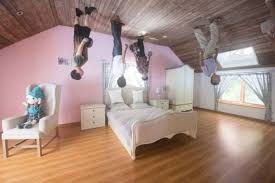 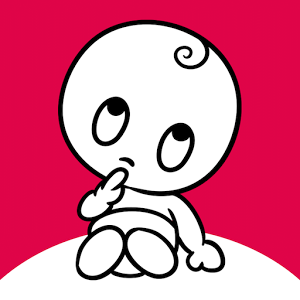 I think of moments of attention strung together as a type of wind. The wind will push me depending on which side of my sail it strikes. But if I were a sailor, I could set my sail so that it exactly aligns with the wind and this feels totally different. Luffing sail, wobbly, no forward momentum. This is a feeling tone that could rapidly shift at any moment. Is this neither pleasant nor unpleasant?

Not the answer you're looking for? Browse other questions tagged mind or ask your own question.

6
Beings who are not aware of their own existence?
1
What is the appeal of not Re-incarnating?
3
Is the Mind (Citta) the Self? If not, what is it?
2
Arising of Contact, Feeling, Perception, Thinking
1
Does it matter if the mind is neurologically originated or not?
3
What is the meaning of “Nothing new will be said here, nor have I any skill in composition. Therefore I do not imagine that I can benefit others.”
1
Is the Mind [essentially] bound to ignorance “not-knowing” or free?