Is Buddhism the fastest growing religion in the West

This is a companion question to this one.

I've heard it said that Buddhism is the fastest growing religion in the West. Is that true? Does anyone have any statistics to support or refute this? It seems that this wouldn't be right in absolute terms but might be true in percentage growth for some countries.

I appreciate that many people find the term 'The West' unsatisfactory. However for this could we use the definition from here:

cultures that are directly derived from and influenced by European cultures

so this include be Europe, North American plus Australia and New Zealand.

Is Buddhism the fastest growing religion in the west?

Well according to Asian Tribune, an internet daily newspaper, in a story Buddhism fastest growing religion in West from April 7, 2008.

Buddhism is being recognized as the fastest growing religion in Western societies both in terms of new converts and more so in terms of friends of Buddhism, who seek to study and practice various aspects of Buddhism.

This project noted that while 7% of the world's total population is Buddhist, 99% of these Buddhists live in the Asia-Pacific region. All other areas including North America, Latin America, and Europe have 1% or less of their populations identifying as Buddhist.

If only 1% of Western populations are Buddhist, what is the remaining makeup? (At this point I had to narrow the question to the US as I was unable to find comprehensive info for the west in general.)
But for the US, for example, according to Pew Research Center, U.S. doesn't rank high in religious diversity Americans are:

But these figures are far from static. According to the most comprehensive Pew Research document I found, U.S.Religious Landscape Survey, a full 28% percent of Americans have changed their religious affiliation since childhood. (This does not include changing from one type of Protestantism to another; it would be 44% if that was included.) So what are they converting to? Lots of things including Buddhism.

• In sharp contrast to Islam and Hinduism, Buddhism in the U.S. is primarily made up of native-born adherents, whites and converts. Only one-in-three American Buddhists describe their race as Asian, while nearly three-in-four Buddhists say they are converts to Buddhism.

72% of American Buddhists are converts as compared to 27% originally born Buddhists.

An interesting fact is that the report states that only 50% of those raised as Buddhists in the US, still consider themselves Buddhist. So Buddhism in the US has simultaneously one of the highest rates of conversion from other religions to it and one of the lowest rates of retention of those born into it. (Lots of folks looking for something new I guess!)

But these American Buddhists tend to be satisfied with their personal lives. In a survey question (from the Pew Landscape report) asking "All in all, are you satisfied or dissatisfied with the way things are going in your personal life?" 90% of Buddhist respondents stated satisfied; the highest percentage of any religious group. Only 8% reported "dissatisfied"; the lowest of any religious group.

But I'll wind it up with the observation from the Pew Landscape report that all religious groups in the US are continually gaining and losing members at all times. With the US Buddhist population being 72% converts, the half of the originally born Buddhists who leave Buddhism still leave it in a net gain category (based on "Childhood Versus Current Affiliation of U.S. Adults" on page 24 of U.S.Religious Landscape Survey).

Buddist gains are .3%. That sounds small until you look at all mainstream groups which are in the negative. In fact, the only groups that have a higher percentage gain are "unaffiliated" which is not a religion and "other faiths" which is the very small group of religions so small they are not broken out separately. So in that sense, you could perhaps say Buddhism is the fastest growing religion in the US. :)

My answer will focus on Europe mainly.

According to the published studies, the fastest growing religion in Europe is Islam.

In the table below one can notice that between 1990 and 2010 the number of Muslim increased by 48.9% and it is estimated that the increase will continue. (see the whole article here). 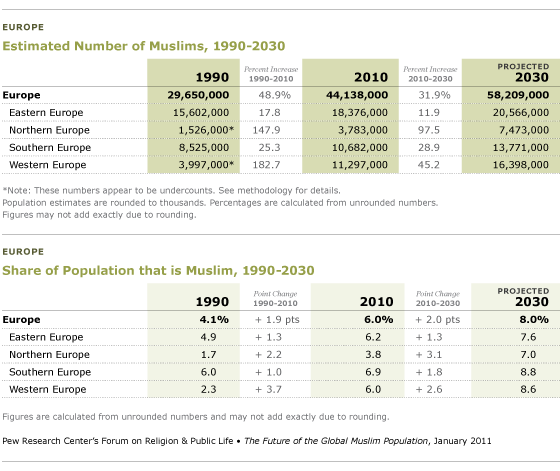 One may argue that those numbers reflect the ongoing immigration, but those immigrants will mostly stay in Europe, settle down and have families so there is no point in excluding them in the statistics.

When we look at the age breakdown, one can immediately notice that in the age group <25 Islam is the leading religion and only in the ageing group (>50) Christianity is still the biggest one.

As for the Buddhism, one can see that the 'other religions' including Buddhism did not change the overall percentage much between 2001 and 2011.

All in all, the data above suggests that it is Islam that takes the lead in the West.

Albert Einstein apparently called Buddhism the religion of the future and the reason it is so popular in the west is because it gives you the choice to either believe in God or not to. Also you do not have to believe in anything you don't want to and have to focus on doing good work by following the 8 Fold Path. So the religion is more like a philosophy and a way of life and young people think that is very cool. Also Buddhism was never spread by violence like the Crusades and is very tolerant of all other religions. Plus many Hollywood movie stars are Buddhist and the Dalai Lama is the most popular religious figure on the world scene. Today in the west there are more Buddhists than Muslims and Hindus and it is the 3rd largest religion after Christianity and Judaism. Also many scholars believe that a lot of the NT is based on Buddhism and that Jesus studied Buddhism during what is referdd to as his "lost years" between the age of 12 and 30. Hence Buddhism is very compatible with Christians. Also many White people feel that their ancestors were actually closer to Buddhism than to Christianity and this feeling was also shared by Hitler of all people.

Not the answer you're looking for? Browse other questions tagged demographics or ask your own question.