Stupa/Chorten, Pagoda, Vihara are places to achieve peace. But I never thought that those places are graves. I found this, Symbolism of the Stupa/Chrten:

The perfect proportions of the Buddha’s body corresponds to the design of religious monuments. Its architecture developed from the pre-Buddhist Indian grave-mound. Under these mounds the saintly ascetic were buried; their bodies were seated on the ground and covered with earth. These dome-shaped graves, or tumuli, of the saints were regarded as holy places. And were destinations for pilgrimage for the devotional and places of practice for meditators.

Does that mean all those monuments are explaining life (body and soul)?

The Buddha said this about the body of living being (quoting the 7th point at the bottom of page 131 of The Buddha and His Dhamma by Dr B. R. Ambedkar):

The body of a living being consists of the combination of four great elements, viz., earth, water, fire and air, and when this combination is resolved into the four component elements, dissolution ensues.

What is shown is A STUPA, usually housing the cremated remains or possessions that are considered sacred. In Sri Lanka we call it “The dagaba” (from Sanskrit dhatu- element, component, or relic + garbha - storehouse or repository). Dagaba is of pre-buddhistic era in origin, and is a deeply respected or admiration for symbol of the Buddhist creed. In the Sri Lankan version (the first pic. In the OP) it is covered with pure white lime plaster (It is not the ‘white’ achieved by mixing Rickette’ blue). As Buddhism was introduced in different regions, the basic architectural features of stupas were transformed into a variety of shapes reflecting the artistic expressions of those cultures. In Sri Lanka there are five shapes that are most prominent.

Of all the Stupa / Dagaba of this world, the most revered Dagaba is the Ruwanweli-Saya, found in the Historic City of Anuradhapura, Sri Lanka. It is also known as Mahathupa, Swarnamali Chaitya, Suvarnamali Mahaceti (in Pali) and Rathnamali Dagaba. After The Buddha's Parinibbāna, His relics were enshrined and worshipped in stupas. This pinnacle for Buddhists all round the world, the Ruwanweli-Saya, contains the largest portion of relics from the pyre of the sacred body of the Buddha. According to the ancient chronicle Dhatuwamsa, one eighth of the whole-body-relics of the Buddha has been deposited in the Stupa making it one of the treasured places of worship for Buddhists.

There is a great power generated from this Stupa and it is visible to this date. The energy radiating from within it is linked up with those meditating around the Maha-thupa. There is a legend that says that at the time when the Dhamma that He preached cease to be heard, all relics of the world will come to the Maha-thupa and perform a coming together of the body-form. – a kind of ‘Yama Maha Pelahara’. BTW… ‘Yama Maha Pelahara’ – is a twin miracle, a power said to have been possessed by the Buddha to cause a stream of fire to issue from one part of His body and a stream of water from another at the same time, which is a power to issue such streams together from eyes, ears and nostrils. 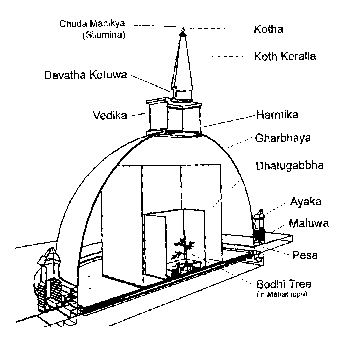 The Ruwanweli Mahathupa is unique among all others because: a ‘dona’ (One of eights parts) of the Buddha’s relics is enshrined within; the site was dedicated especially and consecrated many generations before by Arahant Mahinda; the only stupa recorded to have a Bodhi tree embodied within; the particular use of many materials not found in other stupas, such as crystal, metals; the particular and deliberate design of the base layers, and of the relic chamber; and the function of the crystal on the pinnacle as a beacon.

All dagaba / Stupa found in the world is meant to imitate a passage from the confusion of the world, through stage after stage of awakening, to a breakthrough into the ‘pure region’ of the transcendent. The dageba (Stupa) consists of six main parts.

Pinnacle (Kotha)
This symbolizes Enlightenment. This is usually a pinnacle made of metal on top of which is a precious crystal or gemstone (chudamanikya).

Parasol / Conical Spire (Kothkerella)
This symbolizes the Nine levels of the Dhamma – the 8 stages of the Path plus the Nibbhana (Navalokottara Sri Dhammaskanda). This is built on the Devatha Kotuwa. A crystal (chudamanikya) on a pinnacle made of metal is placed at the top of the spire to adorn it.

The Gods Enclosure (Devatha Kotuva)
This is a Cylindrical neck built on the ‘Hatharas Kotuwa’. Figures of deities are usually carved on the surface. The word means a place for the Gods to stay.

Square Enclosure (Hatares kotuwa)
This symbolizes the four noble truths. Relics are enshrined in this part too.

Hemispherical dome (Gharbaya)
This symbolizes the whole of the Dhamma. The hemispherical dome is constructed on the three berms. In the middle of the dagaba was built a relic chamber (Dhathu garbhaya). The Buddha's relics are enshrined there. In the centre of the Relic Chamber was placed a bo-tree made of precious metals, and an image of the Buddha round which were groups of figures representing various events in the life of the Buddha.

Octagonal foundation (Atapattama)
This symbolizes the 8 noble path. This form is found in some Stupas only. 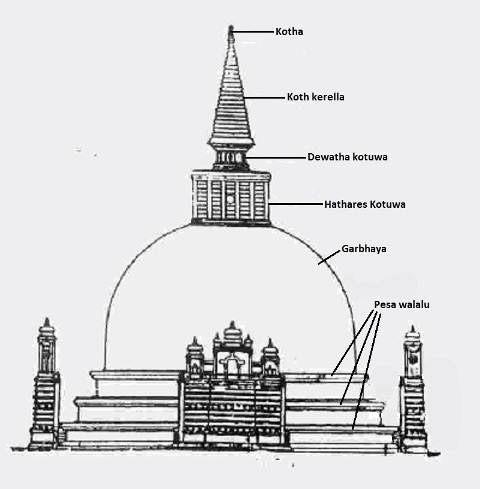 The Buddhist temple is not complete without the following:
Stupa /dageba;
the actual vihara / image house;
a bodhi maluva or platform, with or without alters;
a ‘pansala’ or priests’ residence.
The ‘bana maduva’ or preaching hall is usually separate from the vihara itself.

There are different types of Stupas

The relic stupa contain relics or remains of the Buddha, his disciples, and lay saints are interred as you have described. Other Stupas can contain other object which were used by the buddha (relics associated with Buddha). Some may be purely symbolic.

With regard to symbolisms change from country to country.

Although not described in any Tibetan text on stupa symbolism, the stupa may represent the five purified elements:

8
Why do Buddhist Stupas have various shapes?
1
Pagoda's symbolism of yogi's progress to Nirvana

8
Why do Buddhist Stupas have various shapes?
7
What is the reasoning for making a buddhist statue out of gold?
1
Buddhist Perspective on Value, Sentiment, Attraction?
2
Examples of early Buddhist art
12
Buddhist view on Art and being an Artist
0
Street art interpretation in predominantly Buddhist country