Is Maha Brahma a GOD?

In Buddhism, we can find a name called "Maha Brahma".

Is he a GOD (as per Buddha, there are no such people called GOD), or some kind of different bean?

Maha Brahma is a realm, and not “A GOD”. Any living being (including each of us) has been in all realms in this beginningless sansara. We have been at the highest (except the five pure abodes in rupa loka which can be accessed only by Anagamis or Non-Returners). One time the Buddha pointed to a bunch of ants on the ground and told bhikkhus that each of those ants had lived in a brahma loka. The sansara is that long; there is no discernible beginning. These 31 Planes of Existence is described in the Dhammacakkappavattana Sutta. It lays out the “blueprint” of Buddha Dhamma.

In the realm of Great Brahmas (Maha brahma) Buddha mentions about one Great Brahma, a deity whose delusion leads him to regard himself as the all-powerful, all-seeing creator of the universe. It is in Kevatta (Kevaddha) Sutta: To Kevatta (DN 11). Kevaddha Sutta informs one of what even a “God” does not know. Maha Brahmas, like Baka, think they’ve gone beyond anything the Buddha knows, so the Buddha has to go up to their Brahma heavens and subdue their pride, to show them that they still have more to let go of, that there is something the Buddha himself has gone beyond but they haven’t.

Dhammacakkappavattana Sutta lays out the “blueprint” of Buddha Dhamma, and in one part of it names the 6 deva realms and 15 out of 16 rupi Brahma realms. The sutta is meant to convey the way to “see” the true nature of existence with wisdom, not with the physical eye. Only a Buddha can discover the true nature, but a human can comprehend it, once explained.

In the brahma realms, all brahmas are born fully formed without the help of a mother’s womb. Theirs is an “opapatika” birth. For example when a human dies, his body becomes inert like a log, and at the very instant a fully-formed brahma is formed in the appropriate brahma world. This brahma will have sense faculties appropriate for a brahma: only eyes, ears, and a mind. These are the indriya for the new existence. These indriya can become ayatana (a factory that produces sankharas of another birth) at times depending on the activities of that brahma.

Male/female distinction is there only in the kama loka. In the brahma realms (higher 20 realms), there is no such distinction. Brahmas do not have dense physical bodies or sexual organs. One is born in either the 16 rupa loka realms or the 4 arupa loka realms (brahma realms) because one has given up all desires for bodily pleasures, including sex, because one has seen the value of niramisa sukha (and jhanic pleasures) that can be achieved by giving up bodily pleasures.

All brahma realms are “unisex“. Brahmas do not have dense bodies to experience touch, taste of foods, or smells. They have very fine bodies. A brahma “body” has only the most minute of matter that is much much smaller than an atom in modern science. This is why it is thought (erroneously) that there is no matter in arupa lokas. There is matter, but it is insignificantly small. The Buddha said that vinnana cannot exist without a pancakkhandha, and the pancakkhandha in the arupa loka has a rupa component, even though negligibly small.

Brahmas and devas can “see” humans engaging in activities (if they want to), but they do not have any liking (upadana) for such “coarse pleasures”. Their mental state is much higher, just like a human who has developed abhinna powers. They could actually be repulsed by human bodies. Just like we do not “miss out” on the activities of worms, they are not interested in human activities. It all depends on the mindset associated with the particular bhava.

The brahmas (and also devas) can “see” without the aid of light and “hear” without the having air to transmit sound waves; their “physical bodies” do not have “eyes” and “ears” like ours. Thus they can “see” and “hear” over great distances. And they can be anywhere they wish within a short time. The closest analogy of how their “vision” works is how we “see” dreams; we don’t need eyes to see dreams. Likewise the brahmas just perceive. 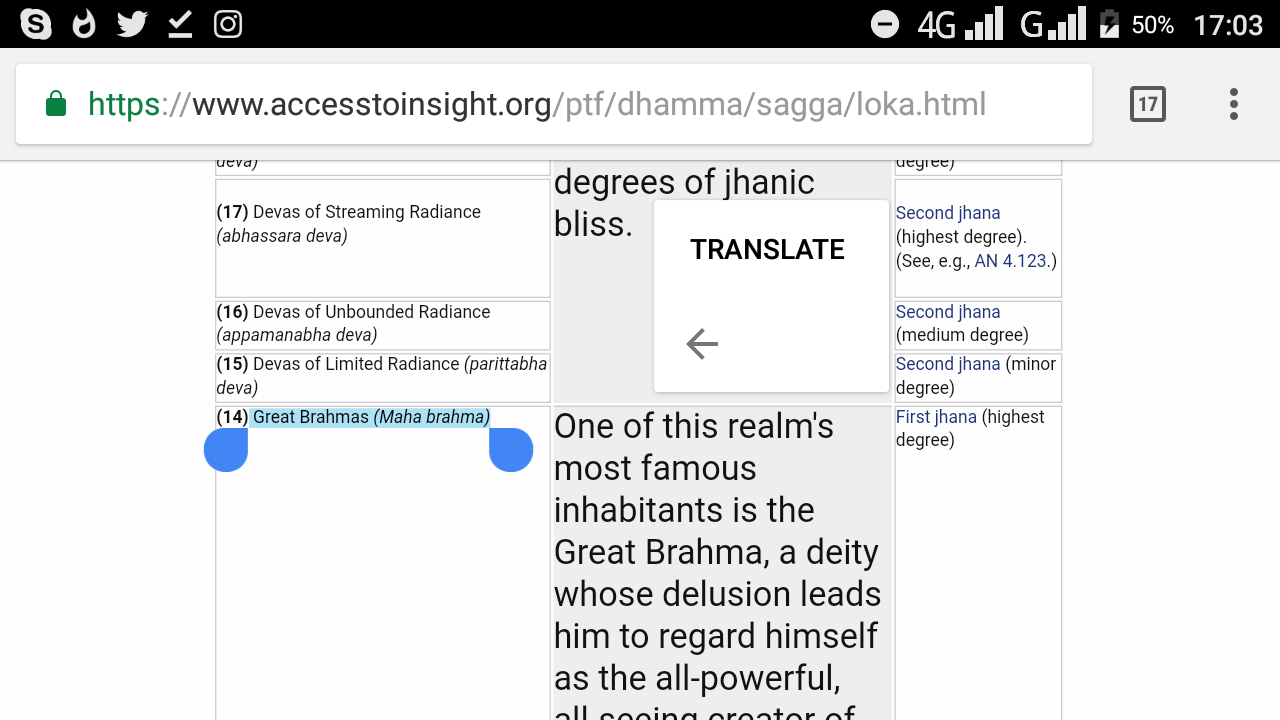 Maha Brahma is the being who exists when the universe first started expanding mistakenly thinking himself as an all-knowing, all-powerful, self-existent, eternal Creator. He seems to not know where He came from.

It seems that He is the same God spoken of in Abrahamic religions.

“Thereupon the being who re-arose there first thinks to himself: ‘I am Brahmā, the Great Brahmā, the Vanquisher, the Unvanquished, the Universal Seer, the Wielder of Power, the Lord, the Maker and Creator, the Supreme Being, the Ordainer, the Almighty, the Father of all that are and are to be. And these beings have been created by me. What is the reason? Because first I made the wish: “Oh, that other beings might come to this place!” And after I made this resolution, now these beings have come.’" (DN 1)

Through the intense practice of metta (loving-kindness) one can attain the Brahma realm (Heavenly World of the Creator).

That heavenly world lasts for such an extremely long time period it's mistaken as eternal by other teachers but eventually it disappears and comes to an end so it's not a solution to ending suffering.

Deities in the Pure Abodes, arahants, paccekabuddhas, and sammasambuddhas are superior in terms of power and knowledge to Maha Brahma.

In Iti 22 the Sammasambuddha Gautama recalls that in a past existence He himself was Maha Brahma as a result of intensely practicing metta.

Maha Brahma is only one, appears in the beginning of the universe, and has an amazing appearance.

Maha Brahma like other deities are better defined as "higher beings" rather than as gods.

He is a God-like figure but not actually all-powerful or all-knowing.

On the question of Maha Brahma, it is clear from the Numerical Discourses of the Buddha i.e. the Anguttara Nikaya (AN 10.29 English translation by Bhikkhu Bodhi), in which the Buddha says " As far, Bhikkhus, as this thousandfold world system extends, Mahabrahma there stands as the foremost". Although the Buddha acknowledged the existence of gods, he focused on the Method to Liberate oneself from this endless cycle of birth and death. In this context, cosmology took a low priority in his agenda of teaching his methodology for liberation.

There are beings who are born as Maha Brahamas in the highest realms of existence. Since their life span is extremely long and they see people are born and die, having forgotten their own prior birth (due to their long life) some of them fall into the illusion they are like the rulers, creators or supreme of the world. On a certain occasion, Buddha has spoken to such beings having noticed their thoughts.

Indeed there is Brahma. What you see, hear, touch, felt and see is actually experienced by Brahma. He is the seer behind all individual and the root of samsara. Samsara where one takes birth, grow old and dies is samsara, means the body of Brahma. But delusionally individuals in it think that they are different, do deeds as good and bad and gets the result of rebirth. But actually this whole world of men, animals, birds, maggots, reptiles are his forms, means he is the silent witness who enjoy the action they do. So, whoever talks of universe is Brahma is talking truth but when they say it's eternal is wrong. Because it changes very rapidly. Brahma, who is non-eternal, changing take the fool as eternal and non-changing. So, Brahma world is samsara of sin and virtue. Only realised one found the escape. How? Throw away that, which is not yours! Why? Because it belongs to Brahma. Body, senses, mind, feeling, counsiousness is not yours....are changing......are suffering....are the branches of pain....And the root is Brahma. So, there is path of purity to attain nirvana. Nirvana means total extinction of samsara and it's root, brahma. The path appears sudden like a shock in invidiual who detached and rightous. That light is Inner master, Hari, what buddha called as "Anatta". It's eightfold path. Why not seventh? Well, the 7th is Brahma, the root of pain. Veda stumbled onto the 7th Brahma and sang his vain glory. It's like one worship the enemy. Anitya is synonym for Brahma and Anatta is synonym for Inner master. So, conclusively self is utter illusion from individuals point of view. Because, there is two truth, one is root of suffering(Brahma) and other is way of relieving the suffering (Inner master, Guru, Hari, Anatta, highly Lord greater that brahma). Whoever found the true meaning of Anatta, receive food while begging. Why? Imagine the whole world is Brahma which is root of pain in samsara. So, whoever got awaken will use his tools? Can he pluck out the fruit from tree of Brahma and eat it while knowing it is mixed with poison? So, awakened one doesn't regard to this body and eat only extent to that which sustain their life by begging without humiliation. Why don't they disappear although know this whole world is root of pain? Because of only compassion to the living ones and he know how to deliver them. So, they live for the sake of others, do actions for the sake of others but never ever they go astray. They are like lotus amid pond and clay. Lotus is Anattta and dirty soil is Brahma. So, there is no great brahma because Brahma is not great. In fact he should devout to Inner master and clean his Sin. May all find peace!

Not the answer you're looking for? Browse other questions tagged god or ask your own question.

5
Is there a proper English word to call Brahmas?
1
Which Buddhist council included the conclusions that there is no creator-god and no day of judgment?
14
Emotional Support without God in Theravada
4
Do the gods help us if we pray to them according to Buddhism?
1
Life after death
3
Why Buddha said “There is No God” and Later “There is God”?
0
What is Sang Hyang Adhi Buddha?
3
Did the Buddha know God?
0
Buddhist Ontology/Reductionism vs Science