Is zazen practised for its own sake, or as a means to end suffering? Experts seem to say different things

It is confusing to me that what what the goal of zazen is (and is not), as proposed by various people with more or less authority on the subject, varies so greatly. Some say no goal, and others identify various goals.

This is as far as my thinking has gotten. I conclude with some verifiable examples of what the goal of zazen is said to be.

the practice of meditation, the practice of looking deeply, has the purpose of removing wrong perceptions from us
—“What is Nirvana and How Does It End Suffering?” by Thích Nhất Hạnh at MeditationPlex

there is no goal

There is no starting point nor goal, nothing to attain
–Zen Mind, Beginner’s Mind by Shunryu Suzuki

engage with reality (not to make your life better)

The real practice of Zen is to engage directly with reality, not to use it as a method to improve your health or make your life better
—“Zazen Posture” by Josho Pat Phelan at Chapel Hill Zen Center

the purpose of zazen is compassion
—“Beyond Thinking: Dogen’s Teachings on Zazen” by Norman Fischer at Upaya Zen Center

zen meditation-zazen
Share
Improve this question
edited May 30 '15 at 12:48

Actually, the answer is very simple: meditation is practiced to achieve tathata (suchness), which is a state of realization of the Third Noble Truth. Because tathata involves cessation of aversion to any "this" and of longing for any "that", its attainment requires a mindset without a goal. It would be more precise to say that no-goal is a method of meditation, but that would risk leaving some subtle shadow of goal in practitioner's mind, hence the official statement that meditation has no goal. Because Buddhism aims at liberation from (among other things) deep-lying stereotypes/assumptions and implicit conceptual boundaries it necessarily involves tricks like this. Another corollary of the above, is that it's never enough to reason about these things intellectually, one needs to take them on as actual frame of reference for them to have an experiential effect.

This point is well illustrated by Dutiya Anuruddha Sutta (AN 3.128 or 3.130 or 131 depending how you count) -- the below amateurish translation is mine but here is another one.

Then venerable Anuruddha came to venerable Shariputra and said:

-- As much as I, friend Shariputra, try and look at things with purified Heavenly Eye, try and see things with thousandfold-superhuman vision, train in confidence unmovable, in awareness undimmable, in tranquillity imperturbable, and in focused mind unscattered, still I can't "having stopped maintaining intoxication, achieve liberation of mind".

-- All these thoughts, friend Anuruddha, of the kind "I try and look at things with purified Heavenly Eye, I try and see things with thousandfold-superhuman vision" -- this is your conceit.

And the thoughts of the kind "I train in confidence unmovable, in awareness undimmable, in tranquillity imperturbable, and in focused mind unscattered" -- this is your pathologic restlessness.

And the thoughts of the kind "still I can't "having stopped maintaining intoxication, achieve liberation of mind" -- this is your remorse.

Here "the deathless aspect" (amrita-dhatu) refers to Nirvana, in this context also described as vajradhatu, "the indestructible space that accommodates everything, samsara and nirvana. Nothing can challenge this space. In spite of its clarity, or discriminating wisdom, it is still indestructible." (Chogyam Trungpa)

"see ourselves as we really are", "engage directly with reality" and "grasp enlightenment" -- all refer to the same thing. This is when "compassion" happens naturally. In order for this to happen, one has to "remove wrong perceptions", "remove all entertainment and distractions" -- which includes removing the notion of goal or attainment, hence "no starting point nor goal, nothing to attain" without any trace of "eventually".

Zen teachings can be likened to "the finger pointing at the moon." Based on my experience at Dharma Field in Minneapolis, MN. They always mention zazen and the other Zen Buddhist practices are just fingers point at the moon. It is important not to get caught by the form of zazen but to utilize the practice for your own practice. The practice methods are tools to be used to help the practitioner with their daily meditation practice. As the following image and koan help explain: 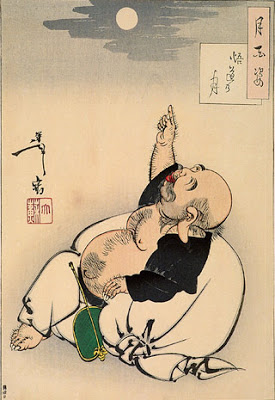 The nun Wu Jincang asked the Sixth Patriach Huineng, “I have studied the Mahaparinirvana sutra for many years, yet there are many areas i do not quite understand. Please enlighten me.”

The patriach responded, “I am illiterate. Please read out the characters to me and perhaps I will be able to explain the meaning.” Said the nun, “You cannot even recognize the characters. How are you able then to understand the meaning?”

“Truth has nothing to do with words. Truth can be likened to the bright moon in the sky. Words, in this case, can be likened to a finger. The finger can point to the moon’s location. However, the finger is not the moon. To look at the moon, it is necessary to gaze beyond the finger, right?” HappyHauiku

The seemingly inconsistent points of view on zazen are generally utilized to help the practitioner's meditation from leaning too heavily in one direction or another. It is basically a corrective process to mentally stay on the middle path, not going off one tangent or another. 1

Joshu Examines a Monk in Meditation

Joshu went to a place were a monk had retired to meditate and asked him: `What is, is what?' The monk raised his fist.

Joshu replied: `Ships cannot remain where the water is too shallow.' And he left.

A few days later Joshu went again to visit the monk and asked the same question.

The monk answered the same way.

Joshu said: `Well given, well taken, well killed, well save.' And he bowed to the monk.

Mumon's Comment: The raised fist was the same both times. Why is it Joshu did not admit the first and approved the second one? Where is the fault?

Whoever answers this knows that Joshu's tongue has no bone so he can use it freely. Yet perhaps Joshu is wrong. Or, through that monk, he may have discovered his mistake.

If anyone thinks that the one's insight exceeds the other's, he has no eyes.

Borrowed from: http://www.ibiblio.org/zen/gateless-gate/11.html I added the emphasis.

The point being that it's not one way or the other. It's both and neither.

To answer this question you shouldn't only look at the goal as stated by Zen itself, but rather an anthropological explanation of Buddhism from an outside perspective.

From that perspective Buddhism, and consequently Zen, fall under the umbrella of religious practice, which always has the aim of relieving suffering.

Ask yourself - why would someone seek out zazen if they had no aim in doing so? In other words, there must be a goal for those seeking zazen. And as in other religious seekers, typically that goal is relieving worldly problems.

Make no mistake, there is a lot of value in Zen, and in the modern era it has similarities with certain types of therapy, mainly Acceptance and Commitment Therapy. But there is a risk for practitioners to immerse themselves too deeply in the mysticism of Zen, while missing the every-day reality that it's basically a certain perspective we take on the world, which in ancient times was called 'enlightenment'.

Zazen is a practice, and like any practice we do not practice for a particular goal or end. We practice to acquire a skill. All of the products that one might point to — enlightenment, self-awareness, removal of distortions, compassion, clarity, etc — are outgrowths of that skill.

A doctor spends years in school, reading books, studying charts, dissecting cadavers, etc, not because these acts are interesting or useful in themselves, but because the skills she develops from doing so help treat injuries and diseases in the real world. Zazen is no different.

Of course, a 'skill' is a lot like an 'attitude': less a thing in itself than a relationship to the world. It's difficult to put into words.

Not the answer you're looking for? Browse other questions tagged zen meditation-zazen or ask your own question.

3
Is there anything akin to 'Jhana' in Zen Buddhism?
2
Does skillful means include meditation?
1
Escape the suffering?