How does an ālaya-vijñāna work?

And in particular, is it eternal, unchanging and like any other formulation for a soul that we might have seen, in say Christianity or Hinduism?

This particular idea, that ālaya-vijñāna is like a permanent self, is mentioned in "Confessions of a Buddhist Atheist", by Stephen Bachelor.

In no way alaya-vijnana is "eternal, unchanging". This is Buddhism after all and nobody will posit totally non-buddhistic concepts which could contradict basic teachings of Buddha. Unenlightened beings may mistakenly perceive alaya-vijnana as Soul, but they may perceive so about any skandha. (One interpretation of why skandhas are five is that it's five assumptions of Self.) Standard analogy for alaya-vijnana is violent current of a river (udakaugha), it may be perceived as solid (from a far) but it's highly changing (if looked closer). Alaya-vijnana is only remains to the end of sansara.

Currently I'm trying to read the "Stilling the Mind" by Alan Wallace. Although he tries to be detailed and didactic, it's very dense. In this book he translates and explains Dudjom Lingpa's Vajra Essence, from Dzogchen school.

If I understood correctly, he uses the expression substrate consciousness for alayavijnana, and he says that in Theravada it's called bhavanga. The five senses and the mind manifest in it. Dreams and after-death bardo also happens on alayavijnana, acording to Alan Wallace.

It isn't like a soul, but it is a continuum of consciousness. It gives the sense of continuity of time, and even after sleeping it allows us to feel this continuity.

And it isn't a self, which is disclaimed by vipassana. But it could be said that it is a self devoid of color, sound, smell, taste, shape or concepts. So it's not a common self.

I don't know if alayavijnana is permanent, but it lasts more than the phenomena of the five senses, the mind and the dreams. It seems that alayavijnana is the consciousness that enable the manifestation of phenomena, or that perceives them manifesting. 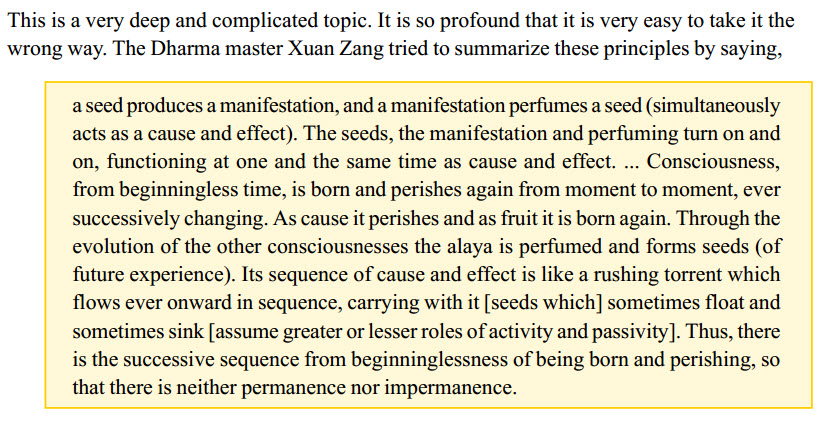 The Buddha himself said that he didn't want to talk about the alaya because people would confuse it for a permanent self. So the answer to your 2nd question is a clear and emphatic NO.

Let's honor his advice and not philosophize about it too much either because understanding and transforming the alaya (and the rest of the consciousness skandha) is the work of a bodhisattva who has mastered the jhanas and already attained Arhatship, something we are not at.

On the other hand... (from Wikipedia):

Thus we can see that 'Vijñāna' represents the simple reaction or response of the sense organs when they come in contact with external objects. This is the uppermost or superficial aspect or layer of the 'Vijñāna-skandha'. 'Manas' represents the aspect of its mental functioning, thinking, reasoning, conceiving ideas, etc. 'Citta' which is here called 'Ālayavijñāna', represents the deepest, finest and subtlest aspect or layer of the Aggregate of consciousness. It contains all the traces or impressions of the past actions and all good and bad future possibilities.[37]

Anyway, go to page 217 of How to Measure and Deepen Your Spiritual Realization for the clearest account on Alaya that currently exists--at least one that I trust--since we are in the territory of Mind-Only after all... The book is a little expensive but worth it.

Below is a dump of that sub-chapter.

As a major concept used in the Chinese Zen (Ch'an) tradition, the term alayavijnana also appears in the Platform Sutra in conjunction with the arising and functioning of one's self-nature. The alayavijnana functioning as right-wrong view is a governing principle over the 18 dhatus in three categories of manovijnana, manas and alayavijnana, functioning as wise or unwise reflection for the development of prajna (wisdpom). In terms of stress associated with wrong view of the six sensed objects, the six sense faculty bases and the six sense consciousnesses, the conditioned dispositions (mental, bodily and verbal) are presented to consciousness. As right-wrong views constitute wisdom of transcendence: the wise development of a whole (think yin-yang -Tao) which in correcting a wrong view suddenly leaves the mind free from it's object and it's sense base empty. The right-wrong construction requires the proper development of prajna to recognize the object and its comprehension as right view in the application of the four noble truths.
The term prajna is absent from the Lanka in which the alayavijnana first appears. Now, in the Platform Sutra, eliminating the deluded mind of self, ill- will in mind - and mental greed, in relation to the sensed object- all thought arises in relation and reference to the manovijnana, manas and alayavijnana, In terms of the four noble truths of suffering, the cause, its ending and the path leading to liberation; the Dhrmakaya, Nirminakaya and Sambhobakaya of the PS are capable of functioning as a recepticle of impressions within the physical body since everything dependently arisen is contained in one's own nature. The Dharmakaya, in the PS is accessible through the special feeling of in-out breathing. This methodology of cultivation leads to direct seeing that self nature is without error, in meditation and undisturbed.
Therefore the Platform Sutra's interpretation of the nature and function of the Alayavijnana is a clarification and reformulation of the Lanka's use of the alayavijnana for which no linguistic signs of words of letters are sacrificed on the alter of discrimination. The Buddha's message is not the elimination of discrimination by negating the referent of words, but to show that all words and phenomena are dependently arisen and dependently ceased because they only have provisional use due to their impermanence, unsatisfactoriness and no-self.

1
Did anyone equate the tathagatagarbha with the past?

2
Soul that splits in seven parts
9
How does Buddhism explain consciousness if there is no self?
0
Is there any volition or will that I can manage or control?
5
Does the Doctrine of No Soul mean there is nothing permanent to continue?
1
Is this concept of Non-self correct?
3
How do Buddhists reconcile "Anatta" with Buddha supporting the existence of the Self in the Mahayana Mahaparininirvana Sutra?
1
How our body/soul is composition of five elements?
3
How does rebirth fit with the fact that everything is impermanent?
0
Does Yogacara and its Alayavijnana fail compared to a Permanent Self?
4
A question about DN 23 and existence of soul