What is a refuge tree?

My understanding of a refuge tree is a visual representation of a lineage of a particular school of Buddhism. From Wikipedia

For instance I practice with the Triratna Buddhist community and we have our own refuge tree (shown below). At the bottom is Sangharakshita winding its way to his teachers (e.g. Dhardo Rimpoche) and up to more historical figures (Hakuin, Milarepa) and into the mythic (Amitabha, Ratnasambhava) up to the Buddhas past present and future (Shaykamuni, Dipankara, Maitreya). 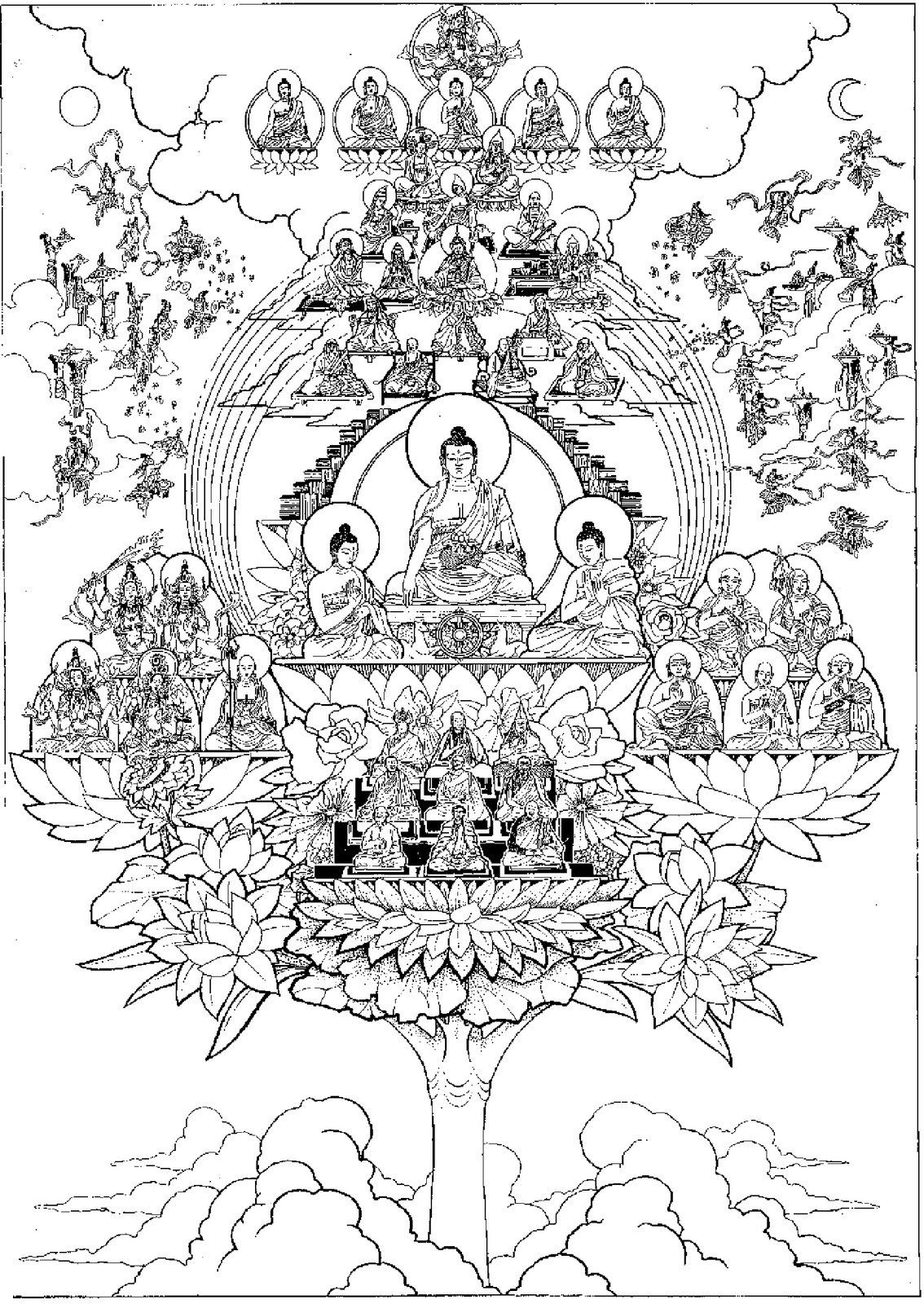 We study it to find inspiration and guidance in other teachers and other times. Because the movement is electic it means something to us to study a Zen figure (Hakuin) and then a Tibetean (Milarepa) and draw out the underlying themes. More pragmatically and politically the Triratna Community has been criticised for lacking a proper lineage so we (over)compensate by having a refuge tree that we study and refer back to.

Refuge tree is a visual representation of the objects of refuge. All the Buddhist schools take refuge in Three Jewels (Buddha, Dharma and Sangha) but in Mahayana and Vajrayana practitioners also take refuge in the teacher - Lama, who in fact unites Three Roots - Blessing (Lama), Methods (Yidams) and Protection (Protectors).

Let me illustrate the above information with the Refuge Tree of Karma Kagyu lineage shown below. In the middle we have a blue Buddha (Dorje Chang) who represents the Lama, the main refuge in the lineage. To his right, in a circle, we have 10 Buddhas (of ten directions) which represent the first Jewel - Buddha. Behind the tree on top we see a rectangular building which represents the second Jewel - Dharma (Buddha's teachings). To the left of Dorje Chang there is a circle of Bodhisattvas with Chenrezig in the middle - they represent Sangha, the third Jewel. As for the Three Roots, we have the whole Karma Kagyu lineage above Dorje Chang which represents the blessing of the Lamas. Right below him there are Yidams and below the Yidams there are Protectors (wrathful forms surrounded by flames). If you're interested in details, see this interactive map. 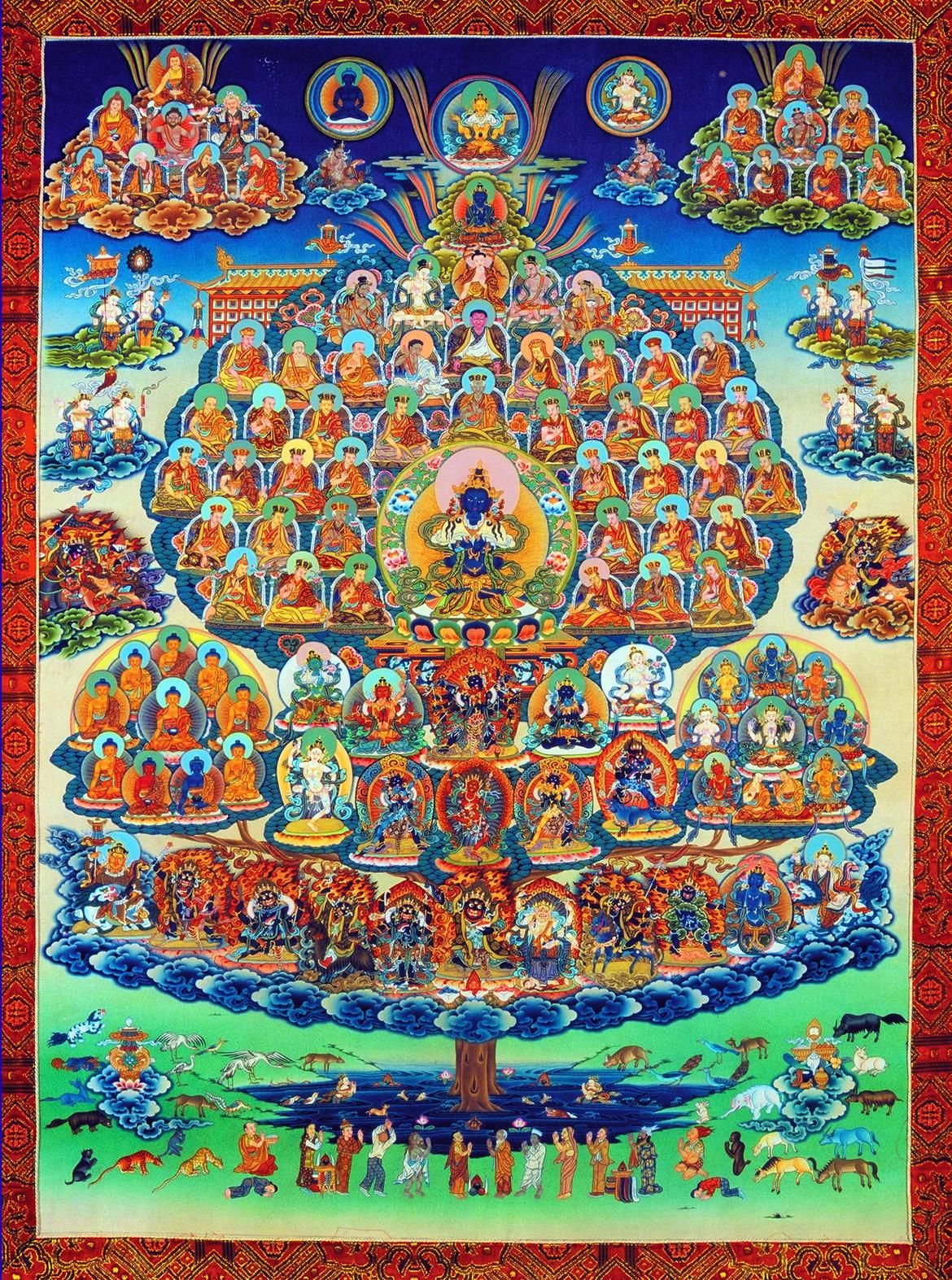 In Vajrayana the Refuge Tree is used in the first part of the preliminary practices (Ngöndro) - prostrations. One is visualizing the tree in front of them and is performing the actual physical prostrations in front of it while repeating the Refuge texts.

Not the answer you're looking for? Browse other questions tagged mahayana vajrayana refuge or ask your own question.

4
Which Buddha do Buddhists take refuge in?
12
What is the proper understanding of “taking refuge” in Buddhism?
9
Following the Dhamma without taking refuge
8
Is going for refuge central to all Buddhist traditions?
2
Refuge in the modern vipassanā movement (the concept/practice, not the ceremony/commitment)
4
History of refuge in the 3 jewels
2
May I Still Take Refuge In the Triple Gem?
1
Is it possible to Take Refuge in the Three Jewels, but still learn spiritual wisdom from teachers in other religions?
2
Without formal refuge?