I have only started meditating for only 2-3 weeks. But now I cannot seem to meditate properly. Whenever I sit for meditation, there are several problems, like increased salivation, feeling of being pressed in the chest and like not getting breath after a few minutes, which to go away I have to take a deep breath. The same just process repeats itself for the whole 20 minutes I sit for meditation. I sit in the burmese position with pillow under my butt, on the bed.

I would be glad if someone please helped me.

Whenever I sit for meditation, there are several problems, like increased salivation, feeling of being pressed in the chest and like not getting breath after a few minutes...

As a physiotherapist I would like to briefly explain the anatomy of poor posture related to meditation practice.

First of all, you want to sit on a firm surface, not a soft surface like a bed. Thats due to the anatomical structure of the spine. The spine has an "S"-curved shape meaning that biomechanically it allows to act like a spring when loaded.

When sitting on a soft surface your muscles need to work much harder in keeping your spine erect. Failing to do so results in slumping. Slumping here means that the posterior hip and spine muscles contract, thereby limiting the working space available for the diaphragm. You see the diaphragm needs to be able to move up and down in order for the lungs to expand. When one is slumped over one is actively putting restriction on the air passage by decreasing the thoracic cavity.

That is why you are feeling like the chest is being compressed and air moves slower and restricted. An analogy would be having a water hose and then bending the hose so that the water flow gets restricted.

When sitting in an upright posture with spine erect the diaphragm can move up and down unhindered thereby increasing ventilation and air passage.

My advice would be to change your sitting posture from a soft surface onto a firm surface.

When sitting you want to:

Regarding sitting options there are various options to try out. See illustration below.

The insight meditational way to deal with e.g. increased salivation, uncomfortable sensations in the body would be to take them as an object, note them and let them go.

If for example increased salivation is happening, take the feeling of the saliva touching the inner mouth parts and note that a couple of times and then let it go.

If an intention to swallow arises, note that intention. That is the "nama" part of reality. The saliva arising is the "rupa" part. Rupa arises and nama knows it. Nama knows rupa. Rupa does not know nama.

If you need further help feel free to contact me. Email is on profile page.

When you sit, your back should be naturally straight, in the manner as when you are standing. 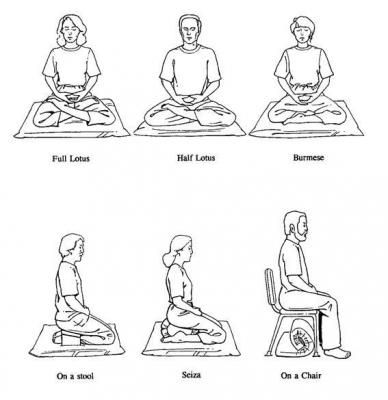 If you have a teacher best is to consult him / her.

Generally, numerous issues like these do pop up at the beginning, which you have to deal with objectively. Some times through meditation you notice problems which were there but you did not notice beforehand, because your awareness was weak. Whatever happens this should not make you worried or anxious in which case you will be creating negativity. You should try to be equanimous noting its impermanence and dependently arisen or causality arisen nature.

If partly this is due to issues with your posture the picture in the other answer might be of help.

Not the answer you're looking for? Browse other questions tagged vipassana meditation-hindrances or ask your own question.