Getting rid of long discourses from Tipitaka, what could be true intention?

I have heard that people mention long discourses (Diga Nikaya) are not authentic Buddha's discourses (not Buddha's words). The fact that makes me surprised much more is that they say "in Diga Nikaya, Brahmajala Sutta was not discoursed by Buddha".

After I have studied Brahmajala Sutta; such bold words and complete coverage on Indian Brahman and Brahmin religious concepts as well as all modern religious concepts, I thought those kind of very complete specifications of 62 concepts/beliefs could only be named and discoursed origins of them by only Sammasambuddha or someone like Sammasambuddha (who has very complete Panna without any rival can claim or find loophole/falsehood or incompleteness in his discourses).

To make a blanket statement that the "DN was not spoken by the Buddha" would not be wise. Obviously, there are certain suttas in the DN that reasonably conform with what the Buddha taught in other suttas as verifiable truth.

It must be noted the core principle of the Buddha-Dhamma is that is it 'verifiable', namely: sanditthiko akaliko ehipassiko opanayiko paccattam veditabbo vinnuhi. Any sutta that departs from this core principle is open to question.

It must always be kept in mind that pre-Buddhist Brahmanism was very different to Buddhism however, over time, both Buddhism & Hinduism changed so much that they became largely indistinguishable resulting in Buddhism becoming extinct in India. Many commentators have attributed this to Buddhist efforts to proselytize the religion & the DN has been deemed (for example, by Bhikkhu Sujato; by Bhikkhu Bodhi, page 31 of his SN) to be the major vehicle of proselytization. In other words, it was corrupted Buddhism designed to seduce Brahmans. It is widely acknowledged that:

Recent scholarship suggests that a distinguishing trait of the Digha Nikaya may be that it was "intended for the purpose of propaganda, to attract converts to the new religion." 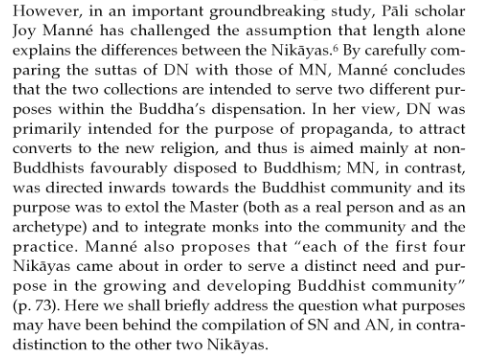 If the DN was composed for the purpose of propaganda, to attract converts to the new religion, then it is unlikely the Buddha spoke for this purpose, since the Buddha was only interested in converting those with little dust in their eyes (MN 26) and keeping his doctrine pure (AN 2.23, AN 2.25, MN 22, MN 38, etc).

This being said, the Brahmajala Sutta might possibly contain words or doctrines that are not found in any other sutta, such as saññīvādā, antānantikā, amarā­vikkhe­pikā, etc. I think only a competent scholar could make a reasonable hypothesis. If so, it is open to question.

The paranoia or defensiveness gets even worse, with the morality sections referring to "Gotama" himself abstaining from attending unsuitable shows, games and recreation, etc, to the point of sounding very childish. At least I would expect the Buddha to refer to his Vinaya abstaining from these worldly behaviours rather than himself personally.

If one wishes to critique the authenticity of the DN, others suttas are best chosen.

To conclude & to answer the question, the reason for dismissing DN suttas such as the Maha Nidana Sutta is because they promote wrong understanding of Dependent origination, which is the core dhamma of Buddhism.

The Sutta Pitaka contains five collections, or Nikayas. The first of the five - Digha Nikaya (long discourses) consists of 34 suttas in 3 books. These range in length from 5 to 47 pages. Many suttas are readily accessible to a newcomer and many are quite deep and detailed.

There’s a passage in the very first sutta in the Digha Nikaya, the Brahmajala Sutta, listing all the different kinds of wrong views that people can develop. Of the 62 grounds for wrong views, not every wrong view comes from people simply thinking things out without having practiced meditation. A lot of wrong views come from people who meditate and gain some insights or intuitive knowledge, but the knowledge isn’t as complete as they thought it was. So they jump to the wrong conclusions.

Digha Nikaya, as much as the other four Nikayas, gives us the teaching of the Four Noble Truths which is the core of the Dhamma realized by the Tathagata. The Buddha, in the Maha Parinibbana Sutta of the Digha Nikaya, announced that it is because of the ignorance of the Four Noble Truths that we have had to continue so long, wandering on this weary path of Samsara. Sadly, in the present day, in translating from Pali to English, even Professors like Rhys Davids make mistakes. In translating from Pali to English one must be equally proficient in both, and should have attained the path. No one who has not attained the path, can assume to be right about the Dhamma.

Understanding is Panna - it is the third stage, after seeing (Dassana, yatha bhutha nana, seeing things as they actually are), and path entry. The characteristic of the Dhamma is that it is leading onwards (Opanayiko). Thus, full understanding (Parinna) is by the arahat. Unfortunately, that is beyond a householder, or a lay person, in this life.

In Samyutta Nikaya Sutta 38.16, it is said that even after persons renounce and become monks, it is difficult to find one who practises in accordance with the Dhamma. But Digha Nikaya Sutta 16 says that if monks were to live the holy life perfectly according to Dhamma-Vinaya, the world would not lack for Arahants. Now to practise the Dhamma perfectly, one has to be perfectly knowledgeable about the Supreme Buddha's instructions in the Suttas.

The Suttas of the Digha-Nikaya are a valuable source for life in ancient India in general. Several of its Suttas also provide information on the biography of the Buddha that is not found elsewhere in the canon. For example in Digha Nikáya Sutta 14 & DN 32, the Supreme Buddha stated that six Supreme Buddhas appeared over 91 world-cycles. The seven Buddhas, including "our" Supreme Buddha, mentioned in DN 14 & DN 32: Vipassi, Sikhi, Vessabhu, Kakusandha, Konagamana, Kassapa, and Gotama.

Then in the Sakkapanha Sutta in Digha Nikaya we get to know that Sakra, the Lord of the Deva world of the Thirty Three had reached fruition of the Path. Such information is not found in the other suttas.

In a Digha Nikaya sutta called the Janavasabha [DN. II. 216 f.], Brahma Sanankumara addresses the devas of the Tavatimsa world and tell them of the seven contributory factors as ‘well proclaimed by the Buddha which lead to the establishment of samma-samadhi. They are referred to as satta samadhi-parikkhara. Professor Rhys Davids in his translation has misunderstood the word pahoti. He takes it to mean suffices to. He writes… Right intention suffices to maintain right views for Samma-ditthissa samma-samkappo pahoti. Maurice Walshe gets it correct as "From right view arises right thought".

Not the answer you're looking for? Browse other questions tagged tipitaka or ask your own question.

6
"Mystics" in buddhism? ("There is nothing hidden in my teaching" and the like)
3
What are timeframe were pali canons, included commentaries, done, especially Mahavihara-Theravada?