significance of buddhism in this age of terrorism tyrannies and insolence

i would like to know the answer to the question from your point of view: what is the significance of buddhism in this age of terrorism, tyrannies and insolence?

It's all about money and power

In modern world , almost everything happens according to money and power. So people and governments try to have money and power . Some people try to get those by force. We call them terrorists . And there are terrorist governments as well. There is a huge competition nowadays to be the richest or the most powerful.

Let's ask why those things happen. There is one simple answer. Greed. It is one of the worst qualities one can have , greed drives people crazy. Never ending desires , anger , jealousy and suffering , everything above is happening because of greed .

So according to Buddhism, we have to get rid of greed , then only we will be able to create a better world than this. We have to make ourselves better first, if everyone thought it that way , the whole community will be better eventually, we can't change government, we can't change the world, only way we can change the way world works is to change ourselves. To do that Buddhism will help a lot. Everyone should follow the path to nirvana. If we all did this , those cruelty, terrorism and rudeness will fade away.

The significance of Buddhism is the same as it ever was. The modern age is nothing special unless we believe it is and belief is the problem according to the Buddha's teaching.

We have beliefs, opinions, religions and assumptions that we cling to and they causes borders, wars and terrorism.

Buddhism ideally teaches us the difference between our assumptions and beliefs and What is arising in one's present moment experience.

Buddhists have beliefs of course but the idea is to understand the difference of what is and what is conceptual. This understanding is a big part of what will lead one to less suffering.The more we understand, the less greed, anger, ignorance and suffering we have until we are liberated.

Buddhism teaches that the purest truth is found in each one's individual experience and not so much in a system of government.

Buddhism has within it a vision for a perfect world. However Buddhism has never had the agenda to create a perfect world because Buddhism comprehends the majority of the world is immersed in ignorance & the world is ruled by 'gods' (the tyrants) that hoodwink the people to finance via taxation, vote for, fight & die in their wars (as shown in the top left triangle of the picture). 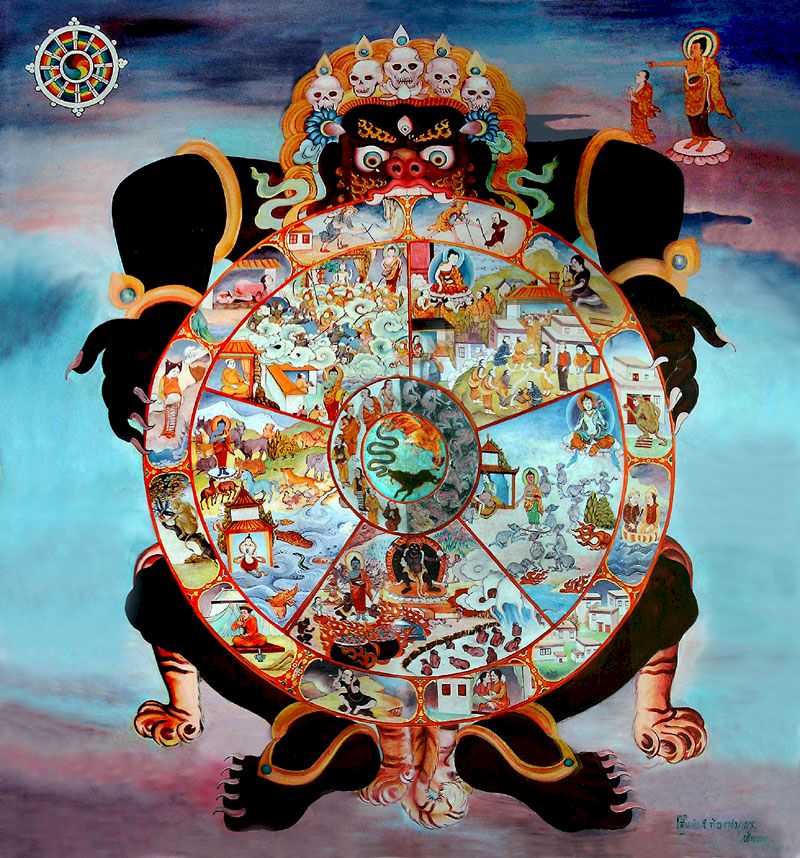 For example, most Western people cannot even see that it is their own governments & their political allies that are financing & arming the terrorists for economic & political aims. 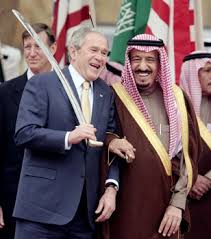 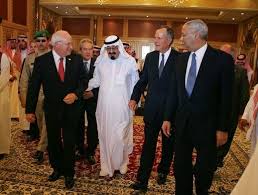 170. One who looks upon the world as a bubble and a mirage, him the King of Death sees not.

171. Come! Behold this world, which is like a decorated royal chariot. Here fools flounder, but the wise have no attachment to it

58. Upon a heap of rubbish in the road-side ditch blooms a lotus, fragrant and pleasing.

59. Even so, on the rubbish heap of blinded mortals the disciple of the Supremely Enlightened One shines resplendent in wisdom.

For example, only last week did President Obama waive the US Arms Export Act so weapons of murder & death could be freely sold to terrorists fighting for US goals in Syria. 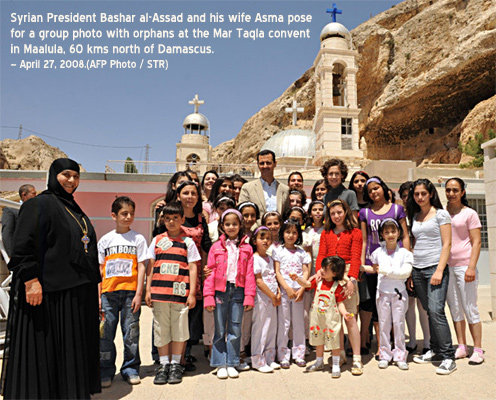 SUBJECT: Presidential Determination and Waiver Pursuant to Section 2249a of Title 10, United States Code, and Sections 40 and 40A of the Arms Export Control Act to Support U.S. Special Operations to Combat Terrorism in Syria

I hereby: determine that the transaction, encompassing the provision of defense articles and services to foreign forces, irregular forces, groups, or individuals engaged in supporting or facilitating ongoing U.S. military operations to counter terrorism in Syria, is essential to the national security interests of the United States. 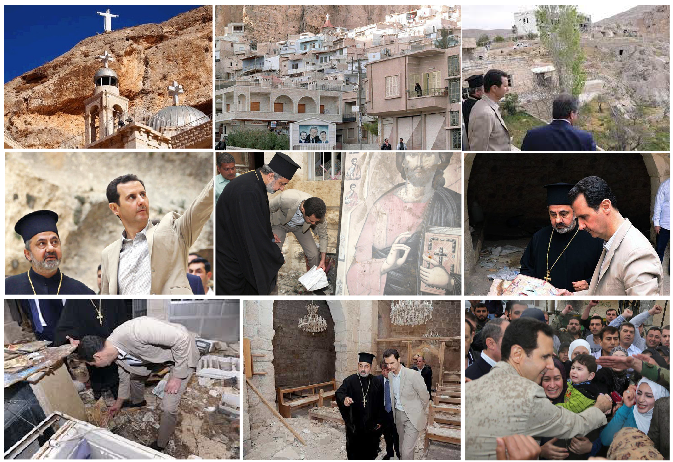 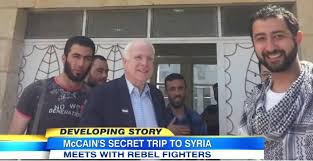 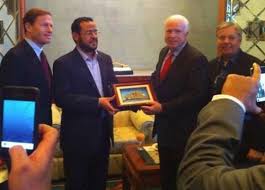 Al Qaeda’s Abdelhakim Belhadj poses with US Senator John McCain. McCain’s lobbying would play a part in securing Al Qaeda and its affiliates with sufficient arms to overthrow the secular government of Muammar Qaddafi in Libya. Soon after, these terrorists and their weapons would find their way to Syria via NATO-member Turkey. 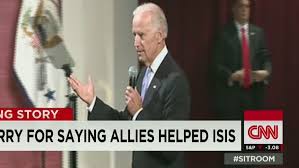 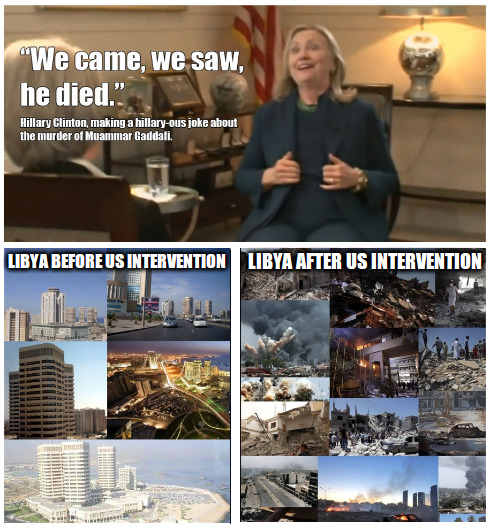 There are even Western Buddhist monks (here) that greive when the war maker Hilary Clinton loses the election in favour of Donald Trump who at least said America should not be supporting wars in Syria & the Middle East. One of the rationales of this monk was Mr Trump did not support abortion for women.

It was with feelings of shock and dismay that early this morning I woke up to learn that Donald Trump had been elected president of the United States. 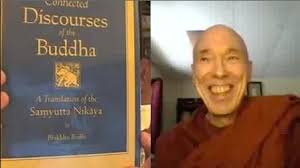 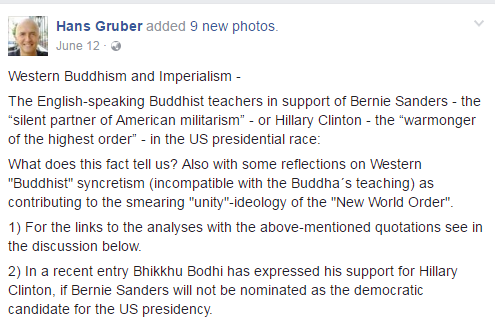 When people are so easily fooled like this, including by Western Buddhist monks, change cannot occur & danger cannot be escaped.

Since as Buddhists we cannot make war, we must prepare for the worst & learn to let go.

The nuclear age form of Dhamma prepares all people to face the events of our nuclear era: events of war and events of peace. It also prepares us for the general events in the daily lives of human beings. In the case of war, if nuclear war occurs, what sort of Dhamma will enable the mind to face such horrible dangers and punishment? With peace, what knowledge is needed regarding this situation in which there is still this nuclear age kind of peace?

Nowadays, what are people doing that we call this "The Nuclear Age"? They can go up to the moon, circle it, land on it, and come back to earth. They can send vehicles to look at, explore, and go beyond the planets.

Obviously, this kind of progress leads to strange and powerful results. In Dhamma language, we call these results atimahantaramana (ati, extreme; mahanta, great; aramana, things known or felt, things which strike or make contact). They are sense objects that powerfully strike the mind in the form of dukkha (suffering). Why don't we take a happier view of the situation? Because that's impossible. Material progress that leads people to be infatuated with sensual pleasure and stimulation blocks the way to peace. Even though we may be enjoying some delicious sensual pleasures now, such sense experiences support and increase defilement (kilesa), especially the defilement of selfishness. With selfishness reaching extreme levels, there's no peace in sight. Therefore, we can see only these undesirable things that we have created.

In this nuclear age, such dangers can come at any time. Although we may have parents and children, it's as if we had no one. Then who will help us? What will help? I think that Dhamma will help us, which means the Buddha will help us.

Realize aniccam, dukkham and anatta (impermanence, unsatisfactoriness, and not-self). Realize sunnata (voidness, selflessness), tathata (thusness), and then idappaccayata (conditionality). Penetrate to these realizations with every exhalation and inhalation - that's the most important issue. That's what's best, having Dhamma that keeps one calm and quiet in all circumstances.

Samatha-Vipassana for the Nuclear Age

Not the answer you're looking for? Browse other questions tagged ethics modern-world or ask your own question.

36
How to explain what Buddhism is?
5
A Buddhist Point of View of Virtual Reality
4
Are all non-monastic ways of life wrong livelihood?
0
Consider then the magician and the philosopher
5
Can a Buddhist use antibacterial soap?
0
Do you think that this Laughing Buddha Restaurant sign is a disrespect?
2
Scared of growing old – living in the moment
2
What happens to one in a locked in syndrome?
2
How are expectations and responsibilities seen in Buddhism?
2
Conscience and Buddhism