New to the site, new to Buddhism

New to the idea of getting external help, too. I have several questions about this path after read this Q&A:

What attracted me to buddhism was

Some of my greater achievements:

These questions are general, mine are more precise. Please be open minded about my questions, they are very real.

That's all for the moment. Oh, I forgot, the most important one: About this little part of me you could read, is there a school recommendation?

Some quick answers, which I may add to later:

The Buddha denounces individual expression and passion in favor of being grounded in peace and happiness.

How to get to Nirvana?

Follow the Buddha's Eightfold Path to cultivate an ability to let go of everything you want to pull to you(greed, clinging, desire) and develop acceptance of reality you normally push away(anger, aversion).

Yin Yang is a Taoism concept but it was remixed into Mahayana Buddhism.

He is appropriately ordinary and fully enlightened. He developed special teachings that arn't seen in any other religions like Anatta and the 12 links of Dependant Origination.

A few comments on Dhammadhatu's excellent answer, for now mostly pertaining to "Is Buddhism a religion?" and "Does Buddhism answer important questions?

First, it is correct to say that Buddhism is not a religion. However, I believe that

Second, when Dhammadhatu says "Buddhism answers important questions", the word "important" must be exceedingly carefully used and interpreted. Questions regarding any "soul" and "afterlife" are mostly regarded as unimportant. Also, questions regarding the origin of the universe and the end of the universe, origin of man, etc. are almost totally dismissed. For greater detail, see this. In my not-so-humble opinion this is the most important part of Buddhism and gets short shrift in the literature; wiki: parable of the poisoned arrow

EDIT: I retract my statement that Buddhism is not a religion, because I was using a wrong definition of religion. See here; https://area51.meta.stackexchange.com/questions/8236/isnt-buddhism-a-religion. I do not insist that it is or is not a religion. Probably this is an "unimportant question"! =P

P.S. I will add things to this answer soon ,

I will give my answer to just one of your questions: Why should someone follow the Buddha?

From my own experience, both reading many of the talks that he gave, and putting them into practice, I've noticed that what he focuses on are the basics of human psychology that were visible to him then, and are still visible to us now. He not only notices what we do, and explains why we do it, but he gives us tools to use to see all this for ourselves, and to put the solutions he provides into practice, and to see for ourselves whether they work or not (they do).

You have many questions. For my knowledge the most important question out of all those why one should follow Buddha and his teachings? I would like to give detailed answer for that.

As a buddhist according to our master's supreme mandane he understood and told us that we are traveling birth after birth infinite period of time that we cannot count in this "samsara". it is like a circle and even lord buddha not able to find the one's beginning of the life. See this below picture. We called this is journey of "Samsara" 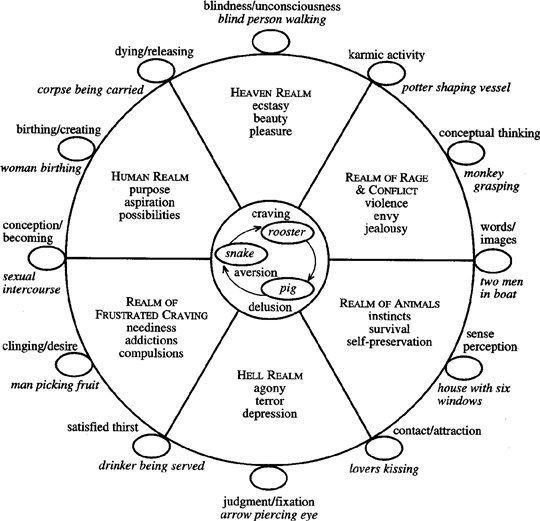 We believe 31 levels in this universe under this sun and moon.

To get better understand of their ages refer below chart.

So we keep on traveling as a result[Vipaka] of our past present future actions[Karma]. There is no creator. What we are experiencing now is mainly due to your previous result or vipaka of your karma or action. There were few more things that might be resulting into. Those are

Now you have an idea basically 95% of our present due to our Karmic actions. Lord Buddha before enlightened [we called "Bodhisathwa"] as bodhisathwa met 512,027 Buddha's and traveled "Suwisi Asankya Kalpalakshya" to experienced this world and find the path to overcome this continuous rebirth and stop birth again and again. For well understanding of those periods read this article: Explanation of time periods

Buddha gave one example for kalpa: take 1 Yoduna = 16 Miles depth height and width tank and filled with Mustard. Then every 100 year one seed removed from the tank. Lord Buddha said one day tank will be finished but kalpa not finished. Maha Kalpa includes 4 Anthak Kalpas One Antha kalpa includes 256 kalpas.

Now you have basic idea of the traveling of this Samsara through the 31 levels with their time periods. Lord buddha said the hells are our main house. For Example If a family has 7 members including mother and father. Once those 5 members married and have 5 separate houses we used to visit our main house and regularly and have family gathering. Similarly because of bad karmas we used to got hells than visiting heavens.

People those who searching for salvation of these sufferings agonies should follow the buddhism. We have three sufferings:

Within the Buddhist sutras, duḥkha is divided in three categorie:

I will answer your other questions one by one day by day. Was this article helpful for you. If you want to learn buddhism visit here:- "Loving Kindness" Step by Step Guidance

14
Overwhelming states of being reached through meditation
3
What is the Buddhist point of view of the Law of Attraction?
3
What is New Age Buddhism?
7
New to metta meditation
4
What were the Buddha's meditation methods and practices during his pre-enlightenment wandering years in India?
2
What, if anything, do the texts say about habits versus mindulfness?
7
Need some pointers about the current phase
1
The concept of being the part of the universe
1
What did Buddha taught about space time?
1
Discovering Pureland Faith