Why this hair style on statues of the Buddha?

http://9gag.com/gag/arOnzn5 says that the Buddha's "hair" on this statue represents snails. 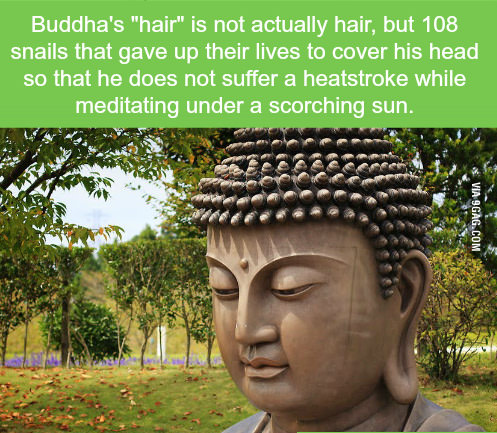 I thought Buddha shave his head like all his disciples. And there is a claim that his hair are actually snails.

The question isn't just whether the hair represent the snails, but what do the 108 snails present. Recall that Buddhism heavily utilize symbolism to convey it's message. It doesn't mean that the historical Buddha actually had snails on his head.

The number 108 represents the 108 mental afflictions.

In traditional Buddhist thought, people are said to have 108 afflictions or klesas. There are six senses (sight, sound, smell, taste, touch, and consciousness) multiplied by three reactions (positive, negative, or indifference) making 18 "feelings." Each of these feelings can be either "attached to pleasure or detached from pleasure" making 36 "passions", each of which may be manifested in the past, present, or future.

In this sense the snails and their hard shells essentially represents mindful concentration which guards against all these afflictions.

Buddha didn't shave his hair like a monk, as a teacher doesn't wear uniform when students do, in school.

Buddha has deep blue hair, 绀青色 similar to ultramarine, his hair naturally curled clockwise, harmonized with the spinning of the universal energy. In fact the Buddha statues in ancient China are made with strict proportions, with support from the Sutras.

If the Buddha statues show signs that we ordinary human beings don't have, it's not necessary an imagination of the people at that time. For Buddha is an enlightened being, when one's self-cultivation has reached a higher level, the body will change, too, it must, else this is not a true advancement but only an intellectual achievement. The structure of a body is the reflection of thought, thus a facial feature, hair colour, skin texture, limbs etc., all are not randomly by chance, it has it's intrinsic value.

This blog entry, The Buddha's Hair, says no: not snails.

Also, you're probably right about his shaving his head:

the Tipitaka offers no authentic information about the Buddha’s hair other than to say that it was black (kalakesa) and that he cut it off when he renounced the world to become a monk (M.I,163). Although it is not mentioned anywhere in the Tipitaka, we can safely assume that the Buddha shaved his head like all other monks. Depictions of him with hair, is an iconographical convention without historical basis.

It theorizes that it's an attempt to depict one of the "32 Signs of a Great Man", which it calls "a rather strange idea introduced into Buddhism at a later period", one of the signs being that "the Great Man’s hair was black and curled upwards and to the right".

Buddha cut his hair himself when he left his palace for retreat. In some India and Buddhism countries, it is not respectful that touching one's head if the one who touched is younger in age or less respectful (lower in rank) than the one who was touched. So logically no one should touch Buddha's head for shaving since Buddha is superior to all living beings. That is why there was no barber who did Buddha's hair after his retreat and Buddha-hood. So Buddha cut his hair by himself once when his monk life began, definitely not possible to shave himself. So there some hair left on the head and are all in clockwise spiral shape and rest till Buddha's Mahaprinivana.

The above statement is very logical but there are no reference or citation in pali canon as far as I read. Buddha definitely was not totally bald like monks and hair relic are supporting facts about it though it has not been proved scientifically.

From an unverified source I read that those are snakes protecting his head from heat when he was exerting himself for enlightment.

Buddha had hair before he achieved nirvana. After that he shaved his head . Because buddha's father asked him not to be like that, because that was shameful to their family status , because in india all the lower class people and beggars used to shave the head . But Buddha didn't listen to what his father said and kept the head shaved. And he is like any other human being , no such differences as those stories say .

Once the Buddha was going somewhere by foot at stopped his journey when it 's dark and went inside a small public cottage nearby to spend the night. There was this person in this cottage who also was on his way to see Buddha. His name was "pukkusathi" as much as I remember, so Buddha asked about him, and he said he was going to see the Buddha, so this implies the Buddha was same as any other monk in appearance.

He might had curly hair before he achieved nirvana , I think its best to not to talk about Buddha s appearances because , only thing Buddha asked from humans was to follow the path to nirvana.

So the hair is like that on statues because , There are statues of other monks as well , so people have to identify who is Buddha to worship those statues, so the artists who made those had to make it that way to make it different from other statues.

The most logical answer is that Buddha was black, ie Negroid, which makes perfect sense as Asia's aboriginal population are black people.

Avoiding the most logical answer to the question is underpinned by some kind subconscious racialist notion that people have to evolve to develop straight hair and fair skin before they become capable of spiritual enlightenment.

It is similar to the questions which ask why Krishna is black or dark-skinned, as he is described as a curly-haired, black-skinned man with red eyes. I doubt the question about Buddha would be asked if he had the wavy or straight hair typical of contemporary South Asians or of Krishna if his skin was white.

The first pic below is of a Semang man taken in 1906. Check the Wikipedia page. 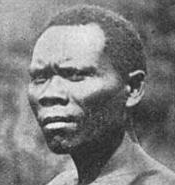 This one below is a Jarawa woman from the Andaman Islands. The Jarawa are notable because they all exhibit the widow's peak often seen in Buddha images. 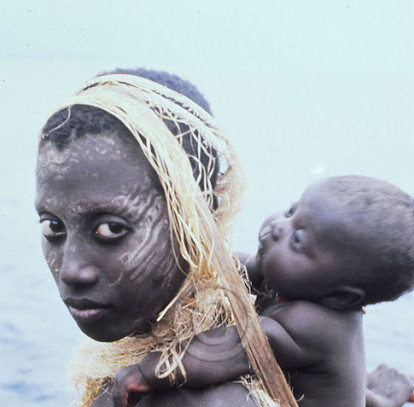 Compare her hair and widow's peak to the Buddha icon below. 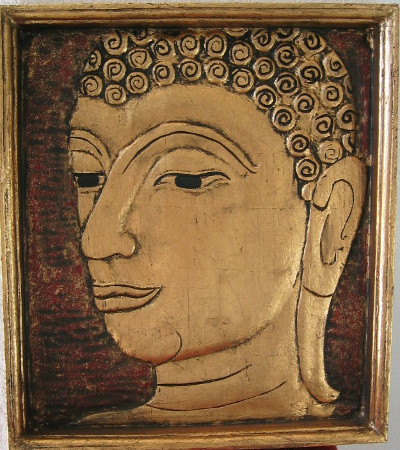 The Jarawa man displays the hair better. You can see the widow's peak as well if you look well enough. 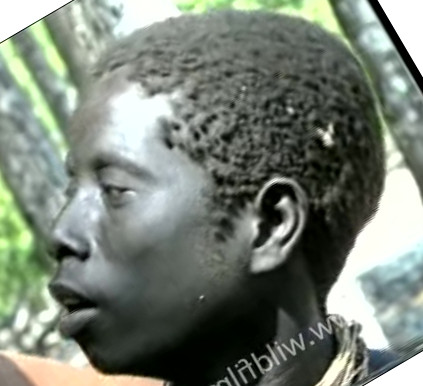 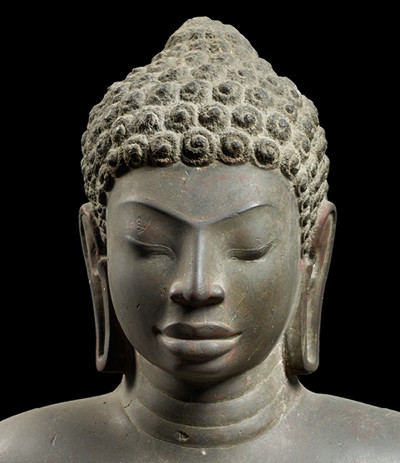 Buddha's ears are most likely the result of heavy earrings worn for long time, or plugs in the ear lobes. In effect the Buddha image is basically one of the African woman below with the ear lobe plugs removed, with added widow's peak. 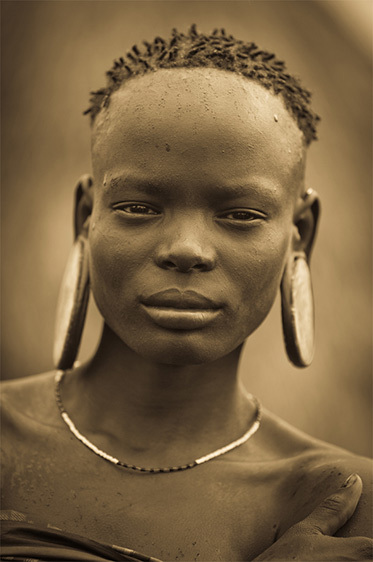 He had curly hair, more sure where al this snale ish came from. As a person who has curly hair, I have this style just by accident

It’s dreadlocked. Dreadlocks in Vedic Scripture is called Jaata which means twisted locks of hair. Short or long, usually worn by holy men, which the Buddha was.

Not the answer you're looking for? Browse other questions tagged buddha iconography or ask your own question.

0
Did the Buddha really have snails on his head?
1
Statues I can't find anything about

4
Halo on the Buddha
2
Why is there Hindu gods in this decorated wall in the Vihara of Bhaja
5
Iconography in Buddhism - from the Greeks? And why isn't the Buddha bald?
2
What is the significance of Reclining Buddha Statue in Laos compared to other countries in Asia?
1
How comes that praising oneself and blame others is unskillful but the teacher of it does?
1
Beards or no beards
1
Questions about buying a Buddha statue
2
What are the texts which say or imply what the Buddha looked like?
1
Is the Buddha capable of making mistakes?
2
Did The Buddha promise to send a Paracelete, or Holy Spirit?