As we all have heard the Buddha spent 7 weeks after his enlightenment in different places and engaging in different activities.

But in the Mahavagga Pali (the first half) in Vinaya Pitakaya states that the Buddha only spent 4 weeks after enlightenment. And after that week only the Sahampati Brhama invited him to teach Dhamma to the world. (In the 7 weeks tradition this happened in the 7th week)

1st Week - Under the Bodhi tree

Also in the Sutra Pitakaya I found the following sutras as well.

This sutra talks about the second week. Ud1.4

This sutra talks about the third week Ud2.1

4th week is anyways stated in the Mahavagga Pali.

But in the Pujawaliya written by Ven. Mayurapada Parivenadhipathi Buddhaputhra suggests that the Buddha spent 7 weeks after the enlightnment in different places and engaging in different activities. Sath Sathiya - 7 Weeks

If Vinaya Pitakaya is the one that is to be accepted (Vinaya and Dhamma are the Teachers after me - Buddha) then did the Pujawaliya writer exaggerate the 4 weeks into 7 weeks? Even in that book i didn't find any references to the Tripitakaya (Pali Canon) as well.

There was a possibility that Buddha stayed in Uruvela forest more than four(4) weeks. It was mentioned in Mahavagga Pali, section 6, end of paragraph 10 but it did not specify exactly 3 weeks more or places of additional weeks. The last line of that paragraph here 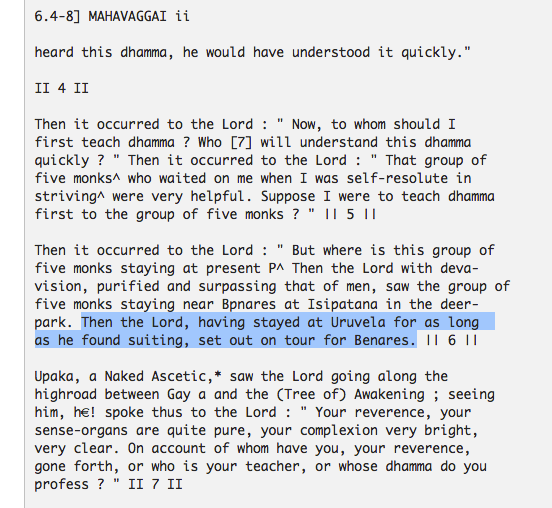 did mention Buddha stayed more than four(4) weeks probably made the best timing for five foremost monks for first discourse.

If found about this more details in any sutta, I'll update here.