Why is Kwan Yin riding a sea turtle?

And maybe to save two related questions, why does Samantabhadra ride an elephant and Majursri ride a lion?

I was meditating with Kwan Yin statute and that was the main distraction, I had no idea why Kwan Yin is on a sea turtle. 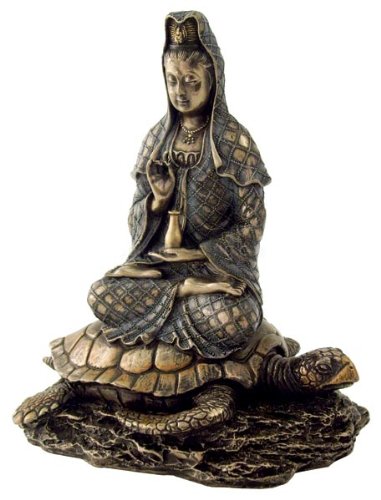 Okay, I did my own research and here is what I've come up with so far. Interestingly, the artist is making a reference to this Pali suttra:

Other Bodhisattvas and Buddhas are often described as riding a particular animal.

Samantabhadra is explicitly described as riding an elephant in his sutra. Samantabhadra's elephant appears to be another awe inspiring flourish. (At least from my reading of the excerpt of Samantabhadra Meditation Sūtra in Wikipedia.

Wikipedia says of Manjusri and his lion: "Mañjuśrī is often depicted as riding on a blue lion, or sitting on the skin of a lion. This represents the use of wisdom to tame the mind, which is compared to riding or subduing a ferocious lion." Wikipedia doesn't explain why the lions, but elsewhere it's suggested that lions were sort a family symbol of the Sakyas, or it's just a reference to the pali sutra about "The lions Roar", ref: http://www.accesstoinsight.org/lib/authors/nanamoli/wheel390.html

The turtle/tortoise is a symbol of long life, health and medicine, as is the amrita nectar in the vase Kwan Yin is carrying. Kwan Yin herself symbolizes mercy, the moon, and the cooling waters of Dharma. I would think this is a prayer for long life, but also is a symbol of righteousness and compassionate living that will give you the causes for a long life to be able to practice Dharma, have better rebirths as well as ultimate enlightenment.

These are parts of later concepts and cultural development. To understand true Buddhism you have to try to develop understanding in the original Suttas and then put them to practice. This has little relevance to Buddhists than it being part of a cultural significance.

Higher understanding will come through your practice. Practice of the Dhamma and self realisation is the main aspect of Buddhism. So it would be best to set aside some of the question you might have for a while and than later revisit them through deeper knowledge you would have gained through meditation. As for the above these are cultural and later theological developments which have not weighting in the core practice and also some what difficult to answer in a definite way. So these kind of questions should be left aside for a while.

Not the answer you're looking for? Browse other questions tagged mahayana iconography kwan-yin or ask your own question.

6
Does Kwan Yin hold a place in Theravada Buddhism?
0
Do beings without conscious experiences have buddha nature
5
Shariputra and a bodhisattva losing bodhicitta
7
Is there a legendary biography of Avalokitesvara/Kwan-Yin/Chenrezig?
2
Why is there Hindu gods in this decorated wall in the Vihara of Bhaja
2
The Nine Devices
7
Why is the Heart Sutra so important in Mahayana Buddhism?
0
Why does Guan Yin ride a dragon?
0
What kind of meat Guan yin believer are allowed to eat?
5
What is the Buddhist view in Socratic questioning?