Explain this Theravada Wheel of Life?

Wikipedia's Bhavacakra (Within the Theravada tradition) article includes this picture of the wheel: 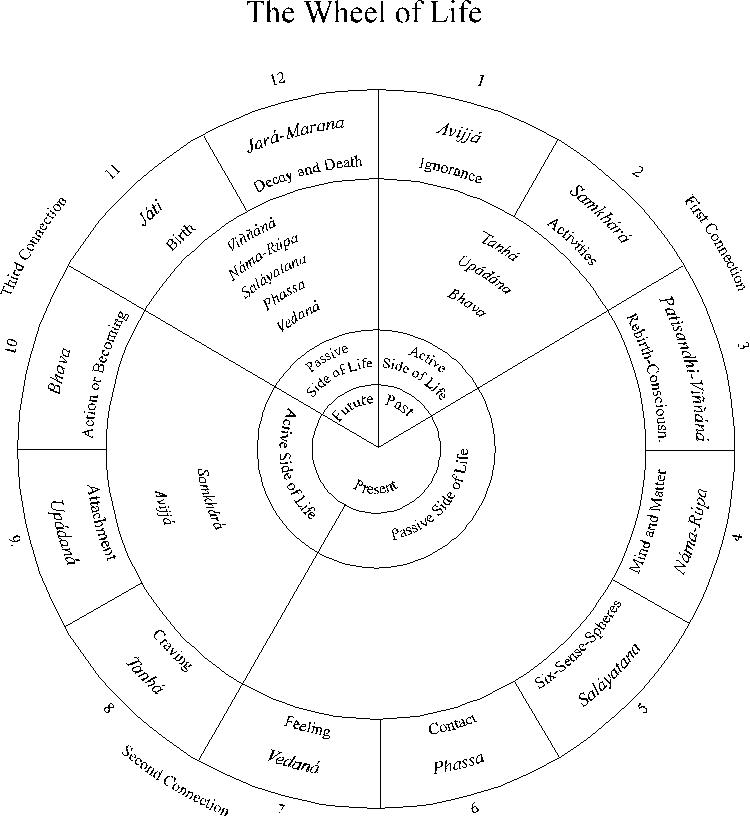 From inner to outer, it has four rings:

Craving, attachment in the present lead to becoming and fabrication due to ignorance. Ignorance is included and if it is not present there is no craving and clinging to feelings hence no fabrication.

What is subjected to birth decay and death (in the future) is a being composed of the 5 aggregates due to fabrication and ignorance in the present.

Craving, clinging in the past due to ignorance hence leading to becoming and fabrication creates the rebirth, mind and matter, 6 sense bases, contact and feeling in the present.

It's not to be looked at ring by ring but slice by slice so that the components in the inner rings can be combined with those in the outer to complete the picture. According to the Pali exegetical tradition, Dependent Orginination can be looked at in 2 ways (ref: "Connected Discourses" - NidanaSamyutta - Bhikkhu Bodhi):

The third ring appears to be stating: (a) the five aggregates are 'passive' or 'neutral' (per the Khandha Sutta, which describes neutral/mere/pure aggregates versus defiled aggregates subjected to clinging) & (b) it is the activity of ignorance, sankhara, craving, attachment & becoming that actively keep the 'wheel of life' spinning.

It is also based on the premise than 'sankhara' refers to 'volitional formations' (rather than the kaya, vaci & citta sankhara as described in MN 44).

It also appears to infer the 3rd to 7th links are not 'activated' or 'disturbed' by ignorance.

Not the answer you're looking for? Browse other questions tagged theravada nidanas wheel-of-life or ask your own question.

2
The Buddha and the Cycle of Life
4
What does it mean when something has "no self-nature"?
2
How can an arahant still perceive without ignorance?

6
Who are the Buddhas on the Wheel of Life?
9
How compatible are (Theravada) Buddhism and the Western life?
5
In the wheel of life, how can death be a condition for ignorance?
4
Explain consciousness (viññāna) to non-Buddhists
3
At which point after conception does life begin?
4
How in buddhistic terms one can explain life evolution?
1
Life after death
3
What is the role of karma in the wheel of becoming?
2
Latent tendencies, memories of this life and brain damage, dementia
2
Have I invented this statsitic on Theravada enlightenment?