Can somebody explain me this Kalachakra print? 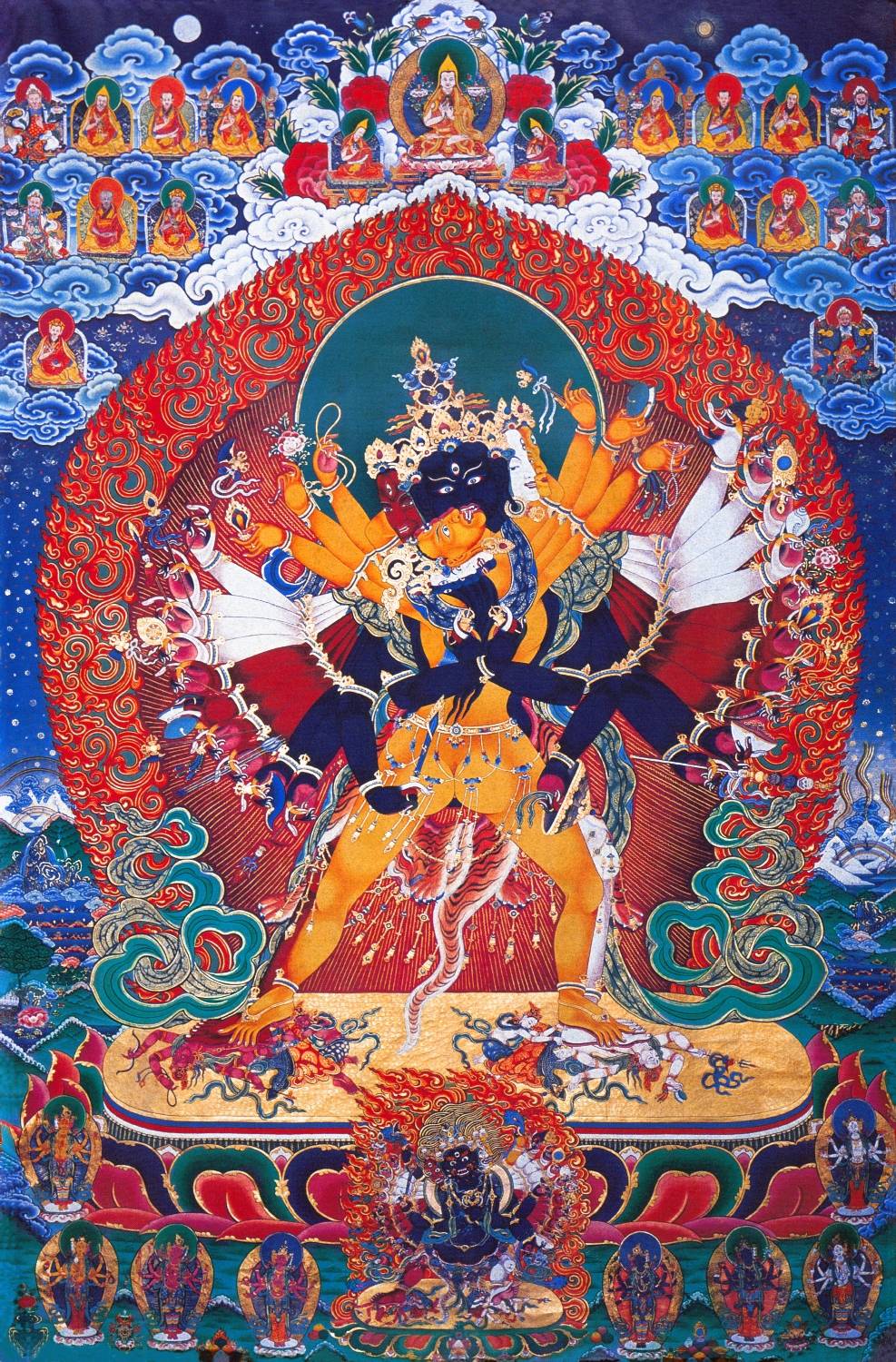 Can someone explain each part of this image? Not only the part in the middle, but also the figures all around.

This is what I have been able to determine. It does not answer all of the symbolism or identify all objects from this particular image, but it is a good start.

"...Shri Kalachakra shining forth with stainless light rays of five [colours], with a body blue in colour. Having three necks the central is blue, right red and left white. The main face is black and fierce with bared teeth. The right face is red and desirous. The back face is yellow and in samadhi. The left face is white and very peaceful. Each face has three eyes.

The hair is tied in a tuft [along with] a vishvavajra, crescent moon, and Vajrasattva as a crown, a vajra jewel, vajra earrings, vajra necklace, vajra bracelets, vajra belt, vajra anklets, vajra scarf, vajra mala, and a loose tiger skin skirt.

The first [two] shoulders on the right and left are blue, second red, third white, for a [total] of six [pairs] of shoulders, twelve upper arms and twenty-four hands. The first four [right and left] are black, second four red, third four white. The thumbs of all the hands are yellow, index finger white, middle finger red, ring finger black, and little finger green. The first knuckle is black, second red, third white. All of the fingers are beautiful and radiant.

The four white [hands hold] a wheel, spear, stick and a battle axe.

The first four black left [hands] hold a vajra bell, shield, katvanga and a skullcup filled with blood. The four red [hold] a bow, vajra lasso, jewel and a white lotus. The four white [hold] a conch, mirror, vajra chain and the four-faced head of Brahma adorned with lotus [flowers].

Above a moon, sun and rahu, standing in a very playful manner, the right red leg is extended atop red Kamadeva having one face and four hands, holding five flower arrows, a bow, lasso and a hook. Under the left white leg is Rudra, white with one face, three eyes and four arms, holding a trident, damaru drum, skullcup and a katvanga. The demon [consorts] Rati and Uma in a woeful [manner] hold the soles [of Kalachakra's feet].

Vishvamata, yellow in colour, embraces [Kalachakra] from the front. The faces, from the right are yellow, white, blue and red, each with three eyes. There are eight arms. The [first] right hands hold a curved knife, hook, a rattling damaru and bead mala. The left [hands hold] a skullcup, lasso, white lotus with eight petals and a jewel. Vajrasattva [appears] as a crown. Adorned with the five mudras. The left leg is extended - standing together with the Bhagavan."

Semi-wrathful in appearance, blue in colour, he has four faces, twenty-four hands and two legs. The main face is blue, right red, left white and the back face is yellow. Each has three eyes and an open mouth with slightly bared fangs. The first set of eight hands are blue in colour, second (middle) red and third (upper) yellow. The first pair of hands hold a vajra and bell crossed at the heart embracing the consort. The remaining right hands hold a sword, curved knife, trident, three arrows, vajra hook, damaru drum, hammer, wheel, spear, club and axe. The left hands hold a shield, katvanga staff, skullcup, bow, lasso, jewel, lotus, conch shell, mirror, vajra chains and the four-faced yellow head of Brahma. The Lord wears a long green scarf and a tiger skin as a lower garment. The consort, Vishvamata, is yellow, with four faces and eight hands. They are both adorned with crowns, necklaces, earrings, bracelets and various ornaments. The right leg of the Lord is straight and red, standing atop the figure of red Kamadeva. The left is bent and white, standing atop white Rudra. Above the layered discs of a white moon, red sun and dark blue Rahu (eclipse) they stand on a multi-coloured lotus blossom seat wreathed by the circular orange rays of pristine awareness fire.

At the top center is the primordial buddha Vajradhara, blue, with one face and two hands holding a vajra and bell at the heart. At each side are two kings of Shambhala wearing long garments and elaborate headdresses. Slightly below are two lamas wearing orange and red monastic robes. Two celestial figures, white in colour, soar against the dark blue sky.

At the left side is Sahaja Heruka Kalachakra, blue, with one face and two hands holding a vajra and bell embracing the consort. Vishvamata, yellow, holds a curved knife and skullcup. At the right is the tutelary deity Mahamaya, blue, with four faces and four hands holding a skullcup and katvanga staff and in the second pair a bow and arrow. The consort, Buddha Dakini, is light blue in colour, with one face and four hands holding the same objects as the Lord. Adorned with wrathful vestments, above a corpse, sun disc and pink lotus flower they stand in a dancing posture against an orb of red wisdom fire.

At the bottom center is the special protector for the Kalachakra cycle of Tantras, Vajra Vega (Tib.: dor je shug, Eng.: Vajra Strength). Very wrathful, blue in colour, with four faces, twenty-six hands and two legs he displays the same colours as Kalachakra. At the left is the tutelary deity form of Vajrapani, wrathful, blue, with one face and two hands holding an upraised vajra in the right and a bell in the left. Embracing the consort, green, they stand surrounded by fire. At the right is Hayagriva, red, with one face and two hands holding a stick and lasso.

The Kalachakra Mandala belongs to the non-dual anuttarayoga tantra practiced to a greater or lesser degree by all schools of Tibetan Buddhism. The concept of 'time' is used as the special metaphor to symbolize the process of transformation from mundane existence to complete enlightenment. From amongst the numerous lineages to enter Tibet the Rwa and Dro are the most famous. The Sakya school maintains seven distinct lineages of transmission. (See Guhyasamaja and Yogambara from the same set).

Not the answer you're looking for? Browse other questions tagged tantra or ask your own question.

2
What is this picture?

0
How do taboo acts work in tantra if people don't see the acts as taboo?
1
How similar or different is Tantric Buddhism from Vijnana Bhairava of Kashmir Shaivism?
5
Vajra Posture vs Lotus Posture -- the same or male vs female?
5
P─üramit─üy─üna and Tantray─üna
1
What is the logic behind visualization meditation
2
Why did Tsongkhapa list guru devotion first in his Lamrim while Atisha did not?
1
Why does Lama Atisha say those "observing pure conduct" shouldn't take (some) Tantric initiations?
1
What is meant by "secret" in the Guhyagarbha tantra?
1
What is the mandala of the ground?