What is the reason for attributing Lord Buddha's statues to days the of week? 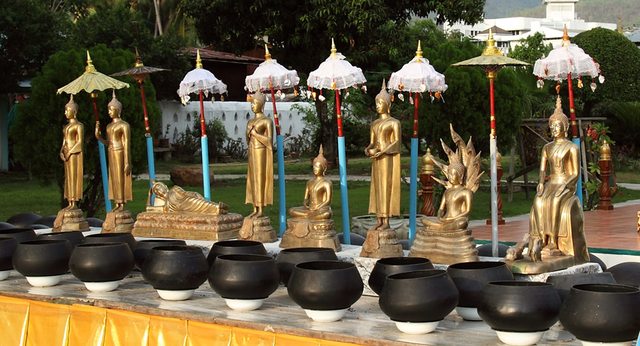 Visiting Buddhist temples, I often notice several statues of Lord Buddha. As far as I understand, they represent different Boddhisattvas. However, these statues are often attributed to different days of the week.

I tried to ask Buddhist people why this is so, and they have answered me that this is because each Boddhisattva has had some important event in their life (and in Lord Buddha's life as well), and that event has occurred on a corresponding day of week. But I still can not figure out why these events have never clashed and occurred precisely on different days of week.

How can it be? In other words, why have two or more events not happened on the same day of the week? Can it be that such attribution only has metaphoric sense?

Bytebuster, as a fellow Bangkokian I’m happy to try to answer this question!

This arrangement of images in various postures according to the days of the week is a Thai Buddhist practice, and it doesn’t seem to be very old, dating from the early Bangkok Period (post 1780s).

Let’s consider them from an artistic perspective first. According to Jean Boisselier:

The gestures and attitudes of a Buddha image permit identification of a particular moment in the Buddha’s career, even when there is no other narrative context for the figure. They are fully intelligible only to Buddhist worshippers or to those with adequate knowledge of the main events in the Buddha’s life. [...] It should be emphasized here that the frequently employed term mudrā has no real meaning except in the context of Mahāyāna, where each mudrā is, in the strictest sense, the mark of a particular Jina and thus a means of differentiating the Buddhas who, by nature, are all alike. The mudrās do not suffice to represent all the great miracles, and in the Theravāda – especially in the iconography of Thailand – the term mudrā is not used.

So each posture is meant to show an event in the historical Buddha’s lifetime, they do not identify different bodhisattvas. Rāma III, a king who ruled from roughly 1825 to 1850, had a list of 40 postures compiled which became the standard for Thai art. Artists during earlier dynasties sometimes innovated new postures, an example being the graceful “walking Buddhas” of the Sukhothai period (13-15th centuries). Besides a posture for each day, there are postures assigned to the twelve months and the twelve years under the Thai calendar (a cycle similar to the Chinese year of the horse, tiger etc.) While these monthly and yearly postures are not as well known, you might find them represented in temple art if you looked.

Sunday – Gazing at the bodhi tree (standing, with hands crossed over the thighs)

Monday – Restraining the kinsmen (standing, left hand down and right hand raised, palm open as if repelling something)

Tuesday – Reclining (on right side with head on hand). This is also interpreted as “asking Rahu to return the sun and moon which he has swallowed” – maybe a more astrological reading?

Wednesday morning – Carrying the alms bowl (standing, holding the bowl with both hands)

Wednesday afternoon – In the Pālileyyaka Forest (sitting as if on a chair, with hands on knees, right hand palm upward). Here a monkey and an elephant are offering food, the Buddha having retreated to the forest to escape a quarrel among his followers.

Thursday – Meditating (seated with folded legs, both hands in lap with palms upward)

Friday – Reflecting (standing, with hands crossed over the breast)

Saturday – Meditating, sheltered by the nāga Mucalinda. The Palelai Forest Buddha may appear on this day rather than Wednesday, it seems.

Note that some very common and meaningful postures, like the abhayamudra or subduing Māra, seated with right hand touching the ground, are not part of this set.

It’s true that these day-images are mainly for laypeople, and it may be frowned upon for monks to occupy themselves with something you might regard as superstition. Often when the images are arranged in a row with candles in front, people pay respect to each one in turn by pouring oil on the candles, rather than focusing on their day only. There are always more prominent images (and murals) in the assembly hall in any case. More generally, we shouldn’t be tempted to think of Thai Buddhists as solely concerned with protective magic and astrology. King Mongkut, who succeeded Rāma III, had been a monk for over 20 years. As king, he founded the Thammayut order partly because he wanted the sangha to concentrate on textual study rather than magical practices.

Finally, let me point out that Burma has something similar to this. The Buddha images at each day’s station (arrayed around the central stupa) don’t vary, but there are different animals for each (a tiger for Monday and so on). Take a look at the wiki page for the Shwedagon Pagoda for details, as well as a picture of Barack Obama “pouring water over the shoulder of the Friday Buddha”! For the Burmese, the day of your birth also can influence the name you are given, one example being the 1950s prime minister U Nu, whose memoir was entitled “Saturday’s Son”.

Note: The quote here is from Jean Boisselier, The Heritage of Thai Sculpture (Asia Books 1975) p. 202. For information in Thai, look for titles like พระพุทธรูปปางต่างๆ. ปาง (paang) is the Thai word for posture here. In English there is K. Matics, Gestures of the Buddha.

The link between Buddha figures and days of the week is the same as the link between astronomy and astrology. Basically one has to do with observation and the other with interpretation and seeking good luck.

Are local practices of veneration and good luck seeking a part of Buddhism? Ask local people and they will say so. A part of Buddhist doctrine, no, not really. But both are entwined in living Buddhist cultures.

Not the answer you're looking for? Browse other questions tagged art temples or ask your own question.

7
What is the reasoning for making a buddhist statue out of gold?
6
What is the symbol sometimes depicted on images of the Buddha which looks like a swastika?
5
What is the meaning of the lotus?
5
Should Buddhists use statues with an imagined likeness of the Buddha for veneration?
2
What is the link between calligraphy and Zen?
6
What are the rotating cylinders in monastries, and why are they there?
2
What is Buddhism "for" (in favor of)?
3
What is a Buddhist ceremony or service called, and what day of the week is it likely to be?
1
What are the cylinders in front of the Buddha statue at Nanzō-in Temple, Japan?
4
What are the karmic consequences of writing horror / fantasy fiction?