This question is about these images: 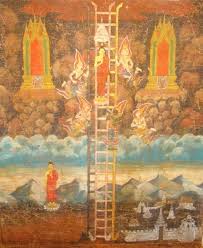 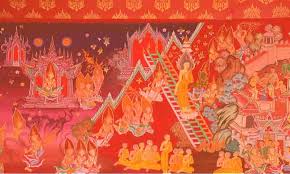 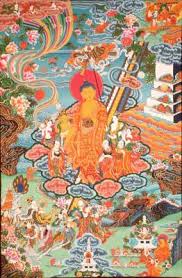 One of those pictures is shown on this page: Lhabab Duchen – the Day Buddha Descended from Tushita Heavens:

This article from Bhutan Journals describes the iconography of the Buddha Shakyamuni Descending from Tushita Heavens to the Earth.

A version of this story is told/included in the Dhammapada-aṭṭhakathā (verse 181):

On return from the Tavatimsa deva world, the Buddha uttered Verse (181) of this book at Sankassanagara, in reply to Thera Sariputta's words of welcome.

There's a more detailed version of this story somewhere else (I don't know where), for example Wikipedia's Lhabab Duchen article includes details about a "triple ladder" (shown in all the pictures):

He was exhorted by his follower and representative Maudgalyayana to return, and after a long debate and under a Full Moon agreed to return. He returned to earth a week later by a special triple ladder prepared by Viswakarma, the god of machines. This event is considered to be one of the eight great deeds of the Buddha.

Not the answer you're looking for? Browse other questions tagged the-buddha reference-request iconography or ask your own question.

5
Did the Buddha discourage antropomorphic representations of himself?
2
Buddhism about the Big Bang and Science in general
5
Has lord Buddha ever told something like this?
1
Miracles from Lord Buddha vs messages from Gods?
2
Alternative to lying?
7
Where can I find a reference for someone becoming a sotapanna through meditation?
1
Understanding compassion fatigue from a buddhist point of view
0
Looking for a reference about the significance of The Buddha being a teacher