The terror tragedy in France in Buddhist light

How can the horrible and tragic events in France be seen from a Buddhist perspective? Can the global situation with fanatical terrorism be analyzed in terms of the Buddhist theory of human mind? Can we as the global society do anything to heal the divide?

I'm sorry I'm posting this 100% opinion-based question. Normally, questions about current events are considered off-topic and would be closed. But I feel that we as Buddhists and as humans can't be silent, can't ignore this tragedy and pretend that nothing happened. Please share your thoughts and opinions.

My deepest condolences to everyone affected by the tragedy. My best thoughts are with you.

Today they are still using the heavy black border around the headline which they reserve for grave calamity. 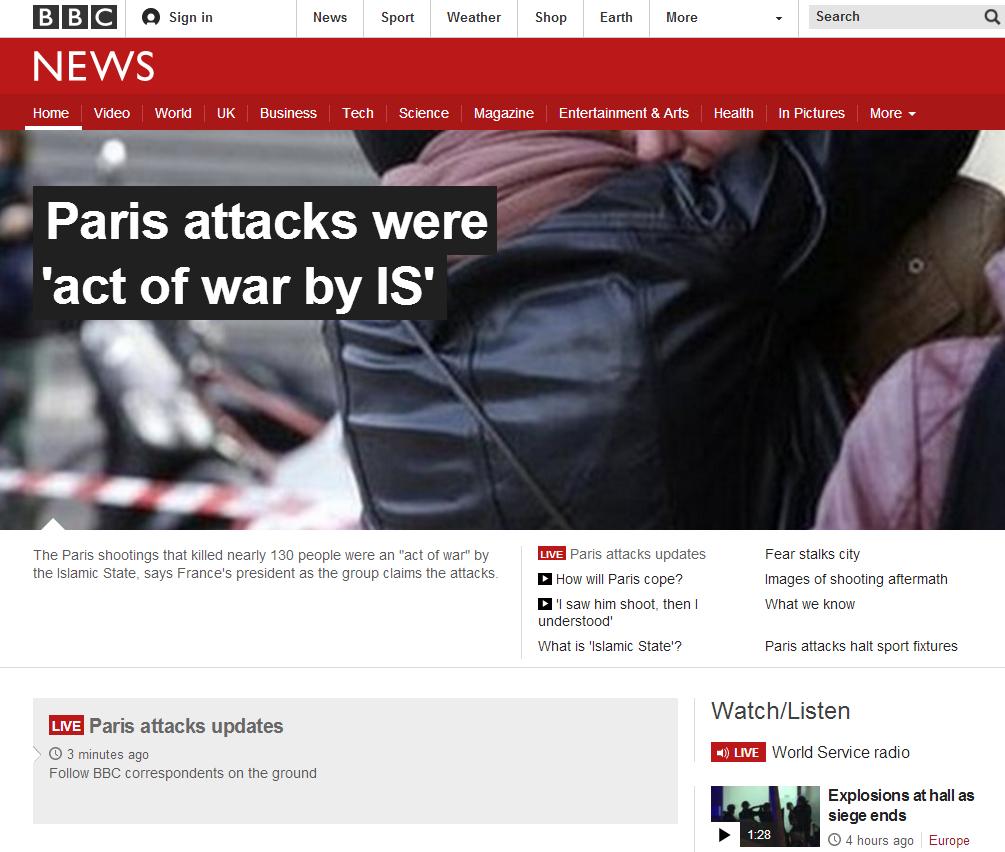 The sight (and formatting) of this headline is shocking to see, full-screen: it turns my stomach somehow.

There is nothing else in the news headlines, at the moment, it occupies every news slot:

I remember the TV news reporting the 9/11 attacks in New York. Two or three weeks later the TV was still replaying or showing the same photos of the infamous footage, and I switched off the TV news and I haven't watched American TV since then. The subsequent invasion of Iraq by the Coalition of the willing (not to mention the invasion of Afghanistan) seems to me related to that kind of propaganda.

With respect and assuming you want to know the world news, I invite you to contrast the 130 dead in Paris with the number (hundreds of thousands) of people killed and homeless in (for example) Syria.

My specific suggestions are:

The French have a word "affoler" which literally/etymologically means "to make crazy". Here are some definitions of it from the 'net:

Avoiding this kind of "folly" within yourself might be a good beginning.

From a Buddhist perspective, it is breaking of the first precept at large scale. The root cause can be any of the 3 roots of evil.

As Buddhists, we can practice the four divine abodes.

Muditha towards those who were able to escape the attack.

Uppekkha towards all as they are the owners of their deeds which lead them to happiness or suffering.

You can also use the shock factor to realize how dangerous Samsara is and how fragile life is. That'll help you loosen the bonds of lay life.

Can we as the global society do anything to heal the divide?

Teach and practice the Dhamma and encourage others to practice as well, just like how the Ariya-sangha would do.

I feel beyond horrible about the tragedy. I don't even think that I can articulate how I really feel—it's a complex medley of negativity, swirling with many different emotional elements. Yet the first thought that enters my mind, when considering it from a Buddhist perspective, is simply: There is suffering.

I, too, wonder what could be accomplished in terms of healing. I worry that "healing" may not even be possible; that the patterns of behavior across recorded history show us that there is an inevitability to perpetual conflict, hatred, and killing. It feels easy to succumb to a feeling of helplessness, but at such times it's even more important to stick to the path. Right Resolve is key.

Maybe there is no complete healing. Maybe the most we can ever hope for is simply managing through the day-to-day: to do the best we can to follow the path to end suffering; to model the views and behaviors that form the path; to live it daily and in so doing remain a source of inspiration and peace within a world that's always in need of love and kindness in the face of hatred and death.

There is suffering. Simple words that can apply equally to a small scratch or a mass killing. But in the end, all we can ever really do is follow the path.

Samsara is the tragedy. If everything happens is determinable by Karma or other deterministic set of laws then there is no motivation and perhaps the chance to leave Samsara. In this case it can be combination of Karama & randomness and wrong view and motivation at play. Such events can be inspiration to strengthen your practice so that such calamity does not befall you in Samsara.

The Buddhist world view is informed by the miracle of compassion and loving kindness as much as the wisdom of impermanence.

Just as a farmer cannot hope to achieve much by working hard the day before a harvest, a Buddhist cannot produce greater compassion or understanding on days of tragedy if she does not practice it in the midst of the petty suffering of daily life.

The best antidote to suffering is to first recognise our suffering and be fully present in this moment for it. The suffering is real, even if only at the level of our feelings and emotions, so we must embrace it fully. We must not try to forget it, or blind ourselves to it.

If possible we must also try to embrace the attackers and try to understand the deep suffering the attackers must have felt for several months or years to set out on this course of violence. They were not capable of turning their suffering into love, but if we can manage that, we have performed a great miracle.

May we hope that today's victims do not become tomorrow's attackers, and send metta to all, so that the miracle of love and compassion maybe born.

I am reminded of a poem by Thich Nhat Hanh, "Please call me by my true names"

If anything, the umpteenth event of this kind shows once more that the praxis is the sole source of knowledge, especially when compared to the reading of books of any doctrine, explicitly religious or not, reading which does nothing but develop faith, instead of removing doubts as with the praxis.

Perhaps the republics institutionalizing the liberal democracies could render mandatory the vipassana-samatha mediations in their mandatory school programs, such as they do in few of their prisons or for their cancerous, even though the buddhist morality --- that is to say the dhamma put into praxis --- which is required to get any result remains in strong contrast to the morality of the Human rights whereon lie the doctrine that is the initial classical liberalism and its various contemporary refinements.

The lack of praxis is the sole effect of the faith in a rationalism supporting a doctrine (religious or not), sometimes more or less blend in some bastardization of empiricism, in order to acquire knowledge, whereas the traditional quest of the rationalist, especially the one who qualifies himself as secular, since this is all that he has, to link the productions of the mind, which are the abstractions, to the « states of the world » remains sterile, thus far. And the desire for western academic to find a political philosophy in the dhamma --- that is to say to construct and then having faith in such political structure in sanctifying it, à la Human Rights --- shows how deeply misguided he is through another tragedy of the occidental rationalism claiming to be a occidental humanist and seeking some salvation through some concrete objectivity via a universalism, since, let's face it, he more or less understands that his Human rights are nothing but universal in a performative manner...

The problem of the occidental humanism is the explicit lack of praxis of the human rights, either a personal praxis or even a social one, since there are very few rituals in any liberal doctrine; and the faith in its imposition on the children in formatting them through the national education demonstrates solely his despair. This education could a good strategy, but given that they still need the justice and the police today, it fails de facto.

Naturally, the rationalism not being bound to the occidental humanist, the same lack of praxis is detrimental in any other doctrine putting an emphasis solely on the reading of their conventional texts. It is always the same problem, irrespective of the doctrine, religious or not : how can the few proponents of such doctrine manage to get dozens of millions of people, who were birthed by parents precisely not following the doctrine, into adopting a doctrine which is not theirs spontaneously ? There is no answer to these besides a mixed of proselytism and imposition, more or less explicit. And The dhamma does not show a proselyte face. So what can the buddhists do ?

Once entered in the stream, the followers of the dhamma knows that the human conventions will not save anybody. These conventions in the West take the form, today, of legal laws and scientific laws. This loss of faith in politics, in views consolidates his doubts on a structure to manage people inside a nation (assuming that he has faith, beforehand, in the relevance of the concept of nation).

As usual, the sole display of a doctrine is through the action of its followers. Concerning the dhamma, the buddhists must accept that the majority of the people will not follow the dhamma, that a minority will be explicitly against it, that a minority will show a few fruits of the dhamma without even following it. The buddhists must show how good buddhist they are; in one word, how good they are in being equanimous and benevolent, towards themselves and others, at any time and any place...

Not the answer you're looking for? Browse other questions tagged modern-world killing or ask your own question.

5
What is Buddhist Modernism?
10
Buddhist practice and physical exercises
5
The buddhist dillema on lesser evil
3
Was Steve Jobs a Buddhist?
0
What's the Buddhist perspective on permanently eradicating bedbugs? (Extinction)
2
Should a Buddhist go to the gym?
5
Can a Buddhist use antibacterial soap?
2
Doctor assisted suicide - does doctor break the first precept?
2
Is there an API for Buddhist texts?
1
Is there anything I can read about the Buddhist tradition today?