I am a student of art and I am studying on Buddhist art .In the Vihara of Bhaja there is a decorated wall with two important gods of Hindusim, namely Surya and Indra. It refers to the Shunga period. 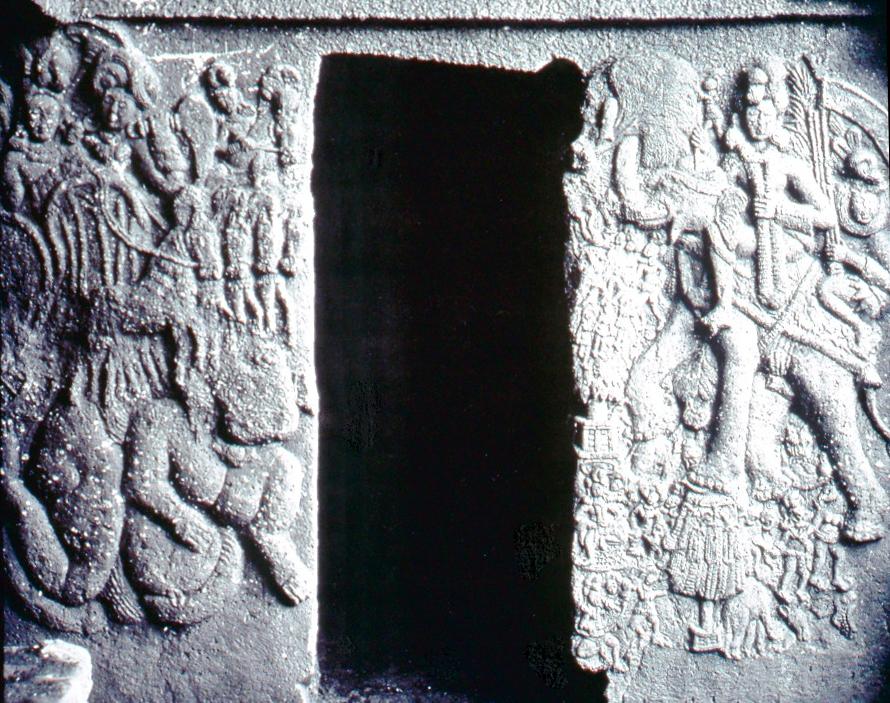 From Wikipedia, Buddhism and Hinduism:

Hinduism and Buddhism, have common origins in the Ganges culture of northern India during the so-called "second urbanisation" around 500 BCE. They have shared parallel beliefs that have existed side by side, but also pronounced differences.

The Bhaja Caves date to around 200 BCE, so at the time of the relief carvings, Buddhism would only have been around for roughly 300 years. At this point Buddhism would have been considered fairly "young", and would have lacked as much of the independent symbolism, art, etc. that we see today (after the passage of ~2,200 years).

Within the first 300 years of Buddhism, mainstream society in India would still have been very much Hindu-oriented. Hinduism would have been everywhere, reflected in all aspects of daily life. So it follows that artists would have used familiar symbolism and artistic subjects, taken from the Hindu-driven mainstream culture.

This is, of course, as good a guess as any. We'll never know that specific artist's personal motivations or the circumstances that led to the choice of those particular carvings. But looking back on the period holistically, I don't think it's too surprising that we'd see a lot of Hindu art everywhere, even in and around "Buddhist sites".

As to Buddhism there is a kind of beings who are much like Gods that you mention they were given the name "Deva".

As to Lord Buddha there are 2 Devas with the power and authority over moon and the sun.

The one with power and authority over sun is called - Soorya/Surya divya putta.

If you are referring to the One upon the elephant please know that "Indra" is not the only one on a elephant.There is another called "Sumana saman" (Praised to this day in Sri Lanka) who met lord Buddha personally and made a temple himself.

I like to remind you that many of the suttas (Teachings) in Buddhism begins with a mentioning of a god who visited Lord Buddha and asked the question which resulted the teaching.

And i would like to point out that god called "Vishnu" who is very famous in India is a name found in Theravada Buddhism.As to Buddhism these are somewhat alien beings to earth who accepted certain beliefs and resided in certain areas of the earth.Buddha even said it directly and went on to mention their society,planet,body structure and so on.Lord Buddha even visited them in their own planet.And they used to visit Lord Buddha every morning.

I do not know your religion so if i offended something you believe i am sorry.But for us Buddhists all the Hindu gods are either fake or beings from another planet.

The picture of your's does not contain any solid evidence to back up the theory that it is actually "Indra",as to my knowledge an elephant is a sort of a highly regarded animal in Buddhism and that person on top of the elephant could be anyone from a Kind to a Deva or Sakra (the king of Devas)

5
Did the Buddha discourage antropomorphic representations of himself?
0
Why this hair style on statues of the Buddha?