Did the Buddha form a monastery?

According to Wikipedia's Buddhist monasticism article, the Buddha formed the first monastery. There is no source, 'though. To quote:

Buddhist Monasticism is one of the earliest surviving forms of organized monasticism in the history of religion.

The order of Buddhist monks and nuns was founded by Gautama Buddha during his lifetime over 2500 years ago.

Ok, so it doesn't specifically say 'monastery' here but still, an order of monks and nuns, some sort of precursor to a monastery at least.

According to History World's History of Monasticism:

Leading his followers into holiness a generation after Mahavira, Buddha also organizes them into communities.

Is this just "according to tradition" or is there historical evidence of him forming a monastery/order/community: such as archaeological findings or non-religious texts? If yes, is there's anything left of the original or has it all branched out?

The Buddha often taught in forest groves, the most famous being Isipatana (Deer park) where he delivered his first lecture (Dhammacakkappavattana Sutta),

and Jetavana (Jeta Grove) (famously recorded in Buddhist epics as purchased by Anadapindika by paving the ground with gold) where there's still believed to be architectural remains of the Buddha's hut (Gandhakuti) from his stay there. Buddhist texts record that there were several imposing architectural structures constructed there, including an imposing arch, though almost none of it remains today.

Some of the chief buildings attached to the Jetavana are mentioned in the books by special names, viz., Mahāgandhakuti, Kaverimandalamāla, Kosambakuti and Candanamāla. SNA.ii.403. Other buildings are also mentioned - e.g., the Ambalakotthaka-āsanasālā (J.ii.246). According to Tibetan sources the vihāra was built according to a plan sent by the devas of Tusita and contained sixty large halls and sixty small. The Dulva also gives details of the decorative scheme of the vihāra (Rockhill: op. cit.48 and n.2). 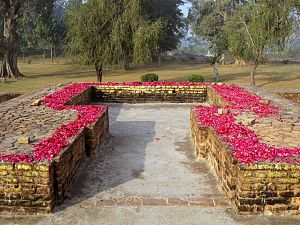 There's also Vulture's peak, frequently referred in the suttas as one of the Buddha's favoured places to retreat to. 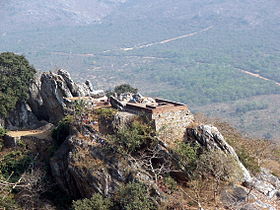 Many of the other locations that are referenced in the suttas, or where ruins of buildings still exist feature prominently on buddhist pilgrimage routes.

In later periods very prominent Buddhist Viharas, or universities functioned for over a 1000 years at the same spots, namely at Taxila (present day Pakistan) and Nalanda (present day India). They housed at their peak thousands of monks and novices, living and training for years together. Eminent personages such as Shantideva, the 8th-century Indian Buddhist monk and scholar emerged from these universities. 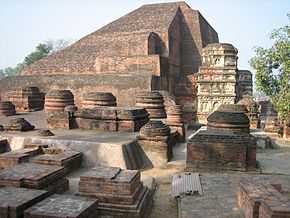 Perhaps the communities didn't exactly live in "monasteries" during the Buddha's time (though Buddhist monasteries were built later). See:

I might be wrong though: I don't know when the first monastery building is alleged to have built.

Something like the Mahabodhi Temple was apparently built maybe a hundred and fifty years after Buddha, when Buddhism became the state religion under the Emperor Ashoka, likewise the Maya Devi Temple.

The Buddha didn't find monastery, but when he start to sharing his teaching with people, they offered some places for the Buddha and his Disciple. Furthermore, he made a rule for monks and nuns which in raining season(3 month), they should be stay one place without wondering as usual.

(Mv I 13: Bimbisārasamāgamakathā — The Discussion of the Meeting with (King) Bimbisāra: The King of Magadha, followed by 120.000 householder an Brahmans, approached the Buddha and received the Dhamma. The King Bimbisāra of Magadha offered the first monastery for the Saṅgha and the Buddha allowed his Bhikkhus accepting monasteries.)

There are some archaeological evidence available, for example:

This paper presents data from a recently documented hilltop Buddhist complex called Mawasa, in the Raisen district of Madhya Pradesh, central India, about 15 km to the east of the UNESCO World Heritage site of Sanchi. It was documented during the Sanchi Survey Project, a multi-phase exercise aimed at relating the histories of Buddhist monasticism and urbanism as represented by the sequences at Sanchi and nearby Vidisha respectively to archaeological patterns within their hinterland. The dataset at Mawasa offers a well-preserved and representative sample of many of the main architectural types found at Phase II (c. 2nd - 1st century BC) Buddhist sites in the study area. It includes a well-preserved stūpa, a carved slab with an early and unusual Brahmi donative inscription, and a group of interesting platformed monasteries with well-preserved internal details. All of these provide important new insights into the nature of patronage and the history and chronology of Buddhist monasticism and monastery architecture during this early period of Buddhist propagation. Further, an enigmatic structure, the precise function of which remains unclear is located within the site. It may be a very early shrine of a hitherto unstudied form, and thus has potential relevance for the wider history of early temple architecture.

Not the answer you're looking for? Browse other questions tagged the-buddha history monasticism or ask your own question.

4
What exactly were the parks that the Buddha spent time in?