Purpose of scattered thing or food under tree?

We often see things scattered under the main tree in the Buddhist Theravada temple yard. There is also fresh fruit cut open. It seems they are put under the tree deliberately and regularly. Does anyone know what is the purpose of this?

The fruit etc is probably offerings to the spirit that lives in the tree. Worship of tree spirits (or dryads) is widespread through South and South-East Asia, and a very common element of traditional Buddhism. In Thailand such spirits are known as Nang Mai. 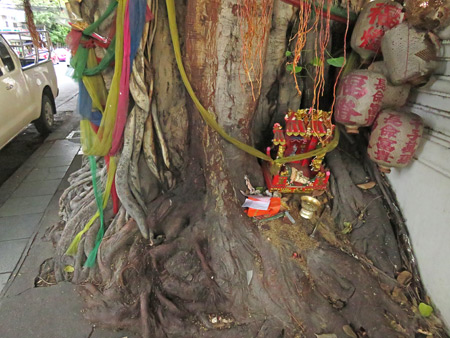 Other trees were worshipped and given offerings because the spirits were believed to grant wishes. Milk and water were poured on the roots, garlands were hung in the branches, lamps of scented oil were burned around them and cloth was tied around their trunks (Ja.II,104). There is the occasional mention of animal and even human sacrifices being made to trees. The victim’s blood was poured around the foot of the tree and the entrails were draped over the branches (Ja.I,260; III,160).

Many animist elements, such as yakṣas and nāgas, are evident at every level of the early Buddhist texts and must have been assimilated very early on.

According to the London Buddhist Vihara website offerings of flowers etc, and food, are made from feelings of devotion and not with the expectation of reward.

In some Asian countries they will set out food as offerings so that hungry ghosts can make merit. In some instances they will even build tiny houses for them.

Feeding local animals is also a form of generosity, it could be for that reason as well. You could wait near the tree in silent meditation until the food scattering person arrives and ask them personally for the best answer.

Not the answer you're looking for? Browse other questions tagged theravada traditions food or ask your own question.

9
Usefulness of attending a Thai temple in the United States
14
Emotional Support without God in Theravada
4
Theravada perspective on transgender people
6
What is the Theravada Buddhist lay lifestyle?
2
Upaya in Theravada Buddhism and the Pali Canon
3
Difference between Theravada's self and Mahayana's intrinsic essence
2
Suffering due to non-self-related preconceived notions in Theravada
5
Too much Dhamma in modern age
1
When and why did the color orange (and yellow and 'red') become associated with Buddhism?
3
A question about DN 23 and existence of soul