What is the historical origin of Vajrapani?

I've always found the imagery of Vajrapani (a wrathful Bodhisattva) very evocative. I'm reading a little bit about him and how his form is to do with energy and power in service of the Dharma so he is of course a positive figure. 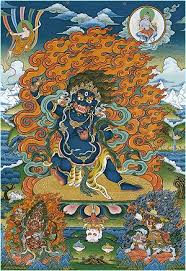 But I'm just wondering if anyone knows about the history of this figure and wrathful deities like him. Is he from the Tibetan culture and does he predate Buddhism coming into that country. Also is he a deity that perhaps had negative connotations (a demon perhaps) that Buddhism has co-opted?

A footnote fills this out:

In the sutra teachings, ''the lords of the three families" -- Manjushri, Avalokiteshvara, and Vajrapani -- are among the eight great bodhisattvas in the retinue of every nirmanakaya buddha such as Shakyamuni. In the ... context ... of the Vajrayana teachings, they are emanations who are not separate from the expounder of the tantras, whether Buddha Shakyamuni or the primordial buddha (usually referred to as Samantabhadra or Vajradhara, who expounded tantras considered to predate the historical Buddha). In the tantras, these emanations are part of the naturally manifest retinue that appears in the sambhogakaya realm of Akanishtha. In the sutras, these bodhisattvas are peaceful manifestations; in the Vajrayana, the emanations may appear in either peaceful or wrathful forms.

So, no negative connotations I'd say! I know Vajrapani appeared in Sanskrit first because he's mentioned in Ch. 10 of 'Way of the Bodhisattvas,' by the 8th century Indian buddhist monk Shantideva. Wiki mentions the earlier sutra that may have been Shantideva's reference (see link in comment).

David Lewis is correct that Vajrapani is mentioned in the Pali Canon. It's hard to tell though, because his name is just translated rather than being left alone. He is mentioned in DN 3, the Ambaṭṭha Sutta. The relavent passage is:

Now at that time the spirit who bears the thunderbolt stood over above Ambaṭṭha in the sky with a mighty mass of iron, all fiery, dazzling, and aglow, with the intention, if he did not answer, there and then to split his head in pieces. And the Blessed One perceived the spirit bearing the thunderbolt, and so did Ambaṭṭha the Brahman. And Ambaṭṭha on becoming aware of it, terrified, startled, and agitated, seeking safety and protection and help from the Blessed One, crouched down beside him in awe, and said: ‘What was it the Blessed One said? Say it once again!’

If we look in the Pali this paragraph goes:

It is spelled vajirapāṇī just because in Pali you aren't allowed to have an r immediately after a j at the end of a syllable, so an I is added to make it easier to pronounce. The meaning is the same, and it means one who bears the Vajra (thunderbolt)

One source in which the history of Vajrapāṇi is discussed is the book Indo-Tibetan Buddhism by Snellgrove. He traces him to the Pāḷi figure Vajirapāṇi, and tries to show how we developed. Another useful source for Vajrapāni and wrathful deities generally, is the book Ruthless Compassion by Rob Linrothe, which focusses on changes in Indian art over time.

There's a long gap in the story from Pāḷi to Tantra. It took many centuries for the worship of bodhisatvas to develop (ca. 4-5th centuries CE) and more centuries again for images of them to start appearing.

Not the answer you're looking for? Browse other questions tagged history bodhisattva or ask your own question.

7
What is a wrathful Buddha?