Is there a sanskrit translation of the Pali tipitaka online?

I see the ambatta sutta in pali and in English, but my personal preference is to read it in Sanskrit. Is there a sanskrit translation available online (say in a scanned book at archive.org)?

Very few of the early Buddhist texts survive in Sanskrit translation. Also the Sanskrit translations were made relatively late, perhaps the 4th or 5th century CE and they had frequently been substantially changed by this point. For example the Samaññaphala Sutta does survive in Sanskrit, but it is a very different text (and as far as I know, only available in a PhD thesis).

There is a comprehensive list of parallels in different languages on a website called Sutta Central. In the case of the Ambaṭṭa Sutta there are only fragments of a Sanskrit text extant. Most of these are only in manuscript form.

The Pāḷi Canon (in the Burmese, 6th Council Edition) is available in Devanārarī and a number of other non-Roman scripts via tipitaka.org 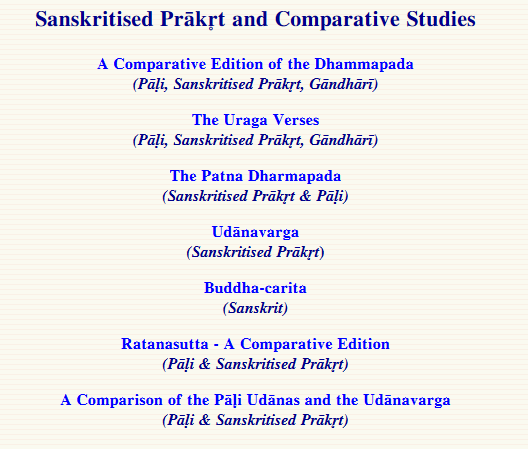 The Pāḷi Dhammapada is the second collection in the same Nikāya. Although many of the texts in the Suttanipāta are found to have parallels in Sanskrit (and also in Chinese and Tibetan translations), there is no sign that this collection as such ever existed outside of the Theravāda tradition.

Not the answer you're looking for? Browse other questions tagged pali-canon reference-request books or ask your own question.

1
Where can I find the Sanskrit versions of Tripitaka?

15
Is there any benefit in learning Pali or Sanskrit?
16
English (or other European) translations of Pali Canon
6
Prajñāpāramitā Hṛdaya Sūtra in Sanskrit with English translation
4
Does knowing Pali/Sanskrit (and to which level) give one more insights while reading Buddhist scripts?
3
Is there any reference scheme for paragraph in Sutta?
0
Is there an online copy of English translation of Pramanavarttika of Shri Dharmakirthi?
0
Are there any commentaries in the pali cannon on The Iddhipāda-Vibhaṅga Sutta -- An Analysis Of The Bases Of Power (SN 51:20)