Why are Buddhas always Indian, male and human?

Dipankara, Siddhartha Gotama, Maithreya to name a few (of the 28 named in the Buddhavamsa) - it feels a bit like a Hollywood plot where it's always only an all American hero that fights off the alien invasion of planet Earth.

The question has two parts. Why only one Buddha? This is only in the Theravāda. In other Buddhist schools two, five, or up to millions of Buddhas can be seen. Two in the White Lotus, Five in the five Buddha Maṇḍala (featuring Vairocana Tathāgata, Akṣobhya Tathāgata, Ratnasambhava Tathāgata, Amitābha Tathāgata, and Amoghasiddhi Tathāgata), and an infinite number in the Avatamsaka Sūtra. Most non-Theravādin schools accept the existence of multiple Buddhists. 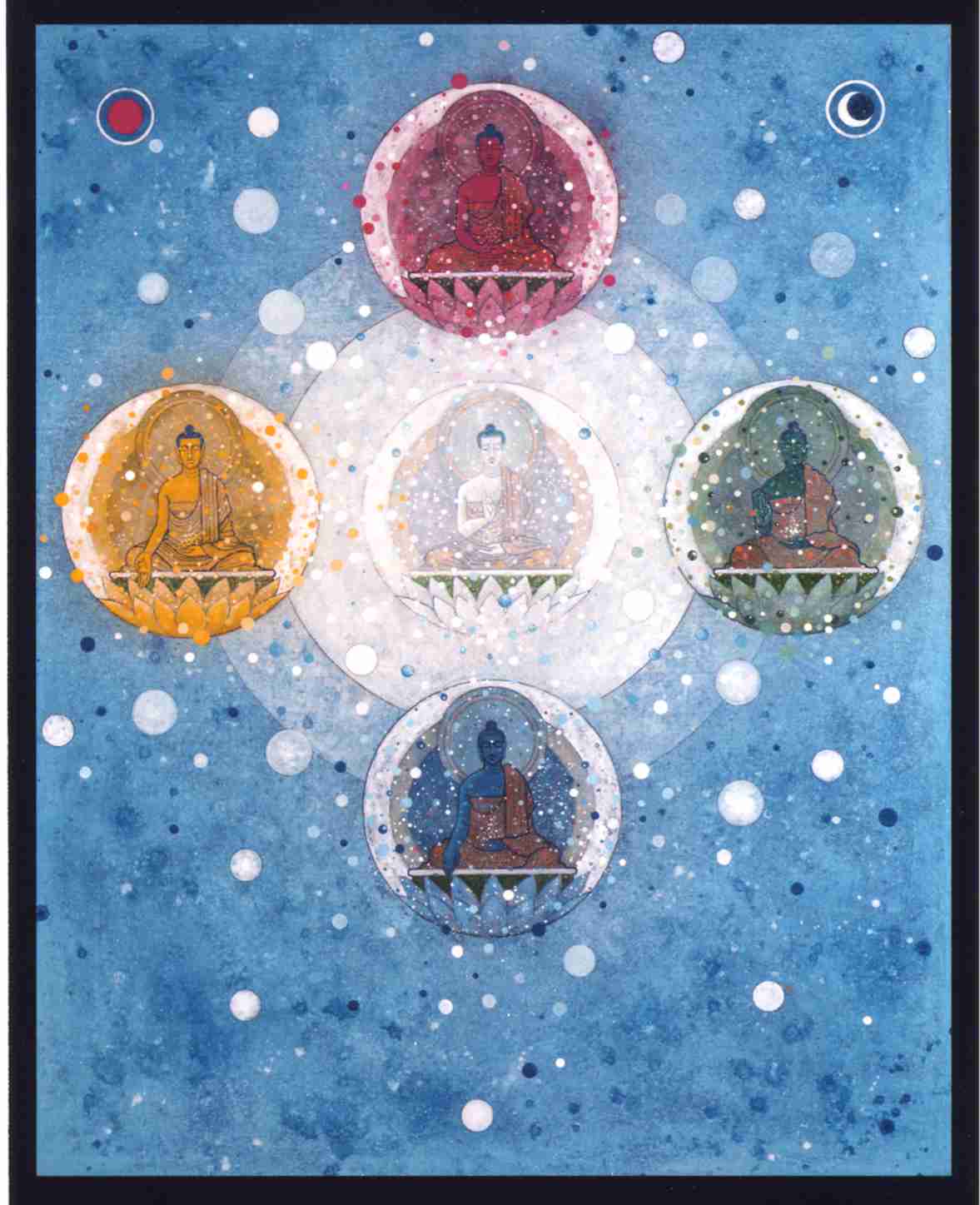 The second part is why ethnically North Indian? Artists in different countries tend to depict the Buddha as having features similar to their own ethnic group, and besides have nationally distinctive styles, so one can usually tell say a Khmer Buddha from a Chinese, or a Tibetan. Many of the Buddhist artists (the image is by my colleague Dharmacārī Āloka) I know paint the Buddha as similar to themselves - since most of the artists I know are English or Kiwis, their paintings tend to look Anglo-Saxon. But there's nothing to stop, say someone of African descent portraying the Buddha as African.

And of course there is some cross over. So Khmer artists tend to portray solitary Buddhas but with Khmer features, whereas Tibetans portray many Buddhas with Tibetan features. For some artists it makes sense to portray Gautama Buddha as an Indian because it seems more historically authentic, though of course we do not know the ethnic identity of Buddha - it's possible the Śākyas originally came from Iran for example.

Given my time with the reading & practice of Zen, Buddhism & Sanatan dharma with a lot of spiritual people, I'll answer this from a different Point of View.

Jayarava's answer is perfectly accurate to say why people in various places and cultures portray the enlightened Master the look up to in different ways.

it feels a bit like a Hollywood plot where it's always only an all American hero that fights off the alien invasion of planet Earth.

A lovely thing I remember hearing some time back if you want to learn:

India, or I will refer to a more accurate word for the region currently labeled by the British as India; Bharat by its name & history has been the center of spiritual evolution & wisdom; flavors of knowledge & wisdom have emanated from that region.

Each person & place has to play a role, something special to play its karma in the universe.

So, while Americans always fight off alien invasions courtesy of their Hollywood machinery and brilliant influence on world pop culture, silently the spiritual flavors of ancient wisdom have been reaching the corners of the world over centuries or more.

The word Hindu is inaccurate as it was derived from 3 pieces that make up H-Indu-Sthan. It was the name given by those that traveled to the Indu river valley

Everyone, every place, every nation, every atom & molecule have to play their part in the universe which has been labeled as both:

Which is the reason why people traveled to spread the word.

Its also the reason why the missing years of Jesus, it is said he was in Bharat, in an area called Kashmir where his name has been found mentioned as 'Isa' or 'Issa' {pronounced: Eee- Saa - h}

There have always been Masters like that all over the world. If you look for them, you will see there above lies your United Nations.

Spirituality unites or actually reminds us its all one.. Union.. Yog.
Ego & material nature of human beings draws lines & divides us into Nations.

Adding a note since someone hit negative on my answer :) just because they disagree - opposite of what Buddha or any enlightened master teaches us.

So, Masters did not belong to Nations. If anything, every time a Master has come to the planet, they have come to help whoever they can reach, directly or indirectly.

Hence, people take on rituals & rites, methods & flavors; and later even fight with other groups over those details.

Masters do not create factions, they join everyone, or should I say they are here to "remind" and "make us realize" that we are already ONE.

So, when they teach LOVE thy neighbor or Compassion, those are not for the other, but to for US, to realize the Oneness and practice it as something you are not doing for other, but for yourself :)

Hence the term "self realization", reminding and realizing that we are the all-pervasive universe - everything & nothing. :)

first of all Alex S is right about what he said,But i think a response from Theravada must be added to this. As we believe there is a special planet in the universe,the planet is always earth.But this time it was India next time it will have a different name.As we believe the place Lord Buddhas will achieve complete wisdom will always be the same.If you want to look in to this search for the word "Mangala / Magul Sakwala"

Not the answer you're looking for? Browse other questions tagged the-buddha buddhas gautama-buddha or ask your own question.

5
How many Buddhas are there?
4
Who are the Buddhas Yet to Come and what Information do we have about them as per Theravada standpoint?
1
Who are the past Buddhas mentioned in the Canonical Works?
3
Who are the Buddhas of the three worlds in Ryōkan's poems?
11
Why can't private buddhas just tell people what they did to achieve enlightenment
3
Why Shakyamuni Buddha choose Indian subcontinent as a favorable place to teach Buddhist way of living?
4
Why didn't some of the previous Buddhas preach the code of discipline?
5
Why are there are only one Buddha per universe?
1
Buddhavamsa and the 29 Buddhas