What is a headman?

In many suttas in the Pali canon, the term headman is used; for example Yodhajiva Sutta. What is the Buddha referring to when he calls his visitors "headman"? Thank you.

India and much of the world at the time of the Buddha had a fairly decentralized devolution of power in keeping with the capabilities of the times. Often it would be months before news from the farthest corners of the kingdom reached the King's court, so real power and responsibility rested with local authorities like the headmen.

They were more than just bureaucrats, their function was more akin to a father figure, who would educate and care for his people. It was likely that the headman would take the day off to visit and listen to the Buddha, and then return home and recount the teachings of the Buddha for his village. In all likelihood the headman was also literally the father figure, since a large family of uncles, cousins and extended relations often settled down together to form a village (clan).

Unlike modern day mayors who rotate out of office, the headman post was usually for life, and so it was a very personal relationship one had with one's village, and hence the care that head men often seem to take in quizzing the Buddha.

The sixth class of Indians are those called over-seers. They supervise everything that goes on in the country and cities, and report it to the king, where the Indians are governed by kings, or to the authorities, where they are self-governing. It is not lawful to make any false report to them; and no Indian was ever accused of such falsification.

I found a book on google books explaining what a "Headman" is and how he is elected. It's not possible to quote from the book so here is a screenshot and a link to the source.

In short it says that a headman is elected by other villagers and that his asignments are administrative tasks in a village. He has other tasks too since in some litterature it's mentioned that he takes care of business when e.g. someone has stolen something in a village. Here is link to a book wherein a headman must make a decision about a wandering monk who has stolen twice.

So it sounds like a headman is the authoritative figure of a village. A boss of some sort. 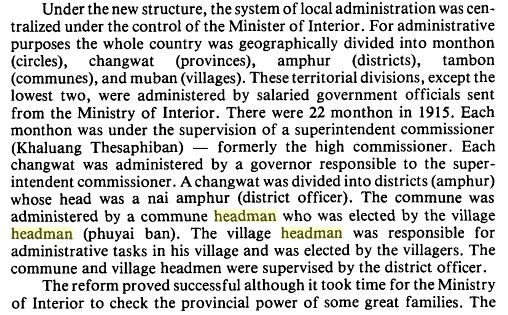 Not the answer you're looking for? Browse other questions tagged pali-canon terminology or ask your own question.