I've read that he is very conscious of the fact that after his death, there will be much turmoil, and it's something he thinks about often. "When I pass away, when I die, of course a setback. Very serious setback," he said in an interview. I have read/heard, though I cannot at present time point to the source (I can research further later and add citation, if necessary), that he is aware that many, perhaps thousands or tens of thousands, will commit suicide after he dies.

I believe the Dalai Lama has voiced opposition to suiciding for protests, that it violates Buddhist ethics—

"In the past, he has condemned self-immolations, which many Buddhists believe are contrary to their faith, but has until now kept a low profile over the recent wave of protests."

And he is quoted as saying:

"Some people commit suicide; they seem to think that there is suffering simply because there is the human life, and that by cutting off the life there will be nothing... But, according to the Buddhist viewpoint, that's not the case; your consciousness will continue. Even if you take your own life, this life, you will have to take another body that again will be the basis of suffering. If you really want to get rid of all your suffering, all the difficulties you experience in your life, you have to get rid of the fundamental cause (greed, hatred and delusion) that gives rise to the aggregates that are the basis of all suffering. Killing yourself isn't going to solve your problems."

—so my question is: If in fact many plan to suicide when he dies, why will they act in a way that is antithetical to their teachings, specifically the beliefs of their religious leader? It seems to this Westerner a totally illogical reaction. My perception, not criticism or judgment, is that it's especially irrational considering Dalai Lama's objection to suicide, Buddha notwithstanding: "If one knows how to treasure oneself, one should protect oneself well."—The Buddha (Dhammapada)

Can light be shed on this question? If I have been misled about the intentions of many followers to terminate their existence as a result of his passing, then my question should be deleted. Also, this is not the same question as "What are the consequences of the 14th Dalai Lama being the last one?" because it's not about the order of things but rather about the contradiction of ethics and action which I am unable to reconcile, hence the question, which I realize hinges completely on the report of planned suicides following his death, and I'm currently scouring for sources (I think it was an NPR radio program, perhaps).

History of martyrdom in Buddhism 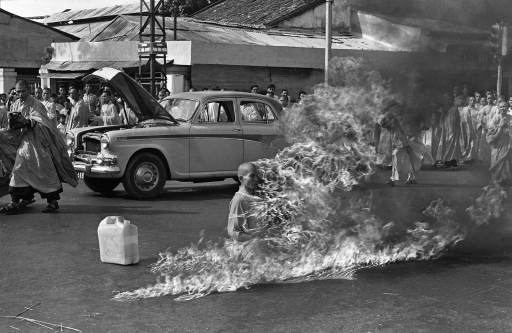 The Burning monk of Saigon, Thích Quảng Đức is perhaps the most famous of monks in recent times who self immolated for a cause, however he is hardly the first, in fact he follows a very ancient precedent set since before the beginning of history in Buddhism. The Buddha in his life just preceding his Buddhahood offered himself to a hungry tiger in keeping with his Bodhisattva vow of placing others before the self.

Taking the Bodhisattva precept of protecting others can mean sometimes, usually very senior monks, will set themselves alight, or feed themselves to insects or abandon their body in other ways for a worthy cause.

Often the miraculously unburned tongue or heart is enshrined as a holy relic as a mark of the Bodhisattva's faith.

Technically, this isn't suicide but heroic martyrdom of the non-violent kind.

As a monk, the Dalai Lama is bound by the pattimokha (monastic rules) to not praise the desirability of death. Any monk who praises death, commits a Pārājika (very grave) (literal translation: defeated one) offence, and entails expulsion from the Sangha.

The Dalai Lama is not any ordinary monk, he knows his word carries enormous weight. If he were to even hint that martyrdom would be appropriate, tens of thousands would self immolate, or destroy themselves without a second's hesitation.

Therefore he is perfectly correct on both humanitarian and monastic grounds to insist vehemently that suicide is not an option.

Last, but not least, it is also tactically wise, since the Chinese would wait for just such an opportunity where a nuanced but confusing utterance can be turned into a controversy. He has to be very careful as a leader of a people, in issuing fool proof statements that cannot be misinterpreted.

However, Buddhism is first and foremost about personal responsibility. As rational beings, Buddhists can weigh the odds and decide for themselves if martyrdom is worthy. Certainly there is room for violating the mundane order of things, when one operates on a rather high level of attainment.

Thus, they are not disobeying the Dalai Lama, as much as respecting their inner conscience and spiritual path.

Often times such acts of martyrdom arise from pure Bodhisattva nature, however sometimes it is a copy-cat act done under peer pressure. Hopefully the Dalai Lama's objections will dissuade the latter kind.

Not the answer you're looking for? Browse other questions tagged ethics tibetan-buddhism suicide dalai-lama or ask your own question.

5
What are the consequences of the 14th Dalai Lama being the last one?

12
Secular Buddhism and Suicide
0
Can effective altruism (specifically Earning to Give) and Buddhism co-exist if Earning to Give was done to the extreme?
2
Duty to parents?
2
Why did Tsongkhapa list guru devotion first in his Lamrim while Atisha did not?
1
Why does Lama Atisha say those "observing pure conduct" shouldn't take (some) Tantric initiations?
6
Is Buddhist practice a form of suicide?
0
Buddhist views on talking with the dead? Is it possible?
3
How does one effectively understand & navigate through the suicide cases found in the canon?